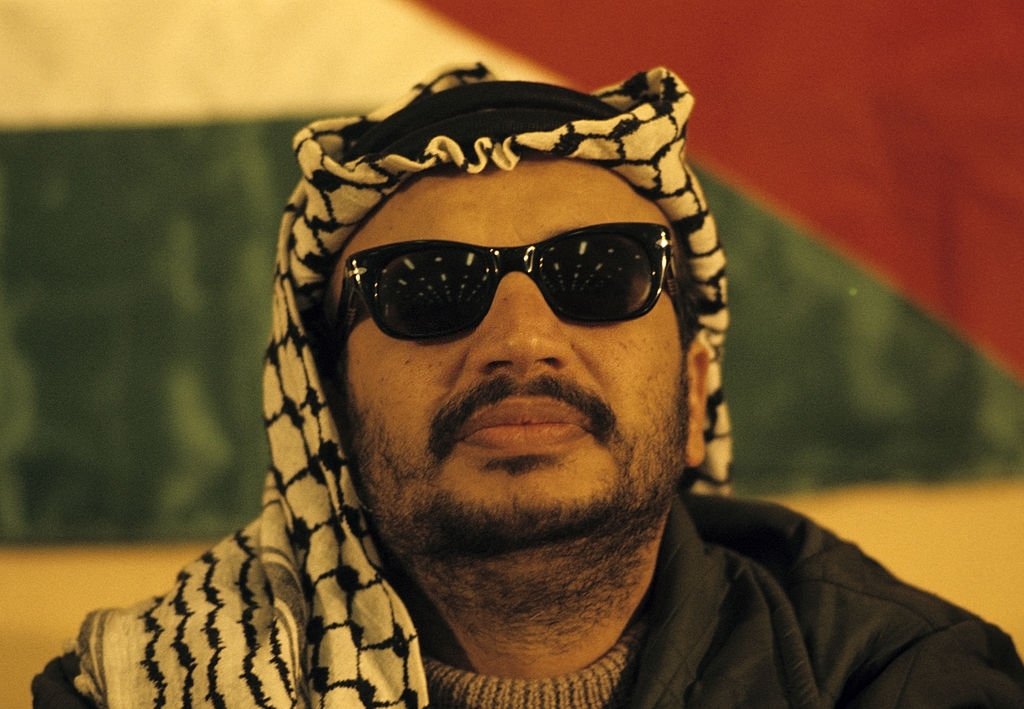 Remembering the passing of our leader Yasser Arafat

The birth of the great leader

The leader president was born in Jerusalem on August 4, 1929 as Muhammad Yasser Abdul Ra’ouf Daoud Suleiman Arafat al-Qodwa al-Husseini. At the age of seven he witnessed some of the events of the Palestinian Revolution of 1936 which affected the leader’s life. He was educated in Cairo and participated as a reservist officer in the Egyptian army. He was an active member at a young age through his activities in the Palestine Student Union, which he later became its president. During the 1950s he had the idea of establishing a movement to liberate Palestine with Palestinian nationalists. Later, in 1957 FATAH movement was born as a Palestinian Liberation Movement in Kuwait.

With the rise and the influenc of Yasser Arafat in parallel with the rising popularity and status of Fatah Specially after -Al Asefa- armed struggle. He became a national leader and a hero in the victory of peoples and supporters of Third World problems, left and revolutionaries in Europe and the rest of the world. Even his Kuffiya was recognized by the whole world. In the Fifth Palestinian National Council which was held in Cairo at the Arab League headquarter in February 1969 Arafat was nominated as Chairman of the Executive Committee of the PLO. In 1982, the PLO leadership moved its bases to Tunisia, where it remained until it relocated to Gaza in 1994.

At the end of 1969, Time magazine published his picture on the cover and awarded him the title of Man of the Year.

Yasser Arafat had appropriate conditions for the development of the revolution and struggle against the occupation, where there were large numbers of Palestinian refugees in Jordan. President Yasser Arafat trained many young Palestinians for the resistance operations against the Israeli occupation, through infiltration across the border and the Jordan River.  Arafat insisted to be in battle with Fatah  fighters and leaders. The battle of al-Karameh took place on 21 March 1968, in Jordanian village of al-Karameh where Arafat is based and where Fatah leaders gathered, between Israeli forces, a combination of Palestinian fighters (fedayeen) and forces from the Jordanian army. Israeli infantry soldiers and paratroopers, along with tanks, armored cars, and other vehicles, crossed in a pincer movement designed to attack the fedayeen. At dawn on March 21, the Israelis invaded. But quickly ran into trouble.. Israel suffered relatively heavy losses in the process and unexpectedly high number of casualties: 100-200 killed, 500 wounded, 27 tanks were destroyed, Arafat became popular all over the world, and the news of vastly outnumbered fedayeen standing and fighting instead of retreating led to a massive upsurge in publicity and support for the Palestinian resistance movement, and Fatah in particular, the battle thus became a key moment in the development of the Palestinian resistance movement.

November 13th 1974, marked a change for Arafat and the PLO when Arafat delivered a speech at the United Nations General Assembly.

He said that those who call us terrorists wish to prevent world public opinion from discovering the truth about us and from seeing the justice on our faces. They seek to bide the terrorism and tyranny of their acts, and our own posture of self-defense.

The difference between the revolutionary and the terrorist lies in the reason for which each fight. For whoever stands by a just cause and fights for the freedom and liberation of his land from the invaders, the settlers and the colonialists cannot possibly be called terrorist, otherwise the American people in their struggle for liberation from the British colonialists would have been terrorists; The European resistance against the Nazis would be terrorism, the struggle of the Asian, African and Latin American peoples would also be terrorism, and many of you who are in this Assembly hall were considered terrorists.

On December 13th 1988 Arafat delivered a speech in a press conference in Geneva, where he clarified the right of all parties concerned in the Middle East conflict to exist in peace and security, including the State of Palestine, Israel, and their neighbours.

In his speech he said “Let me highlight my views before you. Our desire for peace is a strategy and not an interim tactic. We are bent to peace come what may. Our statehood provides salvation to the Palestinians and peace to both Palestinians and Israelis. Self-determination means survival for the Palestinians. And our survival does not destroy the survival of the Israelis as their rulers claim.”

It was not easy for Yasser Arafat to convince his colleagues that the situation required flexibility and changes in the tools of struggle, especially since the PLO became responsible for the West Bank and Gaza Strip after Jordan’s decision to disengage from the West Bank.

After intensive efforts, Arafat was able to obtain the approval of the PLO leadership to change its strategy at the 19th session of the Palestinian National Council in Algeria, 15-12 November 1988, which adopted the Declaration of Independence, followed by Arafat himself. It was decided to form a provisional government for the State of Palestine. In April 1989, the Central Council elected Arafat as the first President of the State of Palestine.

The first President of the Palestinian Authority

In January 1996, elections were held for the Council and the Presidency of the Palestinian Authority, which was a real test of Palestinian democracy and gave the new authority an electoral legitimacy that it lacked.

Yasser Arafat was elected president and received 88.1% of the votes cast while Samiha Khalil, his rival, got 8.3%.