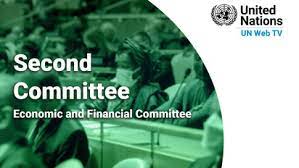 A United Nations official Monday warned that Israel’s consolidated control over the occupied territories hampers development and exacerbates the living conditions of people there.

A United Nations press statement said that Tarik Alami, Director of the Emerging and Conflict-Related Issues Division of the Economic and Social Commission for Western Asia (ESCWA), introduced the Secretary-General’s report on “Permanent sovereignty of the Palestinian people in the Occupied Palestinian Territory, including East Jerusalem, and of the Arab population in the occupied Syrian Golan over their natural resources” while noting that Israel continues to consolidate its control over the Occupied Palestinian Territory, hampering development and exacerbating living conditions, despite ongoing hardships due to the COVID‑19 crisis, as reported in a UN press statement.

Alami made his remarks in the virtual seventy sixth session of the United Nations General Assembly’s Second Committee (Economic and Financial).

He said that Israel’s “discriminatory policies and practices include zoning policies preventing construction, excessive use of force, arrest and arbitrary detention of thousands of Palestinians, and documented cases of torture.”

Noting that Israeli policies have disrupted livelihoods and continue to deprive Palestinians of access to their natural resources, he said that while Israeli colonial settlements have high-quality water, only 10 per cent have access to this vital resource in Gaza.  After three years of decline in gross domestic product (GDP), it fell to its lowest level in 2020, with 26 per cent unemployed and 1.4 million in Gaza suffering from food insecurity and malnutrition.

Meanwhile, Palestine’s observer to the UN, Riyad Masnour, said the report presents the cruel reality and continuing injustice that the Palestinian people have been enduring for more than 54 years of the illegal occupation.  The repeated military aggression has undermined all aspects of life for Gaza’s inhabitants, who are dealing with widespread food insecurity, collapse of essential services and a crippled health-care system.

Stressing that Israel’s occupation must end, he said urgent and decisive international action should include imposition of an arms embargo on the occupying Power; supporting the International Criminal Court in its examination of the situation; and prosecuting perpetrators of crime through travel bans and the imposition of diplomatic and economic sanctions until the occupying Power abides by the law.