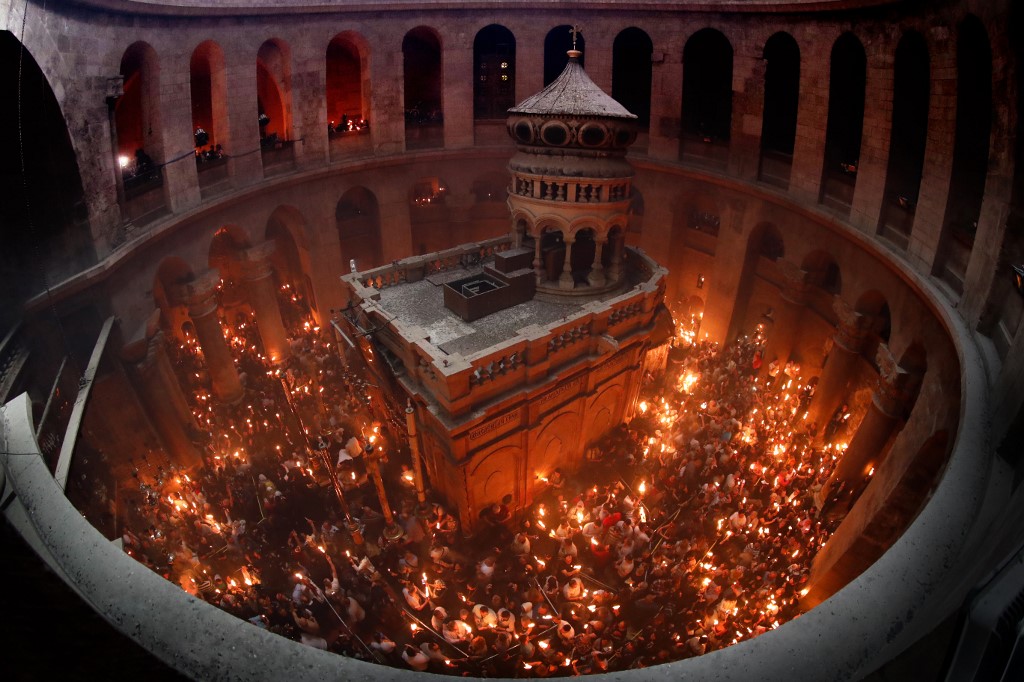 Christian Orthodox worshippers hold up candles lit from the Holy Fire as they gather in the Church of the Holy Sepulchre in Jerusalems Old City on April 27, 2019 during the Orthodox Easter. - The ceremony celebrated in the same way for eleven centuries, is marked by the appearance of "sacred fire" in the two cavities on either side of the Holy Sepulchre. (Photo by THOMAS COEX / AFP)

The Easter Holy Fire ceremony for the orthodox churches, their most important Easter event, was held today at the Church of the Holy Sepulcher in Jerusalem’s Old City without the usual thousands of people, but only by a handful of Greek Orthodox, Armenian, Assyrian, and Coptic priests.

Restrictions on gathering and travel ban in light of the global coronavirus disease, COVID-19, prevented people and pilgrims from all over the world from attending all of this year’s Easter celebrations, whether they were for the catholic or orthodox churches, held a week apart.

Last week, Good Friday annual procession that often attracts thousands of pilgrims from Palestine and around the world was also ed to few clergymen.

The Sepulcher Church, the site of the crucifixion and burial of Jesus Christ, as all worship places in Jerusalem and elsewhere, has been closed for the public for some time in an effort to prevent the spread of the deadly disease.

Greek Orthodox Patriarch Theophilos entered the tomb of Christ chapel shortly after midday today where he held prayers in anticipation of the appearance of the holy fire.

He came out minutes later carrying out the holy fire on candlesticks as priests and few people waited outside the church to light their candles from the holy fire in order to take it to their congregations at different cities in Palestine and around the world.

The fire will also be taken to people’s homes in all Christian Palestinian cities, towns and villages instead of them coming out to get it from their churches as a result of the restrictions. The holy fire parades were also cancelled.