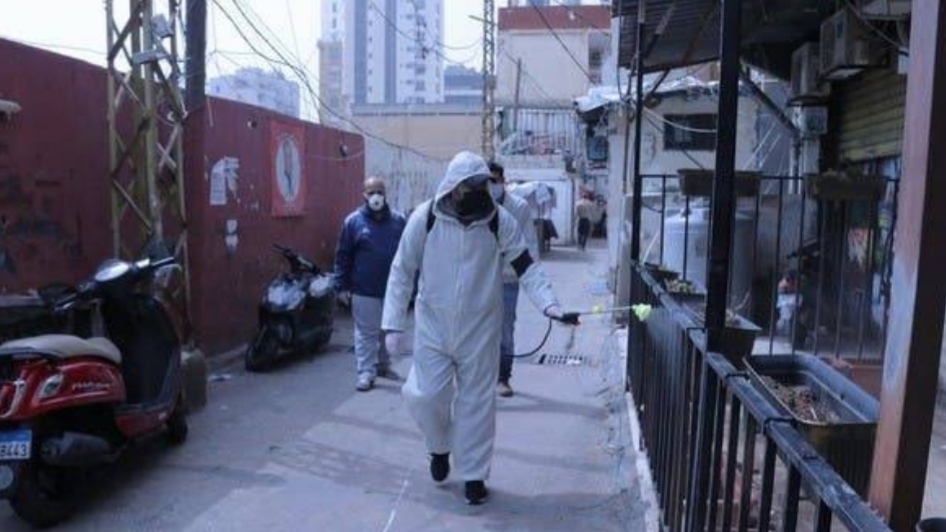 Palestinian refugees in Lebanon pool resources to fight the virus

At the entrance to Mar Elias, a Palestinian camp in southwest Beirut, a young woman with gloves and a surgical mask points an infrared thermometer at an approaching resident’s forehead, while another volunteer sprays his bag with disinfectant.

Others were preparing to distribute dozens of bags filled with bleach, soap, and alcohol spray to residents of the camp, while a pair of young men began to hose down the walkway with disinfectant.

With more than 330 confirmed cases of coronavirus in Lebanon and the numbers increasing daily, residents of the country’s smallest Palestinian camp – a collection of some 1,700 Palestinians, Syrians, Lebanese and others – have taken an unusually coordinated approach to preventing its arrival in their community.

“From the first day we heard that corona had begun to spread in Lebanon, we took these proactive measures to protect ourselves so that there won’t be an outbreak of the epidemic in the camp,” Fares Lotfi, a member of the emergency committee formed by the camp’s residents to fight the spread of the coronavirus, told Al Arabiya English.

“If there were a spread of corona in the camps, it would be a disaster, because you know in the camp there is overcrowding,” he said. “… One case might infect half the camp or three fourths of it, if not the whole camp.”

Volunteers stand guard at the entrances 24 hours a day and break up groups of residents who gather in the camp’s narrow streets. While some supplies were contributed by NGOs, Lotfi said the majority of the measures were funded by residents of the camp pooling their resources – despite the fact that as a result of the lockdown and the preexisting economic crisis in the country, many of them are now out of work.

One of the volunteers, Wafaa, a 12th grade student currently out of school due to the coronavirus shutdown, likened the virus to a hidden enemy waiting to ambush the community.

“This virus is like a war, but if there’s a war, you know where there’s bombing, where the bomb might come down,” she said. “But this, you don’t know where the virus will spread. So, we have to take steps to protect our camp.”

To date, there have been no confirmed cases in Mar Elias, nor in any of the Palestinian camps in Lebanon. United Nations Relief and Works Agency for Palestine Refugees in the Near East (UNRWA) officials hve confirmed that one Palestinian man had tested positive for the virus, but said he was not living in a camp. The patient, from the town of Barja, did not require hospitalization and is being treated at home, said UNRWA spokeswoman Hoda Samra.

“Thank God until now we haven’t had any cases. If we had one, where can they go?” said Salam Al Zammar, a member of the camp’s civil defense team who is also volunteering with the coronavirus response team. “There’s no plan.”

UNRWA provides a link between Palestinian patients and hospitals but does not provide testing for the virus itself and is not set up to treat coronavirus patients in its health facilities.

“UNRWA centers are only primary healthcare centers with no capacity to treat patients,” Samra said. Patients with potential coronavirus symptoms are referred to Rafic Hariri University Hospital, the government hospital that has been treating the majority of the virus cases.

However, she added that UNRWA was currently working on establishing locations outside of camps where “suspected cases” could voluntarily isolate, rather than stay in overcrowded shelters within the camp.

Ali Derawi, a Mar Elias resident who owns a butcher shop on the edge of the camp, said the camp residents, coming from diverse communities, have a responsibility to take care of each other.

While historically a Palestinian camp with a predominantly Christian population, today a little less than half of the residents are Palestinian, either from Lebanon or Syria, while 40 percent are Syrian. The camp also hosts Lebanese families and African migrant workers drawn by the camp’s relatively cheap rent.

“The Palestinians from Lebanon and Palestinians from Syria are one people, with the same concerns, and our Syrian brothers who are living with us and other nationalities living with us, as well, we all have the same problem,” Derawi said. “We have pluralism in the camp, and we’re all living together. And if harm arrives, it will arrive for all of us.” — Al Arabiya English