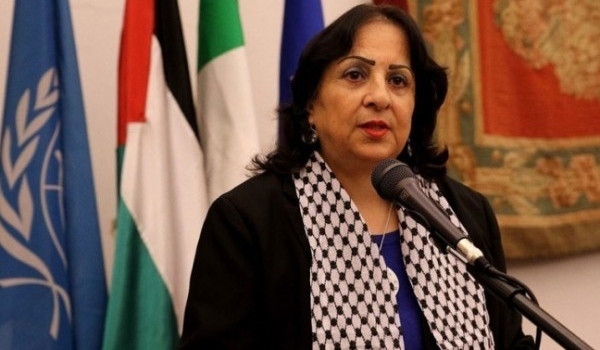 Minister of Health, Mai al-Kaila, vehemently criticized and rejected the establishment of a US field military hospital in the northern Gaza Strip under the sponsorship of Hamas and the Israeli occupation.

Speaking to the Voice of Palestine radio, al-Kaila said that the ministry knows nothing about this hospital except for what was circulated through media; that it is a field military hospital that used to operate in Syria and is now being moved to the northern Gaza Strip despite the opposition of all national factions, which consider the existence of this hospital to be a suspicious move that carry political intentions rather than therapeutic goals.

“We reject the establishment of this hospital, which falls within the framework of the “deal of the century,” said the minister.

She stressed that the ministry does not know who will run the hospital, which she slammed as an advanced US-Israeli military fortress inside the Gaza Strip. “The media blackout about the construction of this hospital raises many big questions about its real goals.”

She said that nothing justifies the establishment of the military field hospital, especially that all the population of the Gaza Strip enjoy a free health insurance entitling them to all of the Ministry’s services, including referrals to hospitals in the West Bank, Jerusalem and Egypt.

“Every year, the Ministry [of Health] sends medications and medical supplies worth 60 million shekels to the Gaza Strip. Therefore, there is no need for this US military hospital, where US military and not doctors will be working,” al-Kaila added.

She said that if America wants to support the health sector in the Gaza Strip, it must support hospitals there, resume funding it had cut to hospitals in Jerusalem, and end the Israeli war on the Strip.

“If America wants to help our people in the Gaza Strip, it should have supported UNRWA, rather than cutting aid to this international institution. There is a big question mark about this hospital, which is in line with the “deal of the century.”

Al-Kaila called upon the Palestinian factions and people in the Gaza Strip to unite efforts to thwart the construction of this military field hospital, stressing that the ministry will not leave the health of its people in Gaza in any hands.