BREAKING NEWS
Home News President Abbas at SDG summit: We need to uphold the right to self-determination for peoples 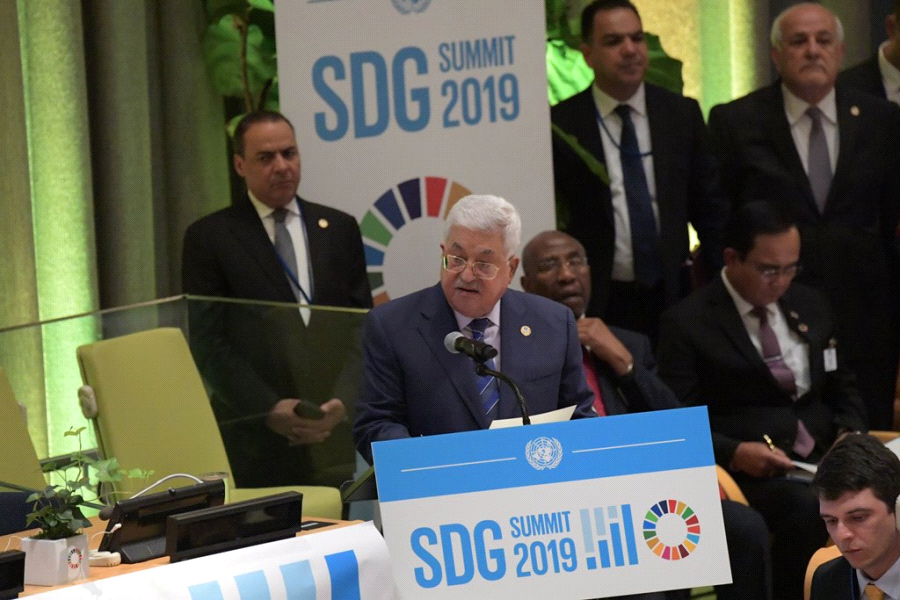 President Abbas at SDG summit: We need to uphold the right to self-determination for peoples

President Mahmoud Abbas yesterday called for upholding the right of people under colonial rule and foreign occupation to self-determination.

Speaking on behalf of the Group of 77 and China at the two-day Sustainable Development Goals (SDG) Summit, which opened yesterday in New York, Abbas stressed the need to search for a more just and equitable international economic order and opportunities to raise the standard of living of people in the less developed countries.

“Our Summit today and our Joint Declaration, in which we reaffirm the principles of the 2030 Agenda for Sustainable Development, and through which we develop concrete actions for its further implementation, demonstrate that the 2030 Agenda for Sustainable Development remains our common goal, which we all aspire to achieve over the next decade and remains our first line of defense to face the challenges that threaten the existence of humanity, which requires all of us to implement this plan in an integrated and fair manner,” Abbas told the summit.

“Despite the remarkable efforts of all, and despite the progress we have made in many areas, we are still slowly moving towards some of the key and indispensable goals to build a better future for all countries and peoples, including the eradication of poverty in all its forms and dimensions, which is the main goal of the 2030 Agenda for Sustainable Development,” he added.

President Abbas said that there was a need to make sure no one is left behind and to make sure that all nations and peoples and all segments of society, including the poorest and most vulnerable, reach the goals and objectives of the sustainable development agenda, stressing the search for “a more just and equitable international economic order that would provide opportunities to raise the standard of living of our peoples.”

He added: “We reaffirm the need to uphold the right of self-determination for peoples under colonialism and foreign occupation, and to respect the territorial integrity and political independence of States, in accordance with the 2030 Agenda for Sustainable Development, international law and the Charter of the United Nations.

“We also reaffirm our unequivocal rejection of the imposition of unilateral economic measures as a means of economic bullying against developing countries, and we call on the international community to adopt urgent and effective measures to ensure their immediate elimination.”

Abbas also called for taking urgent steps to address the effects of climate change on developing countries, especially the poorest and most vulnerable ones.

“Let us not deprive our future generations of their homeland, which will allow them to continue their human history for centuries to come,” he said.

“We have barely a decade in which to fulfill our vision set out in the 2030 Agenda for Sustainable Development. We all know that human existence and the fate of our planet, and the fate of life on it, depends on our ability to meet our commitments.”

Opening the SDG summit, United Nations Secretary General Antonio Guterres warned that much more needs to be done, and “we must step up our efforts. Now”.

He reiterated some of the many aims from the Agenda – such as an end to extreme poverty and hunger, a low carbon economy, peaceful and just societies, and human rights for all.

However, he warned that the world is, so far, set to miss the deadline, citing deadly conflicts, the climate crisis, gender-based violence, and persistent inequality: “half the wealth around the world is held by people who could fit around a conference table”, Guterres told the delegates, “and, at the current pace, almost 500 million people could remain in extreme poverty by 2030”.

Indicating the direction that discussions will follow over the two days, the UN chief called for global action in areas such as conflict prevention, development finance, and the climate crisis; local action to make a difference in people’s lives; and building up partnerships that include civil society, media, the private sector, academia and others.