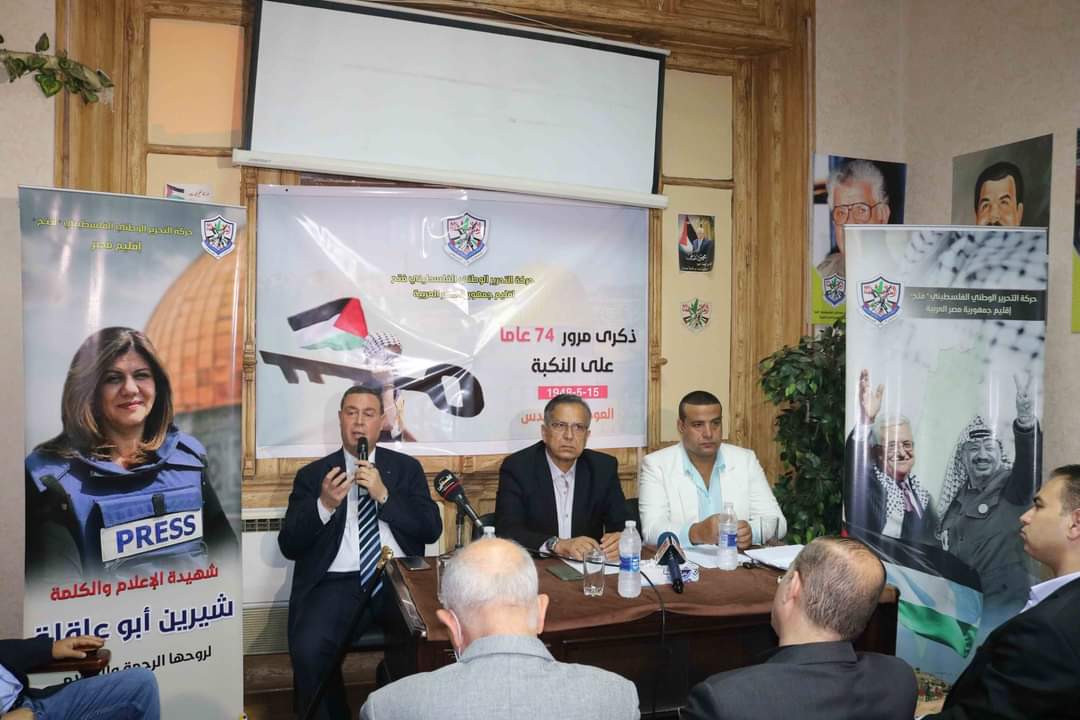 Fatah in Egypt Marks 74th anniversary of the Palestinian Nakba

Today, Saturday, the Palestinian National Liberation Movement “Fatah” in Egypt organized a symposium to mark the 74th anniversary of the Nakba, in the presence of members of the region’s committee, cadres of the movement, the Fatah women’s cadre, and a number of members of the Palestinian community and institutions in Egypt, at the movement’s headquarters in Cairo, and in the presence of  the ambassador Diab Al-Louh, Ambassador to Egypt and its permanent representative to the League of Arab States, and Dr. Hatem El-Gohari, expert on Israeli affairs.

The meeting was opened by  speech by Dr. Muhammad Ghareeb, Secretary- General of Fatah Movement in Egypt, said: “We meet today to mark the 74th anniversary of one of the stigmata in the forehead of humanity, not only because it is the catastrophe of a people, but for 74 years without the return of the right to its owners and in a world of double standards, stressing that our people He continues his struggle against the occupation and his adherence to the liberation of his land, sacrificing thousands of martyrs, t the last of them will not be the martyr of the media and the word, the daughter of occupied Jerusalem, Sherine Abu Akleh.

For his part, Ambassador al-Louh pointed out that despite the challenges facing the Palestinian people, no matter how many years of diaspora, that the steadfastness of the Palestinian people and their great leadership, our people must obtain their rights, foremost among which is the right to return to their villages and cities in historic Palestine. One Palestinian united under the leadership of President Mahmoud Abbas (Abu Mazen), and that what is happening in Palestine, Jerusalem, and the West Bank today is a struggle between a people under the occupation authorities and the occupying power. Therefore, we affirm our right and adherence to our Palestinian land, and our legitimate rights, speaking of the transparency and clarity of the Palestinian discourse. The day that attracts every day more sympathizers and supporters of our Palestinian rights and exposes Israel’s racist practices to the world.

The seminar was concluded by Dr. Ghareeb, recalling how the Palestinian culture and concepts changed after the Nakba, so that everything related to the hope of returning to the land of Palestine, from revolution and resistance, and the keys to the houses that their owners carried with them to embody hope and even the inevitability of return.

The symposium included the screening of a short film on the Palestinian Nakba. 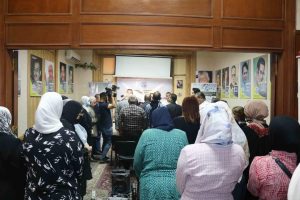 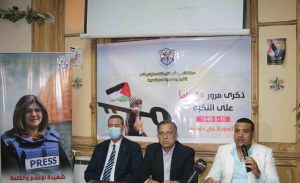