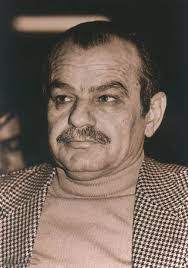 This month marks the 39th anniversary for the martyrdom of the “Marshal of Beirut”, Saad Sayel “Abu Al-Walid”, who is considered one of the most prominent Palestinian soldiers and militants in the history of the contemporary Palestinian revolution.
Saad Sayel was born in the village of Kafr Qaleel, south of Nablus in 1932.
He studied at Nablus schools and obtained a high school diploma in 1950. Then he joined the Jordanian Military College in 1951, where he specialized in military engineering.
He joined many high-level and advanced military courses held in Britain, Egypt, the United States, Iraq, the Soviet Union, and many socialist countries, related to multiple aspects, including: air defense, bridge design and classification.
He continued his work in the Jordanian army following Israel’s occupation of the West Bank in 1967, and he had a role in the Battle of Karama that took place on March 12, 1968, where joint coordination was conducted between Mamdouh Saidam “Abu Sabri” and Jordanian army officers, led by Saad Sayel “Abu Al-Walid”.
Saad Sayel graduated in his military ranks, where he was assigned the leadership of the Hussein bin Ali Brigade, a colonel, and then moved to Lebanon, to join the ranks of the Palestinian revolution in 1971.
He had a prominent and important role, given his military experience in rebuilding the military apparatus of the Palestinian revolution And training the forces, along with Yasser Arafat, Khalil Al-Wazir “Abu Jihad”, Muhammad Youssef Al-Najjar, and others.
He was appointed director of the Central Operations Authority of the Palestinian Revolutionary Forces, a member of the General Command of the Asifa Forces, and a member of the leadership of the Occupied Territories Authority after he was promoted to brigadier general. The conference was held in Damascus in 1980.
The martyr Saad Sayel presided over the negotiations that were taking place after the Israeli occupation army’s siege of Beirut. Negotiations were taking place with an American delegation, headed by the diplomat Philip Habib of Lebanese origin, in an apartment building in Beirut, and at the home of the then Lebanese Prime Minister Shafiq Al-Wazen.
After the PLO fighters withdrew from Beirut in 1982 following an agreement, Khalil al-Wazir (Abu Jihad), Salah Khalaf (Abu Iyad), Hayel Abdel Hamid (Abu al-Hol), and Saad Sayel headed to Syria in order to plan the assembly of the Palestinian forces withdrawing from Beirut.
Abu al-Walid was focused on the Palestinian forces returning to the Lebanese Bekaa region so that they can be reconstituted properly, and that they begin their military action against the Israeli occupation, and his idea was to direct sudden operations against the occupation forces present in the western Bekaa, or bombing operations with missile weapons.
Among the most prominent operations that Abu al-Walid supervised was the capture of eight Israeli soldiers, which enabled the Palestinian revolution to liberate the prisoners of Ansar camp.
On Monday, September 27, 1982, the first day of Eid al-Adha, gunmen opened fire on the convoy of “Abu al-Walid”, which included three vehicles, and the driver in the first vehicle was martyred. He he was taken by ambulance to the Mowasat hospital in Damascus.
Abu Al-Waleed was martyred at exactly eleven o’clock in the evening in Al-Mowasat Hospital in Damascus, after his heart stopped due to the heavy bleeding he suffered from. At the next day, his body was carried on the shoulder of his comrades in Damascus and buried in the al-Shohada tomb of the Yarmouk Palestinian Refugee camp.