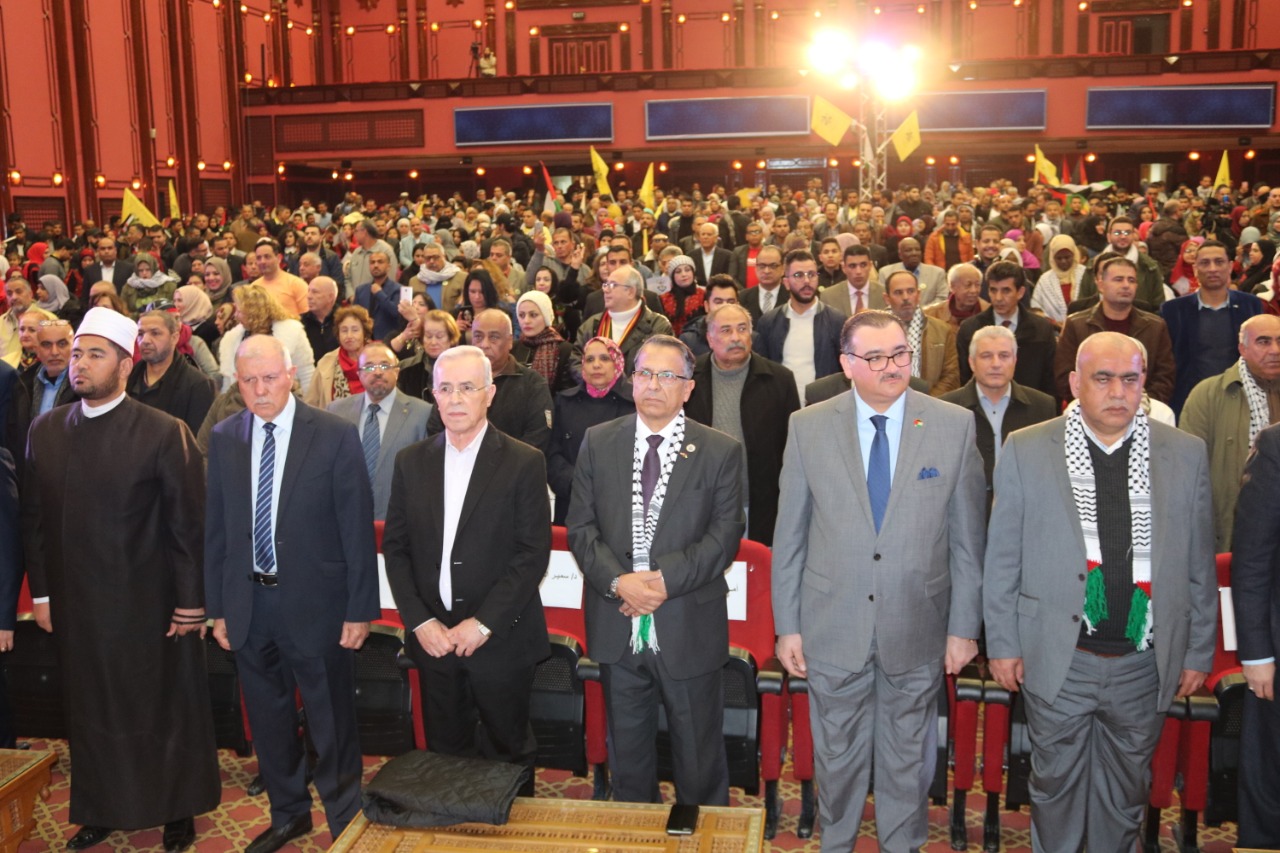 The Palestinian National Liberation Movement “Fatah” in Egypt, on Friday evening, marked the 55th anniversary of the lunching of “Fatah” movement and the Palestinian revolution, at the Al-Azhar Convention Center in Cairo.

The event started with the Egyptian and Palestinian national anthems, then verses from Surat Al Fateh, Then reading Al-Fatihah on the souls of martyrs in Palestine and the Arab and Islamic worlds, then a documentary film about the start of the Palestinian revolution on 1/1/1965.

In his speech,  the Secretary General of Fatah movement in Egypt Dr. Mohamed Ghareeb he said, we meet today to celebrate the beginning of the embodiment of the idea, the beginning of the journey, the sacrifice and the redemption, and the writing of the highest meanings of giving. Affirming that Fatah has become a national project rooted in the soil of the land of Holy Prophets and the land of peace.

He pointed out that Fatah is the revolution that embraced people who gave birth to it from the womb of suffering, injustice and displacement to pay the price of freedom and return and the restoration of rights from the blood of their children, the suffering of their families, women and children, and the sacrifice of their youth and their elders, stressing that Fatah is still resisting and facing the occupation in the civilized world.

He called on the world to work with all force to end this aggressive settlement occupation to bring peace to the land of peace and love, pointing out that Fatah is the guarantee of achieving the national project in an independent country.

And praised Egypt’s role in embracing the idea, preserving the identity, and supporting the march of the revolution, stressing that it is still rising through construction and work to support the Palestinian cause led by its leader, President Abdel Fattah El-Sisi.

Then Brother / Nagy Al-Nagy said in his speech on behalf of the Ambassador of the State of Palestine in Egypt, Ambassador / Diab Al-Louh: “This historical event, which was described by the late Egyptian President Gamal Abdel Nasser, that Fatah movement was found to remain”, noting that this giant movement and the national liberation project despite All the challenges it faces, will remain on the path of leadership and its project led by President Mahmoud Abbas, the sole and legitimate representative of the Palestinian people until Jerusalem is the capital of Palestine.

In turn, the Director of the Palestine Administration at the Arab League, Dr. Haider al-Jabouri, condemned the Israeli aggression waged by the occupation against the Palestinian people, pointing to the Palestinian issue, which will remain the main factor that determines the fate of the entire nation and is the key to peace and the safety of the nation.

While the representative of Al-Azhar , Sheikh Hassan Khalil, in his speech on behalf of the Sheikh of Al-Azhar Dr Ahmed Al Tayeb, He strongly condemned the Zionist occupation forces storming the blessed Al-Aqsa Mosque, and assaulting worshipers in it, stressing that these flagrant attacks are a flagrant violation of the sanctity of God’s homes, and a violation of covenants International, and in continuation of the brutal repressive measures against Jerusalem and its people and sanctities, which provokes the feelings of Muslims around the world.

In his speech on behalf of President Mahmoud Abbas, a member of the Central Committee of the “Fatah” movement, Dr. Samir Al-Rifai said: “On this day, we must mention the leader of the march, the martyr symbol Yasser Arafat, the martyrs of Palestine from the Central Committee, and the leader Mahmoud Abbas who made the start that transformed our people from  refugees into people fighting for their freedom and their cause.

He stressed that the start of the Palestinian revolution reshaped the map of Palestine in the region, and the world politically and geographically after the occupation tried to erase it, and put it in the circle of oblivion, pointing out that Gaza was and will remain the source of the revolutionaries and that there is no state in Gaza or a state without Gaza. 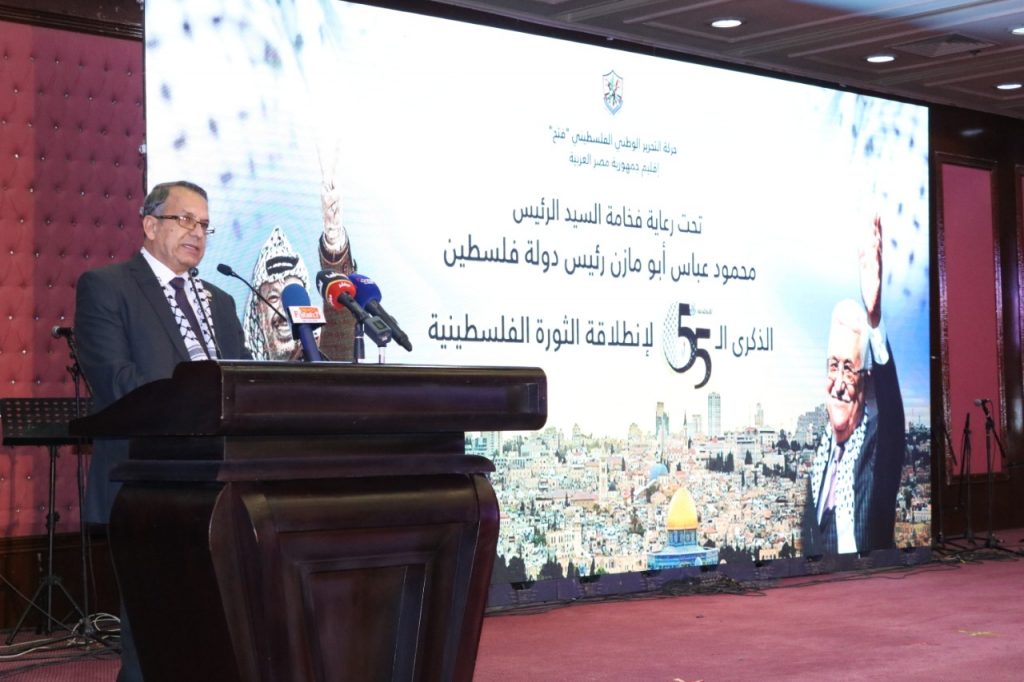 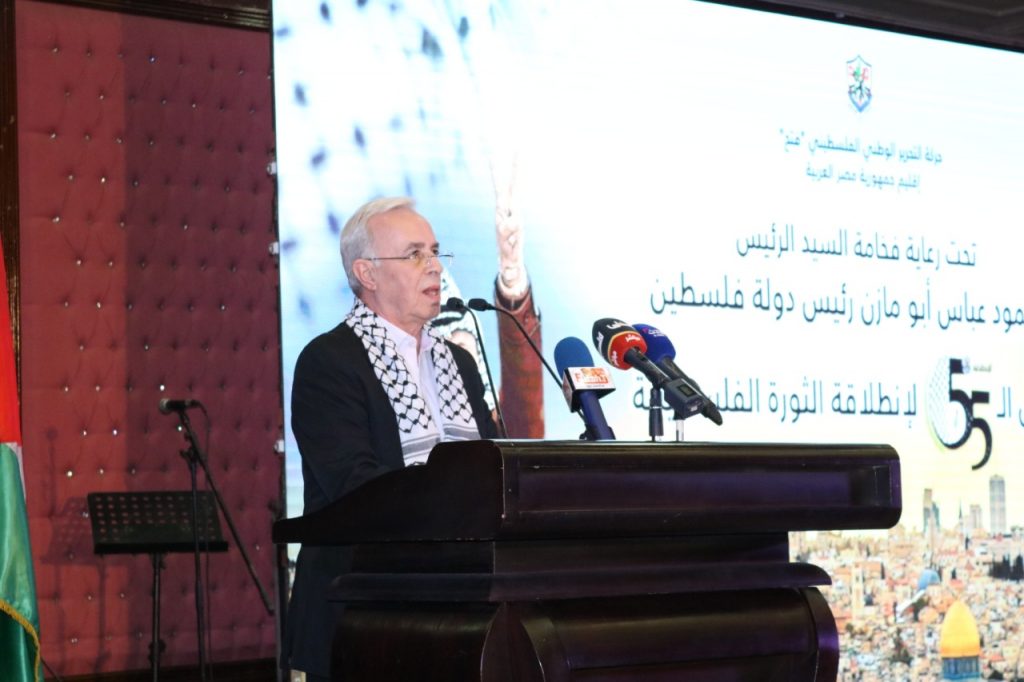 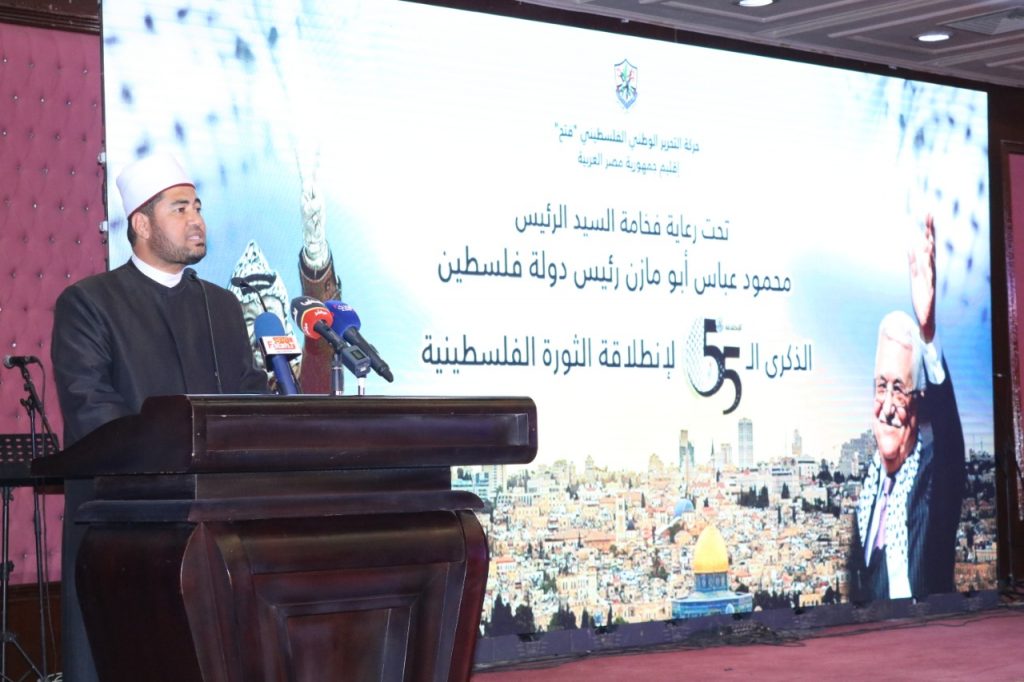 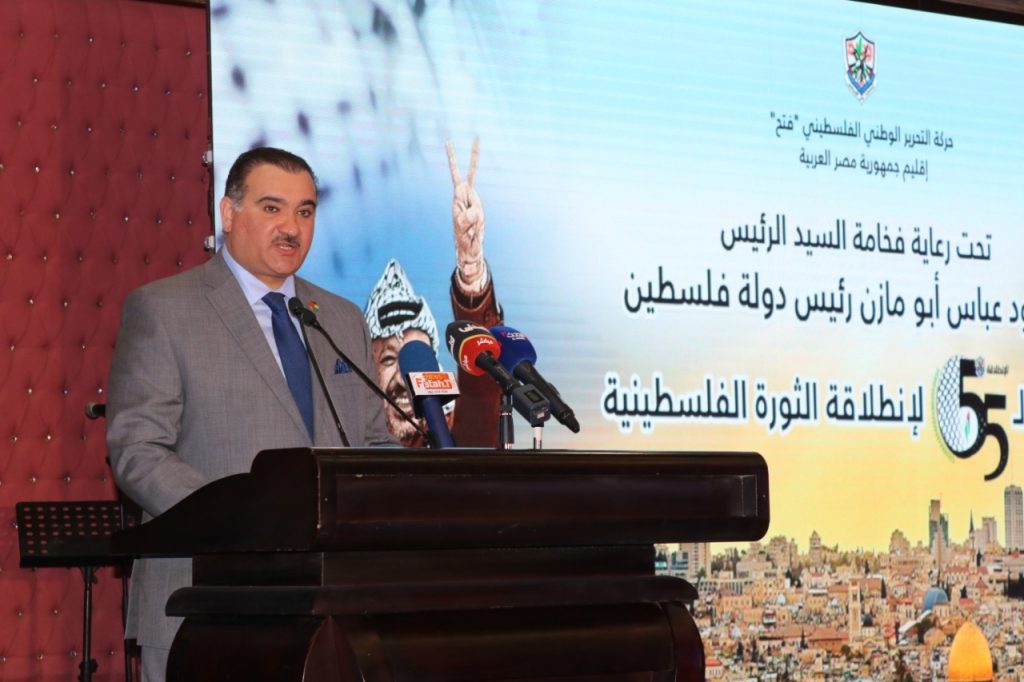 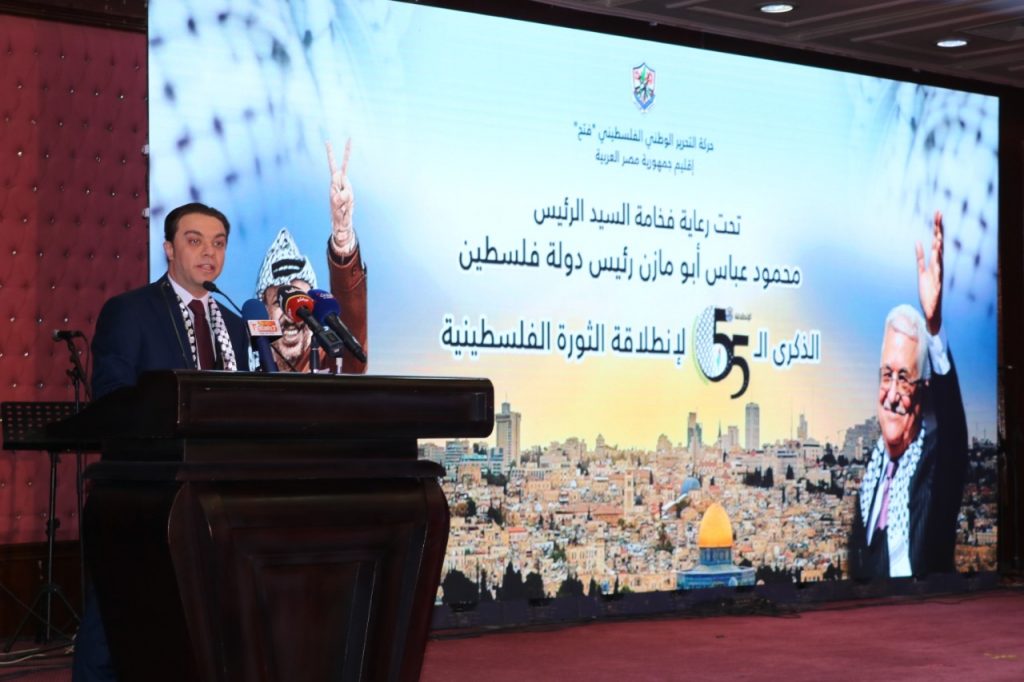 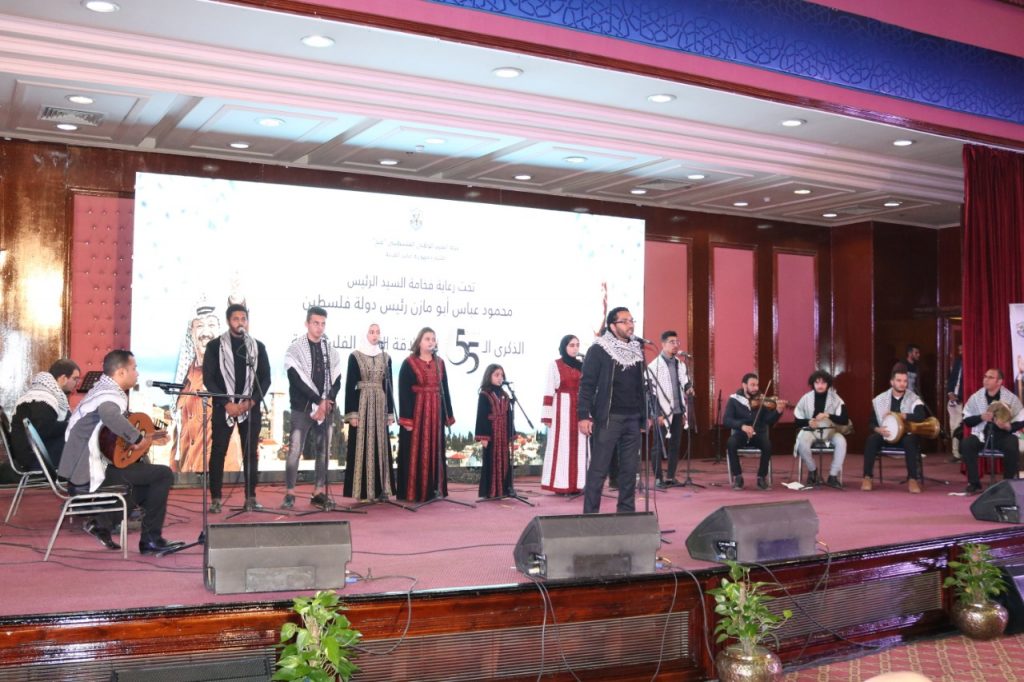 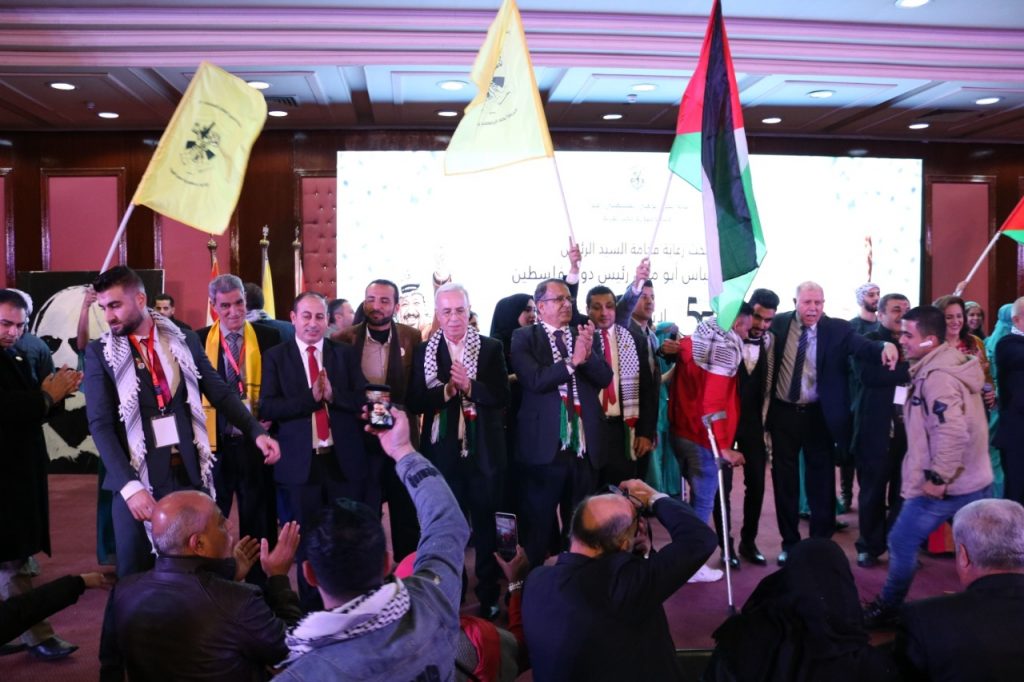 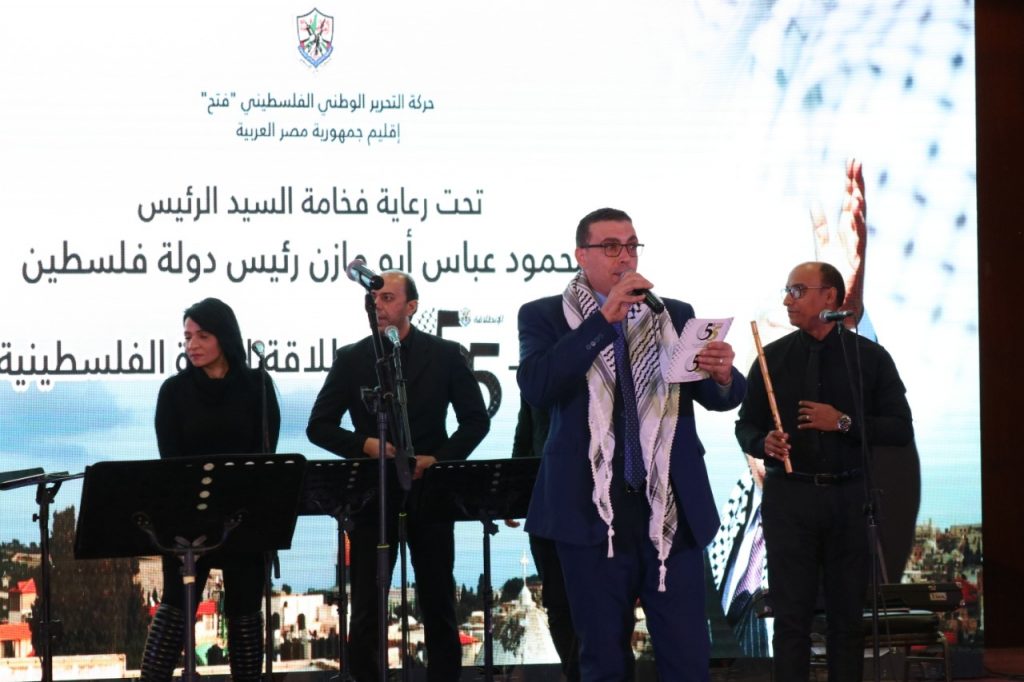 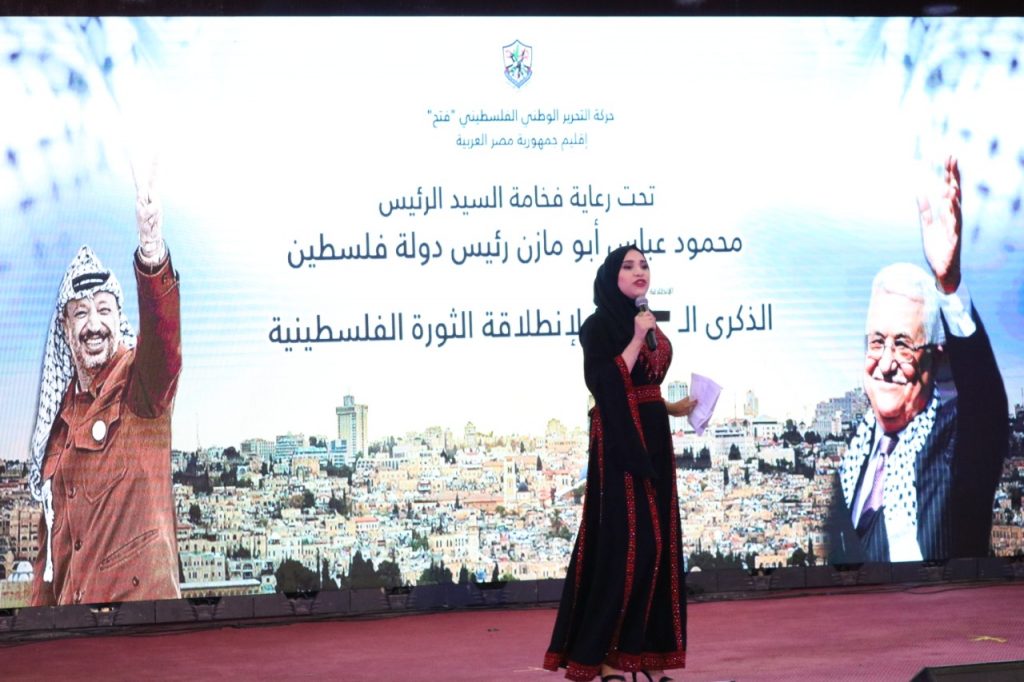 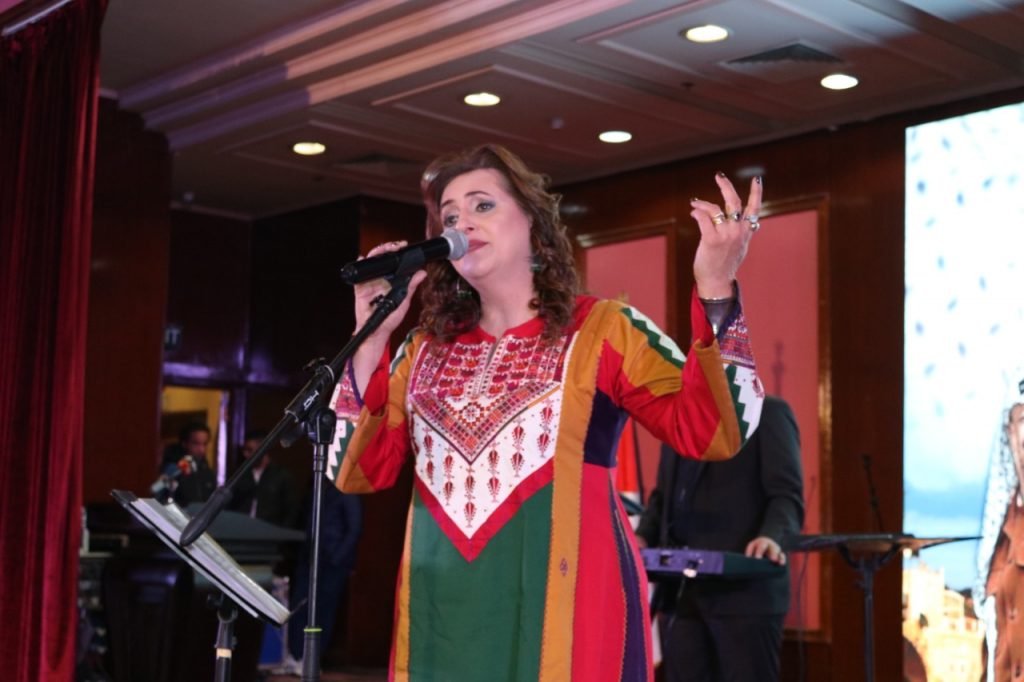 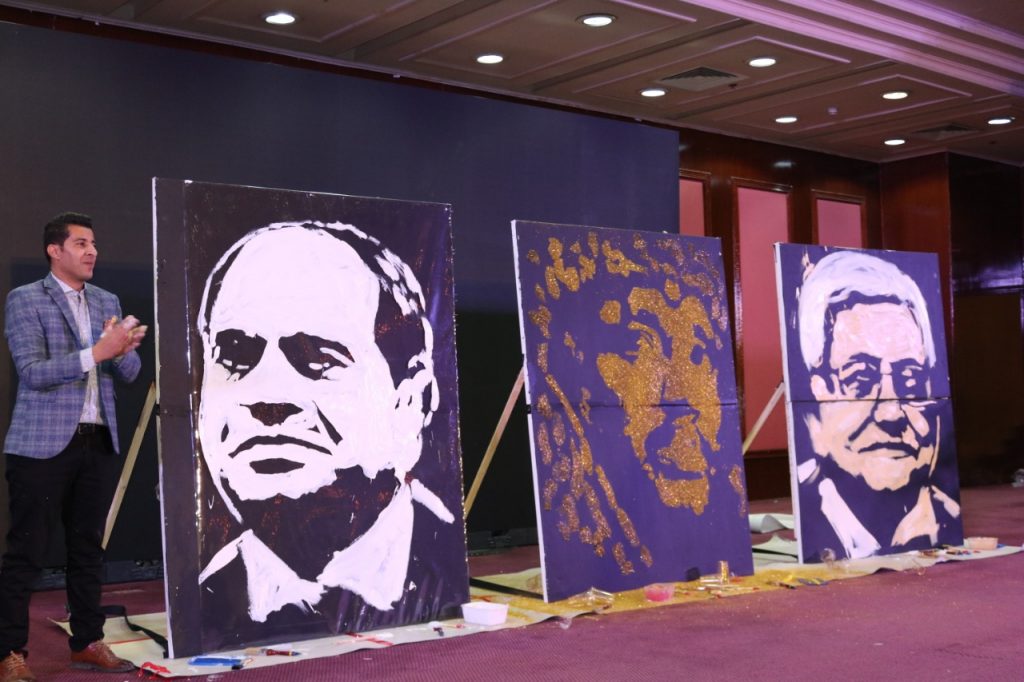 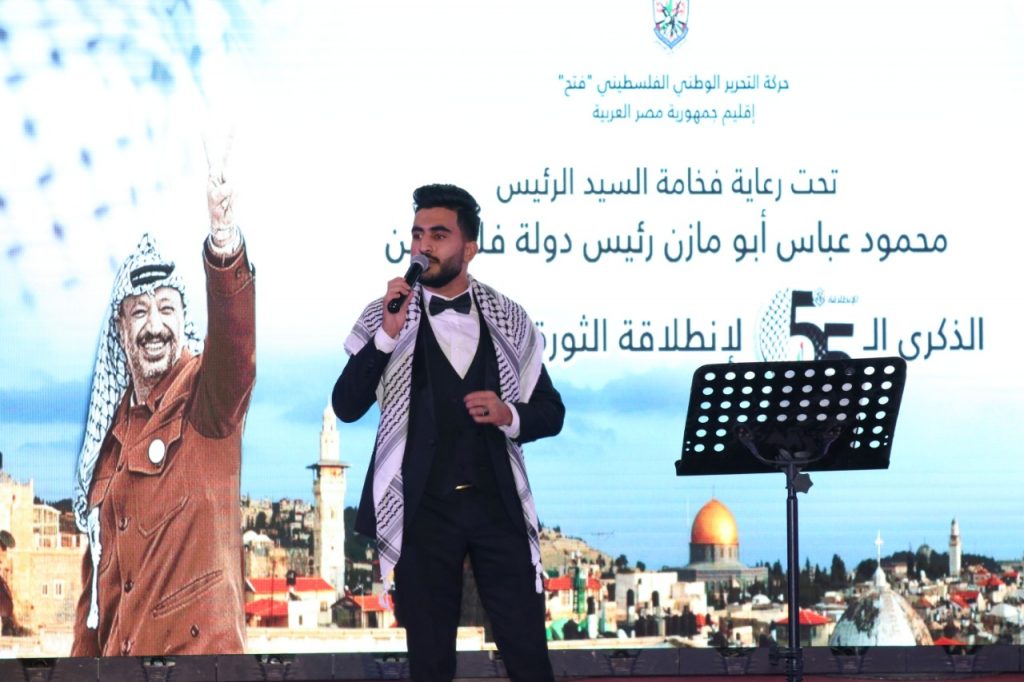 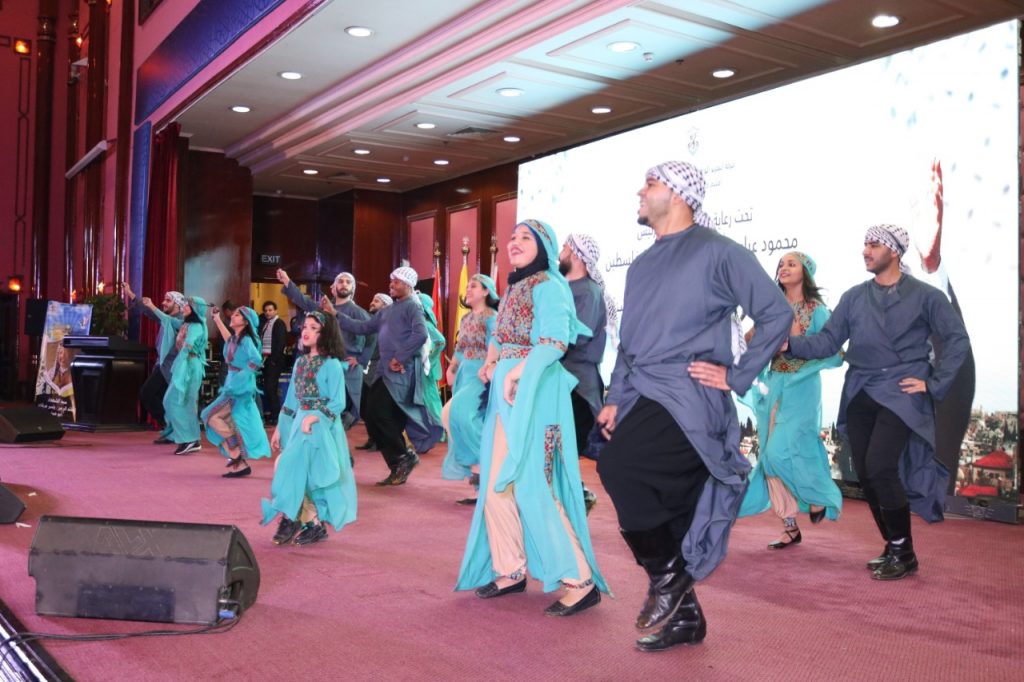 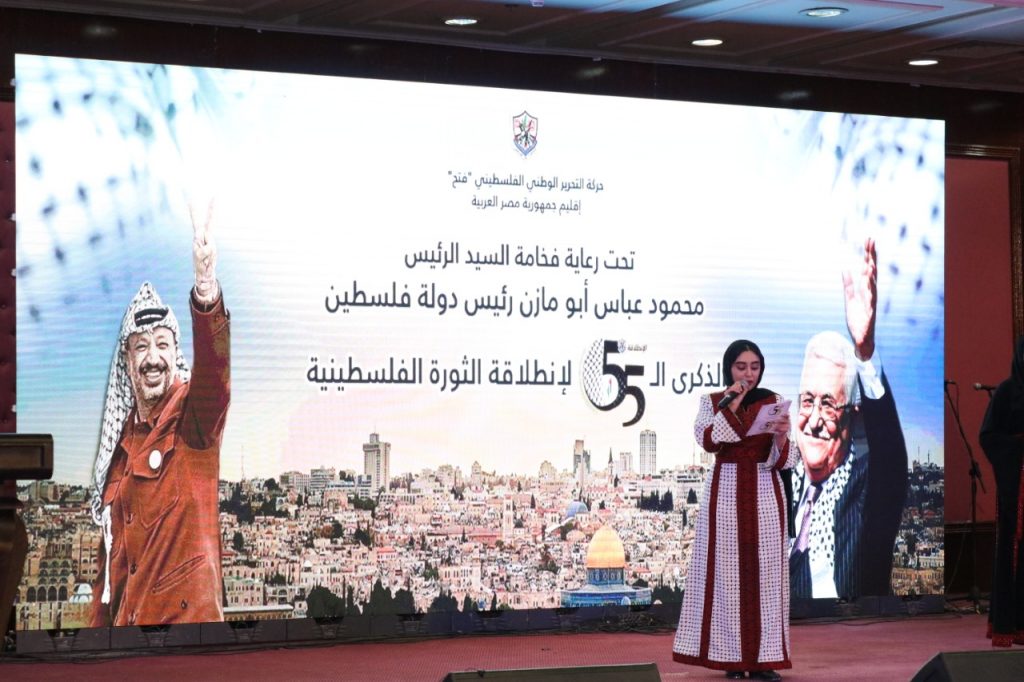 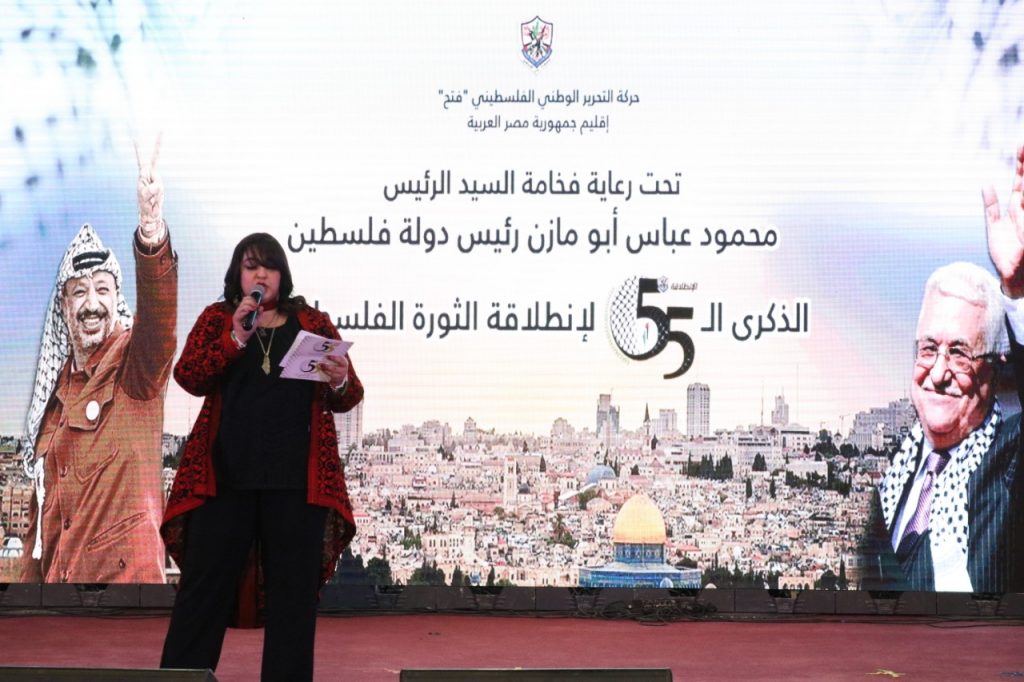 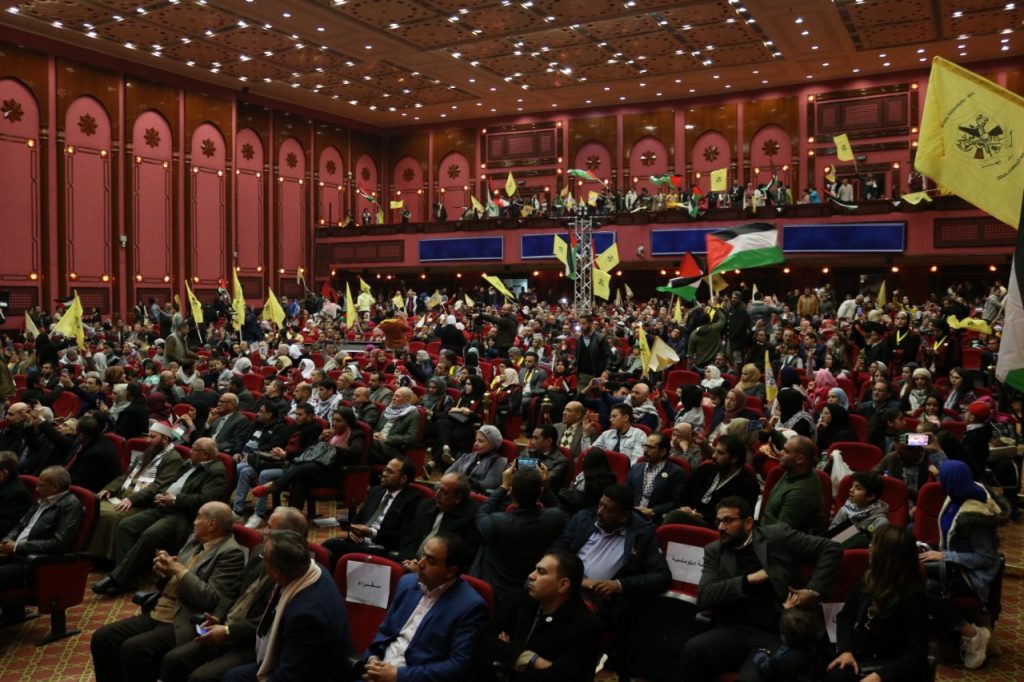 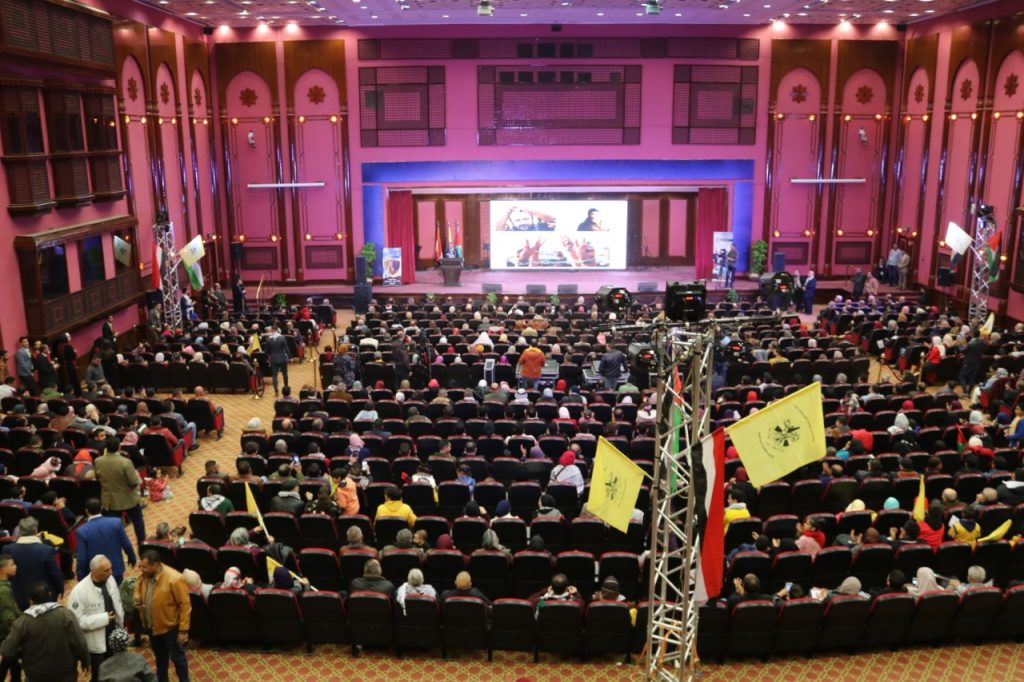