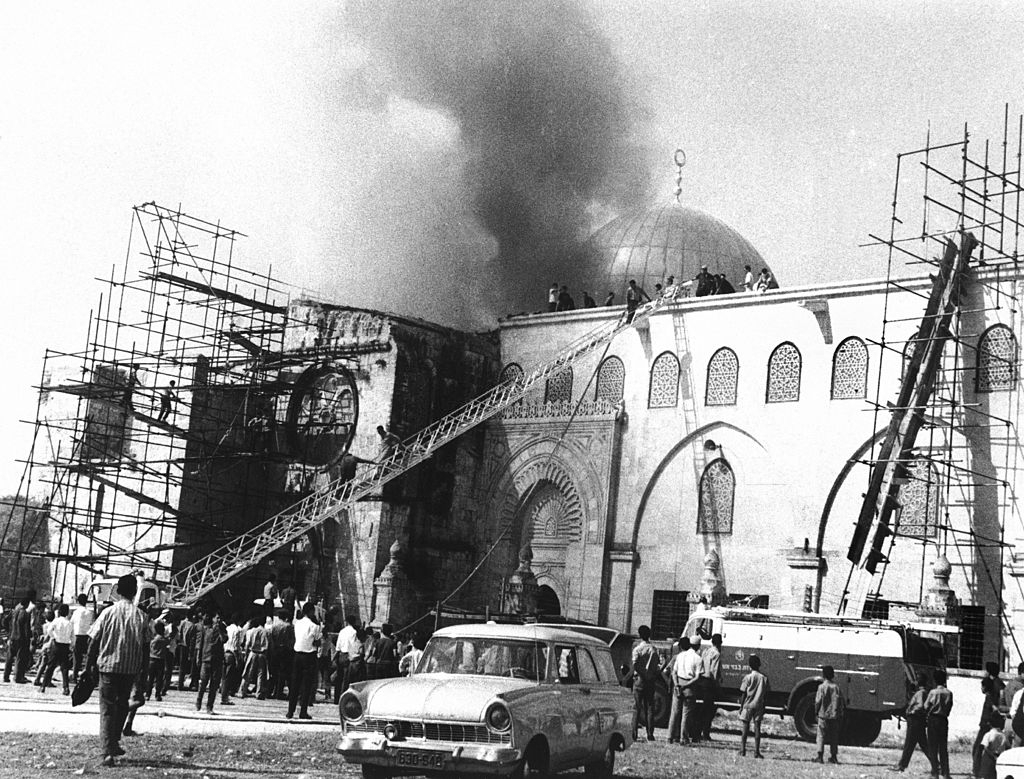 The Arson Attack on Al-Aqsa Mosque

On 21 August, 1969, it was early on Thursday morning when the alarm was sounded. Palestinian guards in the Aqsa compound saw smoke rising from the south-east wing of the mosque and, upon closer inspection, saw a blaze inside the prayer hall.

Muslims and Christians alike rushed to the mosque to quell the flames, but Israeli occupation forces prevented their entry. After short but fierce clashes, they made their way into the Noble Sanctuary and started to tackle the fire. After the fire extinguishers failed to work, they looked for sources of water but found the pumps broken and the hoses cut. They banded together quickly to form a human chain and used buckets and other small containers to bring water to the building. As the smoke cleared, the extent of the damage was made known. The fire had swept through some of the oldest parts of the mosque, most notably destroying the 900-year-old wood and ivory pulpit gifted by Salahuddin Al Ayubi, as well as mosaic panels on the walls and ceilings; many areas within the mosque were left blackened and burnt. As the news of the inferno spread, heated demonstrations took place throughout the city. In reaction, all access points to the mosque were blocked by Israeli security forces, such that Friday prayers the next day were not held in the compound for the first time. A suspect was soon identified; Dennis Michael Rohan, an Australian Christian tourist, who was arrested on 23 August. Rohan was unafraid of revealing his motives for the crime; as “the Lord’s emissary”, he wanted to hasten the second coming of Jesus Christ which, in his view, could only be achieved by allowing the Jews to build a temple in place of Al-Aqsa Mosque, where it is claimed that the Temple of Solomon originally stood.

The UN responded by condemning the attack and called on Israel to void all arrangements that would alter the status of Jerusalem. Israel ignored this resolution, as it has done with all such calls before and after.The suspicions that Israel was actively involved in planning and facilitating the arson attempt have never been disproved. Many also see the normalization of Zionist intimidation, including Israel’s attempts to eradicate Palestinian heritage in the region, as the ultimate source of the mentality that led to this attack, and all others since.