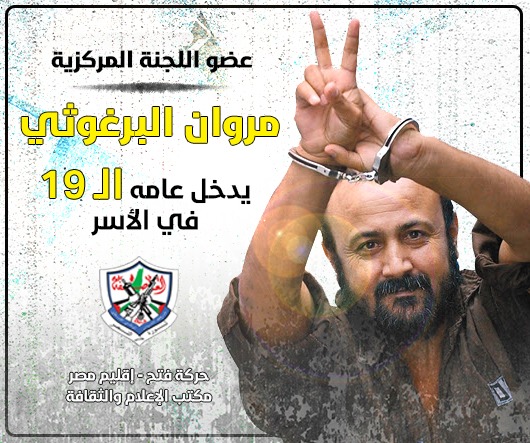 atah leader and member of its Central Committee, Marwan Barghouti, completed yesterday 18 years in Israeli jails for his resistance of the Israeli occupation, according to the Palestinian Prisoner Society (PPS).

Barghouti, 60, from Kobar village near Ramallah, was arrested on April 15, 2002 for his role in the second Palestinian intifada, or uprising, and sentenced to five life terms plus 40 years.

He had previously served time in Israeli jails since age 15 for his resistance and was expelled into exile in 1986 before returning home in April 1994 following the signing of the Oslo accords between the Palestine Liberation Organization (PLO) and Israel that allowed the return home of thousands of PLO leaders, including the late Yasser Arafat.

Barghouti was member of the Palestinian parliament at the time of his arrest and was regularly considered the most popular Palestinian leader according to public opinion polls.

Barghouti’s assistance, Ahmad Barghouti, was also arrested with him in 2002 and has also completed 18 years in Israeli jails. He was sentenced to 13 life terms plus 50 years, said the PPS, also for his role in the second intifada.