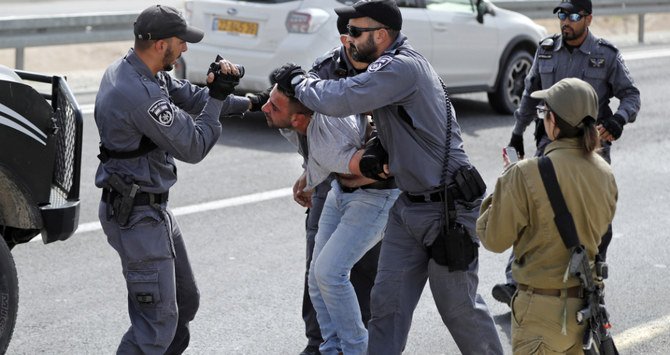 International human rights groups have joined forces to demand that Israeli authorities release older and sick prisoners to avoid the spread of the coronavirus disease (COVID-19) in the country’s jails.

The appeal coincided with Palestinian Prisoners Day on April 17 when Palestinians remember friends and family being held in Israeli prisons.

Yehiya Masswadeh, spokesman for the International Committee of the Red Cross (ICRC), told Arab News that committee members were concerned about the dangers posed by COVID-19 to detained Palestinians, especially those with serious medical conditions.

“The conditions of prisoners are the top subject in our dialogue with the Israeli authorities,” he said.

Last month, the Palestinian Human Rights Organizations Council (PHROC) sent letters to the ICRC and the diplomatic community in Palestine highlighting the rapidly deteriorating conditions of Palestinian prisoners and detainees in Israeli jails in light of the COVID-19 pandemic.

The council “urgently requested” intervention over the health and safety of Palestinian prisoners, particularly minors, the vulnerable and chronically ill, and those held under administrative detention in contravention of international law.

Separately, six Israeli organizations have written to the ministries of public security, and justice calling for immediate action to reduce to a minimum the number of prisoners and detainees held in Israel in order to protect their health during the virus outbreak.

Omar Shakir, the director of Human Rights Watch (HRW) in Israel-Palestine, who is now residing in Jordan after being deported by Israel, urged the release of vulnerable prisoners.

“Israeli authorities should consider releasing detainees, particularly those at high risk of suffering serious effects of COVID-19, ensure high-quality health care for those who remain detained, and aggressively guard against the threat of spread in places of detention.”

The New York-based Human Rights Watch organization had called for the early release of low-risk category detainees including those soon scheduled to be freed, those in pre-trial detention for nonviolent and lesser offenses, and others whose continued detention was unnecessary or unjustified.

“Detained individuals at high risk of suffering serious effects from the virus include older people and people with underlying health conditions,” said the HRW.

Hind Shraydeh, the wife of American-Palestinian scientist Ubai Aboudi who has been detained by Israel since October 2019, told Arab News that the Israeli authorities were not paying any attention to global or even US calls for the release of prisoners over the COVID-19 threat.

“The White House and the US State Department have called on the world community to release American citizens held in jails due to the pandemic, but Israel appears to have ignored the calls coming from Washington,” she said.

Sahar Francis, director of the Addameer Prisoner Support and Human Rights Association, said that as of March this year, there were more than 5,000 Palestinian prisoners in Israeli jails