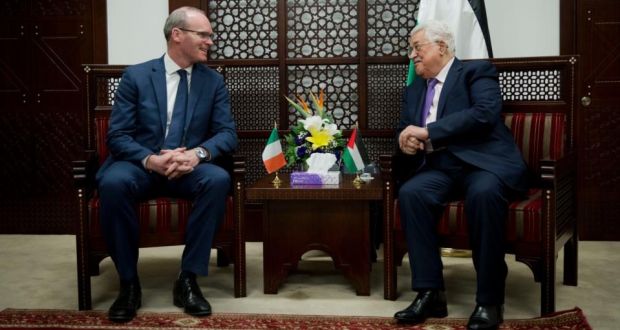 President Mahmoud Abbas discussed with Ireland’s Foreign Affairs Minister Simon Coveney the latest developments in the Palestinian territories, the Israeli measures against the Palestinian people, their land and holy sites, and the American bias position in favor of the Israeli occupation.

This came during a meeting held in the presidential headquarters in Ramallah, where president Abbas stressed that the continuation of Israel’s settlement policy in the Palestinian territories will destroy any chances for achieving real peace based on UN resolutions to end the occupation and establish the independent state of Palestine within the 1967 borders with East Jerusalem as its capital.

The President reiterated the need for Ireland and the rest of European countries to recognize the state of Palestine within the 1967 borders, in order to defend the right of the Palestinian people to self-determination, and to protect the internationally-endorsed two-state solution.

They further discussed the strong bilateral relations between both countries, affirming Palestine’s keenness to promote and strengthen them in the best interests of the two friendly peoples.

For his part, the Irish minister affirmed his countries position in support of the Palestinian issue, and the continued strengthening of bilateral friendship and cooperation.

He stressed Ireland’s continued support for the political process based on UN resolutions in accordance with the principle of a two-state solution to end the Palestinian-Israeli conflict and achieve a just and comprehensive peace in the region, stressing the positions of the European Union in this regard.