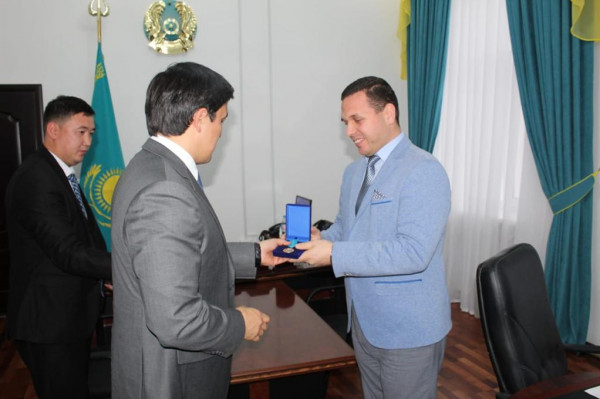 The Government of Kazakhstan of Atyrau province awarded Eng. Amin Mushtaha the title of ”Person of the Year” to be the first person of Arab origin to be awarded this title since Kazakhstan’s independence from the Soviet Union in 199, for his distinct role in strengthening local personal and assisting Kazakh citizens.

Amin Mushtaha was born in Gaza in 1976 and completed his university studies at the 6th of October University in Egypt and graduated of the Faculty of Mechanical Engineering, then returned to Gaza and worked as a mechanical engineer in the power plant project as the first national project after the Palestinian National Authority took over power in Gaza in 1999, He is a member of the Engineers Syndicate in Palestine and the Engineers Syndicate in Egypt.

He travelled to Kazakhstan to complete his studies and joined the Kazakh American University, He obtained Kazakh citizenship of the first degree, and began working with the Consolidated Contractors Company (CCC) in Central Asia as general manager of administrative affairs of the company and then to become director of public relations of the company to the former Soviet Union states.