Home Palestine News On World Photo Day: 144 photojournalists targeted by IOF in first half of 2019 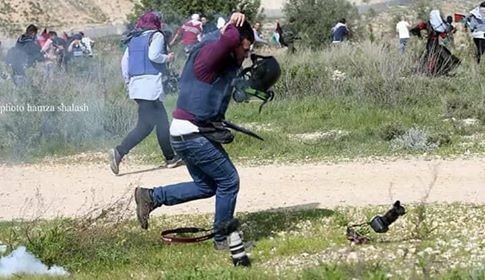 On World Photo Day: 144 photojournalists targeted by IOF in first half of 2019

On the occasion of World Photo Day  (19 august), the Freedoms Committee of the Palestinian Journalists Syndicate  said that more than 144 Palestinian photojournalists have been subjected to violations of the Israeli occupation in the first half of 2019.

According to a press release issued by the syndicate the frequency of photographers being targeted by the Israeli occupation is increasing, where the first half of this year witnessed 232 violations against the Palestinian press situation through various forms of violation, such as preventing the crews from filming and detaining them, confiscating and destroying their equipment, in addition to arresting and preventing travel and storming the houses of journalists and their institutions.

The statement called on Arab and international media and human rights organizations to support the Journalists Syndicate in its efforts to protect journalists from systematic attacks and to prosecute the Israeli occupation for its ongoing crimes.

On the occasion of the International Day, the statement also paid tribute to the photographers working in difficult and complicated circumstances inside Palestine.