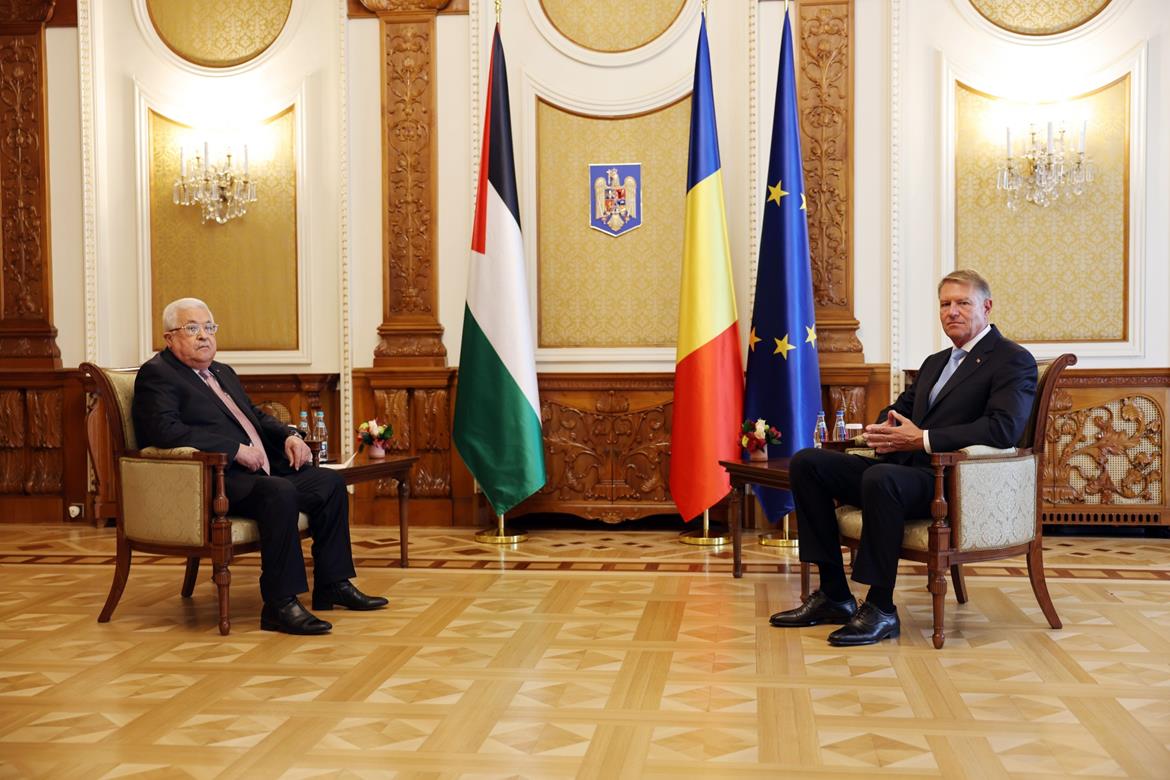 President Mahmoud Abbas today praised the relations of friendship and cooperation between Palestine and Romania, stressing the importance of strengthening them.

The President thanked his Romanian counterpart’s consistent positions in supporting the cause of peace in the region, and the Palestinian people’s right to freedom and independence, stressing the importance of implementing the signed agreements in preparation for the transition to the political horizon, which is based on the two-state solution on the 1967 borders in accordance with United Nations resolutions and ending the Israeli occupation of the land the State of Palestine with East Jerusalem as its capital so that all the countries of the region live in security, peace and good neighborliness.

The President stressed that the current situation is unsustainable but that efforts will continue to generate international support for the creation of initiatives to prevent the situation from deteriorating before it is too late, because the collapse of the two-state solution will lead to very difficult and complex choices.

“Despite all of this, we are ready to engage in any peace effort or initiative based on international legitimacy leading to the establishment of peace, security and stability for all in the region, ending the Israeli occupation and establishing the State of Palestine with East Jerusalem as its capital,” said President Abbas.

The two leaders met earlier during which President Abbas briefed his Romanian counterpart on the latest developments related to the Palestinian issue, efforts to revive the peace process, the continuous Israeli attacks on the Palestinian people and their Islamic and Christian holy places, in addition to the dangerous acceleration in the pace of settlement activities and land seizure.

After that, an expanded meeting was held between the two presidents, joined by the delegations of the two countries.

President Abbas arrived in the Romanian capital Bucharest yesterday on an official visit.

President Abbas bestowed the Grand Medal of the Order of the State of Palestine on President Iohannis in appreciation for his leadership and contributions in support of peace efforts in the Middle East and in appreciation of his role in strengthening friendship and cooperation relations between Palestine and Romania.

President Iohannis also awarded President Abbas the National Medal of the Star of Romania in appreciation of his role in strengthening friendship and cooperation relations between Romania and Palestine.

President Abbas leaves Romania today heading to France where he is scheduled to meet tomorrow with French President Immanuel Macron.