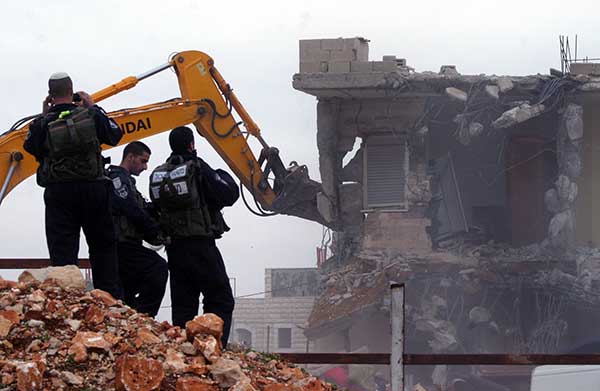 Posted By: Ebtehal Mohamedon: May 10, 2022In: Palestine News
Print Email

According to witnesses, staff from the Israeli municipality of West Jerusalem demolished a Palestinian-owned two-story building in the Silwan area of occupied East Jerusalem today.

According to them, Israeli police blocked off the area where the building is located before a municipality bulldozer demolished the Rajabi family’s building, displacing more than 30 people who lived in the second-floor apartments.

The family had been notified by the municipality of its decision to demolish their home due to a lack of a building permit.

Palestinians claim they are forced to construct without a permit because obtaining one from the Israeli municipality, which discriminates against Palestinian residents as part of its demographic war for the city, is nearly impossible, resulting in a severe housing shortage for Palestinians.

While Palestinians are not permitted to develop in their cities or on their lands, the municipality and the Israeli government construct tens of thousands of dwelling units for Israelis on land taken from Palestinians.