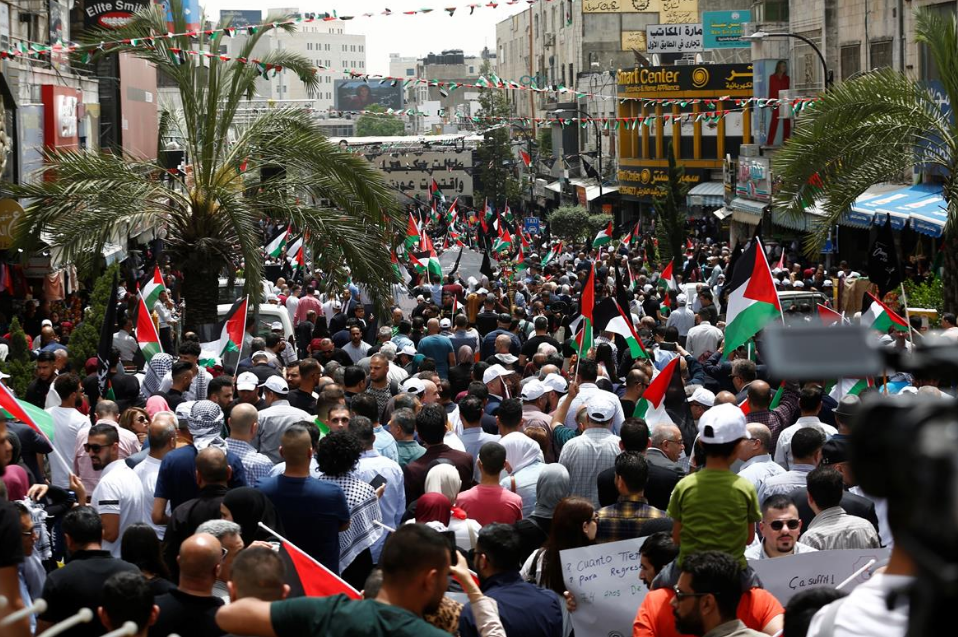 Thousands of Palestinians marked today the 74th anniversary of the Nakba of 1948, when nearly 600,000 indigenous Palestinians were ethnically cleansed from their homes in historic Palestine by invading Zionist militias.

In Ramallah, in the center of the occupied West Bank, hundreds gathered outside President Yasser Arafat Mausoleum and waved flags of Palestine, black banners and keys of return to affirm the right of return of the Palestinian refugees and their offspring to their pre-1948 homes. The participants then marched for Manara Square in downtown Ramallah where a central rally was held commemorating the event.

The Nakba anniversary events this year are organized under the slogan “Enough with 74 years of injustice and double standards”, which embodies the continuing injustice inflicted upon the Palestinian people to date by the Israeli occupation and the failure of the international community to implement its resolution.

At 12:00 after midnight, a vigil of silence for 74 seconds will be observed across the occupied Palestinian Territories in memory of the 74 years that followed the Nakba events, while sirens will go off via loudspeakers of mosques and via local radio stations. Church bells will also ring during the events marking the anniversary of the tragic event.

The word “Nakba” means “catastrophe” in Arabic, and refers to the systematic ethnic cleansing of two-thirds of the Palestinian population at the time by Zionist paramilitaries between 1947-1949 and the near-total destruction of Palestinian society.

During the events that led to the establishment of today’s Israel, Zionist forces took more than 78 percent of historic Palestine, ethnically cleansed and destroyed about 530 villages and cities, and killed about 15,000 Palestinians in a series of mass atrocities, including more than 70 massacres.

This year marks 74 years of Al-Nakba, or the Palestinian experience of dispossession and loss of a homeland. The anniversary comes at a time where many are angered by the killing of cold-blooded murder of Al Jazeera veteran journalist Shireen Abu Akleh by Israeli occupation forces last week in Jenin.