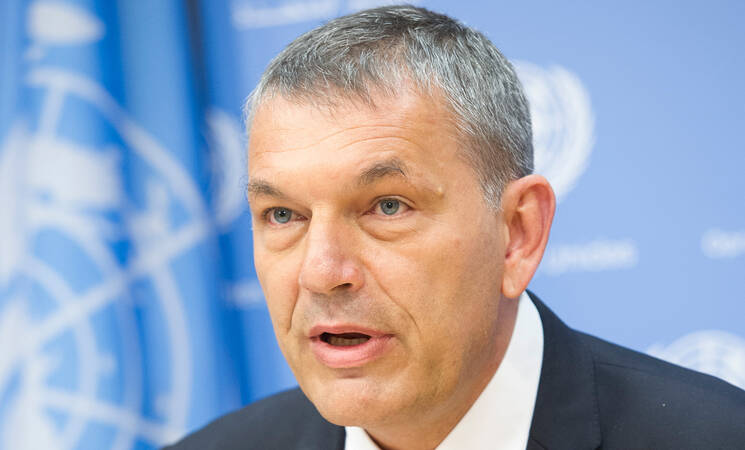 An UNRWA official said on Wednesday that the political support expressed by the United Nations to the relief agency was not translated into matching financial resources.

Speaking in the 157th ordinary session of the Council of the Arab League at the level of foreign ministers in Cairo, UNRWA Commissioner-General, Philippe Lazzarini, stated: “The almost unanimous political support expressed by the UN General Assembly to the Agency is not translated into matching financial resources.”

He explained that the UN relief agency for Palestine refugee “is expected to raise voluntary funds to run its services, but without sufficient and predictable funding from all those supporting our mandate, we cannot maintain our services in a sustainable way anymore.”

“Last year, we welcomed the return of the US among our largest donors. European and other donors have remained steadfast in their support. Governments in the Arab region continue to express a strong political support to the rights of Palestine refugees.”

Lazzarini added: “Four years ago, the contribution from the region to UNRWA operations amounted to close to 25 percent of our budget. Last year, however, it reached a record low with an overall contribution of less than 3 percent,” and warned that “this does not really echo the strong political support to Palestine refugees.”

He expressed his gratitude to members of the Arab League for ongoing financial support to UNRWA, while pointing that the agency concluded multiyear funding agreements with Kuwait and Qatar in 2021.

He urged members of the Arab League to “first, to help the Agency push back against allegations that seek to undermine the rights of Palestine refugees, and second, to shield the Agency from collateral impact of Member States political decision.”

“With the war in Ukraine today, food experts and economists are expecting a significative increase in wheat and fuel prices that will make access to food more costly.”

“Needs in the region and among Palestine Refugees will increase even more at a time the World’s attention will be on Ukraine.”

He asserted that “the mandate of UNRWA is a common responsibility and the stability of the region is in our common interest.”

He referred to the ongoing deterioration of the situation of Palestine refugees across the region as well as to the acute impact that last Israeli onslaught on the besieged Gaza Strip continues to have on the daily life of the population, the economy and the infrastructure.

He expressed major concern over the deteriorating security and socio-economic situation in the West Bank, including East Jerusalem, especially that the unprecedented financial and economic collapse of Lebanon pushed over 70 per cent of Palestine refugees under the poverty line, and the vast majority of Palestine refugees in Syria now live on less than US$ 2 a day.

“The economic situation in Jordan is dire, and Palestine refugees report increased hardship,” he added.

While Lazzarini said that “UNRWA has managed to provide critical services despite its chronic underfunding through austerity measures,” he warned that the agency has “exhausted ]its[ ability to continue to deliver education, health and social protection services to Palestine Refugees at the same level and quality we used to do.”

He ascribed this exhaustion to the increase of Palestine refugees’ needs and the subsequent increase of the costs of the services that Palestinian communities and Member states expect the Agency to deliver.