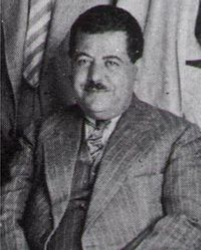 Muhammad ‘Izzat Darwazeh (1888–1984) was a Palestinian politician, historian, and educator from Nablus. Early in his career, he worked as an Ottoman politician in Palestine and Lebanon. Darwaza had long been a sympathizer of Arab nationalism and became an activist of that cause following the Arab Revolt against the Ottoman Empire in 1916, joining the nationalist al-Fatat society.

As such, he campaigned for the union of Greater Syria (modern-day Levant) and vehemently opposed Zionism and foreign mandates in Arab lands. From 1922 to 1927, he served as an educator and as the principal at the an-Najah National School where he implemented a pro-Arab nationalist educational system, promoting the ideas of Arab independence and unity. Darwaza’s particular brand of Arab nationalism was influenced by Islam and his beliefs in Arab unity and the oneness of Arabic culture. Later, Darwaza co-founded the nationalist Istiqlal party in Palestine and was a principal organizer of anti-British demonstrations. In 1937, he was exiled to Damascus as a result of his activities and from there he helped support the Arab revolt in the Mandatory Palestine.

He was incarcerated in Damascus by French authorities for his involvement in the revolt, and while in prison he began to study the Qur’an and its interpretations. In 1945, after he was released, Darwaza eventually compiled his own interpretation entitled al-Tafsir al-Hadith. In 1946, he joined the Arab Higher Committee led by Haj Amin al-Husseini, but resigned the next year after being disenfranchised by al-Husayni’s methods. He left for Syria afterward and briefly aided in the unity talks between Syria and Egypt in the mid-1950s. By the time of his death in 1984, Darwaza had written over thirty books and published numerous articles on the Palestinian question, Arab history, and Islam.

Darwaza was born to a middle-class Sunni Muslim mercantile family in Nablus. The Darwaza family had long been involved in textiles and had extensive trade relationships with merchants in Beirut and Damascus.

Izzat received elementary and preparatory education in Ottoman government-run schools in the city. In addition to Arabic, he learned Turkish and English, as well as a basic knowledge of French which he strengthened in by the end of his formal education. Darwaza left school without going to Istanbul or Beirut to finish his education as was the custom of his generation.

Originally, Darwaza supported the Ottoman Empire based on his feelings of identification with Islam and of belonging to the larger Ottoman nation. In 1906, he served in the local Ottoman administration as a clerk in the Department of Telegraphic and Postal Services in Nablus. His first assignment in that department was for the District of Beisan and northern Palestine.

His loyalty to the Ottomans eroded, however, due to the impact of the new governments’s Turkification policies which he viewed as repressive against his ideals. In 1913, he joined an anti-Zionist group based in Nablus that sought to prevent the sale of Arab-owned land to Jews by submitting petitions to the Ottoman sultan, or by buying land for sale to preempt its purchase by Jews. In June 1913, he helped to prepare and became secretary of the First Palestinian Congress in Paris.

In 1914, he established the Arab Scientific Society whose purpose was to spread Arabic culture in the region through the establishment of Arabic schools. During World War I, Darwaza served as Postal Directorate-General of Beirut and retained this post until 1918.

Following the World War I Armistice, Darwaza held several political posts including Secretary-General of al-Fatat from May 1919 to March 1920, Secretary of the Muslim-Christian Association’s Nablus branch, and Secretary of the First Palestine Arab Congress in Jerusalem in 1919.

Darwaza continued his political activity, representing Nablus in the Fourth Palestinian Congress in May 1921 and the Seventh Palestinian Congress in June 1928. Darwaza wrote textbooks and was an educator himself. He began to edit in the al-Ja’miyya al-Arabiyya newspaper in the early 1930s,  In August 1932, he along with Awni Abd al-Hadi and others founded the Istiqlal (Independence) party in Palestine. Darwaza was one of the principal organizers of the 1936–39 Arab revolt in Palestine which first erupted in his hometown of Nablus with the launch of the Palestinian general strike.

After resigning from the AHC, Darwaza spent the rest of his life in Syria where he left politics to concentrate on literature. Although he did much of his writing in the 1930s and 1940s, he did not have any of his works published until the 1960s. As a pan-Arab intellectual, Darwaza aided in establishing the union between Syria and Egypt forming the short-lived United Arab Republic. After Egypt adopted its 1956 constitution declaring that it was an Arab country and its people a part of the Arab nation, Darwaza concluded that Egypt and Syria were in a position to unite. In 1983 Darwaza granted Palestinian historian Muhammad Y. Muslih an eight-day interview and allowed him to photo-copy his memoirs in entirety. Muslih noted that Darwaza was failing in health at the time. He died in Damascus in 1984 at the age of 96. Darwaza had three daughters, Najah, Salma, and Rudaina and a son, Zuhair.

One of the first modern histories of the Arab nation in contrast to a history of an individual Arab country was composed by Darwaza in the late 1920s under the title Lessons of Arab History. In 1934, Darwaza published a widely read story, The Angel and the Land Broker, reflecting popular Arab sentiments against the growing “Zionist threat” and attacking brokers who tempted Palestinian land owners to sell their land to Jews.

Later in his lifetime after leaving politics, Darwaza published memoirs that discussed in detail the city of Nablus in the late 19th and early 20th centuries.