Sakhr Habash (Abu Nizar) was Born in Beit Dajan, near Jaffa, in 1939; became refugee in the Nakba of 1948, ending up first in Ramallah, then in Balata Refugee Camp near Nablus.

Habash joined the Ba‘athists in 1952; studied Geology and Water Resources at Cairo’s Ein Shams University from 1958.

He got a master’s degree in geoengineering from the University of Arizona in the United States of America in 1965, and worked as an official for the Natural Resources Authority in Jordan.

He turned to the Palestinian national movement and joined Fatah in  1957, when he became responsible for recruitment; was appointed Fateh regional command in Lebanon in Oct. 1972. 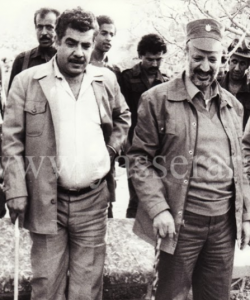 He was elected Secretary of the Revolutionary Council in 1976, then a member of the movement’s central committee. He participated in the Battle of Karama 1968 and took over several missions in “Fatah” in Jordan

He worked as a deputy for the martyrs Kamal Adwan and Kamal Nasser, and founded the ” Cubs of Revolution”  Foundation after 1967 in Jordan, and served as Palestine’s ambassador to Russia in 1983.

He founded the National and Islamic Forces Committee in 2000, established the Forum for Thought and National Dialogue, and supervised many Fatah cadre courses since the1970s.

He has written many poetic and literary works, including several novels.He has several collections of poetry, including: “Need to beat”, “But It’s my homeland”, “Song of the Stone”.