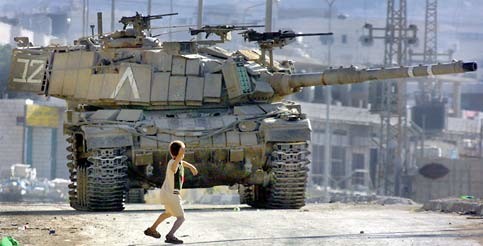 On 28 September 2000 then Israeli opposition leader Ariel Sharon stormed Al-Aqsa Mosque with heavily armed Israeli policemen and soldiers provoking a Palestinian uprising that lasted five years and left over 3,000 Palestinians and 1,000 Israelis dead. Some 17 years later the occupation continues, the Palestinian people remain vulnerable, and Hamas and Fatah remain at odds.
The Second Intifada rose against the backdrop of the failed Camp David talks; a month before Israeli Prime Minister Ehud Barak and Palestinian Authority (PA) Chairman Yasser Arafat had failed to come to a peace agreement. They disagreed over Israel’s occupation of Palestinian territory, the status of Jerusalem and the right of return for Palestinian refugees. Consequently, the promised declaration of a Palestinian state was postponed.
It was on the last Thursday of September when Sharon chose to visit Al-Aqsa Mosque accompanied by heavily armed Israeli police and soldiers.
The decision was met with widespread outrage from Palestinians who had recently marked the anniversary of the Sabra and Shatila massacre. Sharon was found responsible for failing to stem the bloodshed. Their reaction was also an expression of their deep-seated frustration at the ongoing Israeli occupation, which once again peace talks had failed to resolve. A defiant, public violation of the Muslim holy site proved a step too far.
The next day after Friday prayers protests erupted across the Old City of Jerusalem; six Palestinians were killed and some 300 more injured. In the following days mass demonstrations took place in the West Bank and Gaza, prompting a violent response from Israeli occupying forces. Amos Malka, then director of military intelligence, estimated that in the first few days of the demonstrations the Israeli army fired approximately 1.3 million bullets. A report by Amnesty International found that the majority of Palestinian casualties during this time were civilian bystanders and that 80 per cent of those killed in the first month were not endangering the lives of Israeli officials. On Saturday 30 September the murder of 12-year-old Muhammad Al-Durrah by Israeli forces as he took shelter with his father was captured on camera and sent shockwaves across the world.
The video showed father and son crouching behind a concrete pillar as they try to escape Israeli forces who had opened fire. Al-Durrah’s father could be seen signalling to try and get the soldiers to stop firing, only for a burst of Israeli gunfire to put a premature end to Muhammad’s life.
The footage became iconic, representing the oppression endured by the Palestinians, and the indifference of Israel. The months that followed witnessed more violent crackdowns, leaving hundreds dead and thousands injured. Amnesty International’s report on the first year also found that the “overwhelming majority of cases of unlawful killings and injuries in Israel and the Occupied Territories have been committed by the IDF using excessive force. In particular, the IDF have used US-supplied helicopters in punitive rocket attacks where there was no imminent danger to life.” The ending of the intifada is disputed, but is marked as the day when Sharon and Abbas declared a ceasefire at a summit in Sharm El-Sheikh on 8 February 2005.
On June 16, 2002, Israel added another restriction to its list of human rights violations by beginning construction of the Apartheid Wall.
Most of the wall has been built on Palestinian land, allowing Israel to annex the land that lay between the wall and 1948 Palestine (today, called Israel). Two years later, the International Court of Justice ruled illegal and ordered the construction to be stopped. Israel has yet to abide by the ruling. According to the Palestinian Center for Human Rights, at least 4,973 Palestinian civilians were killed over the course of the Second Intifada. Among them were 1,262 children, 274 women, and 32 medical personnel attempting to administer aid to injured civilians. More than 10,000 children were wounded during the five years of violence, as reported by the Swiss-based Defence for Children International, a non-profit organization dedicated to protecting child rights. Most of the deaths and injuries came as a result of air strikes against densely populated areas in the Gaza Strip and major land assaults on various West Bank cities, villages, and refugee camps.