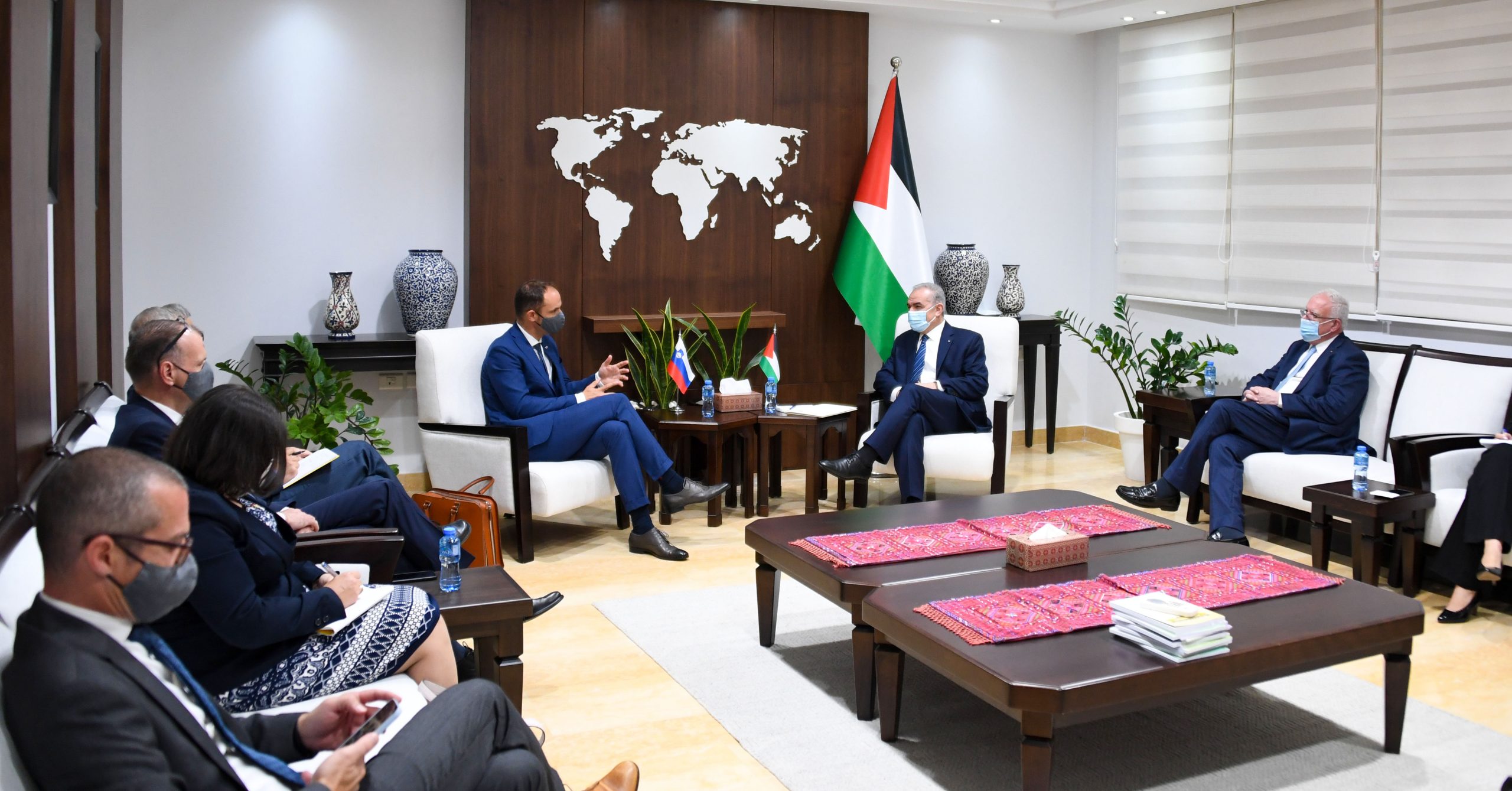 Prime Minister Muhammad Shtayyeh today told visiting Slovenian Foreign Minister Anze Logar that Europe should play a bigger and more active role in the Middle East peace process.
Shtayyeh received Logar at his office in Ramallah in the presence of Foreign Minister Riyad Malki during which they discussed the latest political developments and ways to enhance cooperation between their two countries in all fields.
The Prime Minister called on Slovenia, which currently holds the rotating presidency of the European Union, to lead Europe in reviving the political process by reactivating the role of the International Quartet to return to negotiations on the basis of UN resolutions.
“We do not have any real partner for peace,” said Shtayyeh. “Israel has no serious intention for negotiations, and we are ready for any serious political path that fills the current political vacuum through an international multilateral framework that guarantees the end of the Israeli occupation and the establishment of an independent and sovereign Palestinian state on the June 4, 1967, borders with Jerusalem as its capital, and a just solution to the refugee issue.”
The Prime Minister added: “The Palestinians, the original owners of the land, are living in extraordinary, cruel and unjust conditions. Israel continues its racist practices against them, increases the settlement area and its grip on their land, and continues the siege of Gaza and the Judaization of Jerusalem, and controls the crossings, land and water, which leads to the systematic destruction of the two-state solution.”
He continued: “We share with Slovenia our respect for international law, human rights, and the values and principles of justice, freedom, dignity and equality, and we hope that it will play its role by calling on Israel to stop its settlement policy, land seizure and extrajudicial executions against our people and violations against Islamic and Christian holy places, facilitate freedom of access to these place in order to perform worship, in addition to end its occupation of Palestinian lands.”
Shtayyeh reiterated the insistence of the Palestinian leadership, headed by President Mahmoud Abbas, to hold elections to preserve the national project, end division and achieve unity, calling on the international community to pressure Israel to abide by the signed agreements, especially with regard to allowing elections to be held in occupied Jerusalem.
For his part, Logar affirmed his country’s support for the two-state solution and the achievement of a just and comprehensive peace, stressing the continuation of cooperation and joint work with Palestine, and its support in all fields.