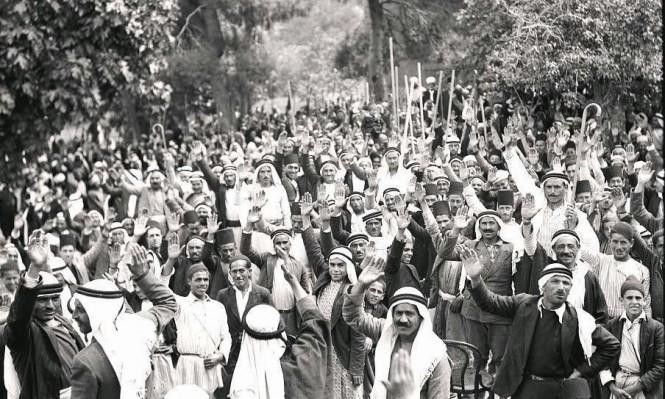 Al-Buraq Wall has remained an Islamic Waqf and a pure right for Muslims. None of its stones date back to King Solomon’s era as the Jews claim. The Wall has a big religious status for Muslims. It is associated with the miracle of the Prophet Muhammad (peace be upon him), known as Israa & Mi’raj [Prophet’s night travel & ascension to heavens].  The name of the wall, Al-Buraq, was after the animal that the Prophet (PBUH) used to ascend to the sky at night from Makkah to Al-Aqsa in Jerusalem.

The Jews call the wall ‘the Wailing Wall’ because their prayers next to it take the form of crying and wailing. During the era of the British Mandate on Palestine, the visits of Jews to the Wall increased, with Muslims feeling the danger, thus resulting in the outbreak of a revolution on 23 August 1929. The Zionist movement has sought to own the al-Buraq Islamic Wall since 1918, and the Zionist mission. However, the frictions and Zionist of the feelings of Muslims at the wall began in 1922, when large numbers of Jews arrived at the wall during Yom Kippur, accompanied by seats to sit during prayer. The Muslims protested. 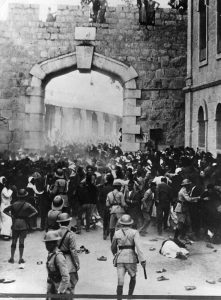 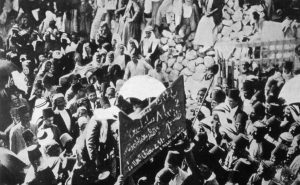 In 1928, when Jews brought the seats, erected a curtain in front of the wall to separate the men and women, filled the place with tables, cupboards, lamps, etc., the Muslims protested. The authorities demanded the removal of all these tools and the Jews. The police removed them by force, but the Jews They were angry. The British Colonial Secretary In the same year presented a White Paper , which stipulates the commitment of his government to maintain the status of the Wall Buraq, and urged Muslims and Jews to agree among

themselves .The Zionist March moved through the streets of Jerusalem until it arrived near the wall of al-Buraq, and there they lifted the Zionist media, and the participants began to chant the Zionist anthem (HTKFA), chanting (our wall is a wall).

The next day (Friday, 16 August 1929) coincided with the anniversary of the Prophet’s birthday. August 17, a confrontation took place between Arabs and Jews in Jerusalem. A Jew stabbed a stab who died two days later. Eleven Jews and fifteen Arabs were injured. The death of the Jewish youth increased tension. His funeral turned into a riot.  Friday 23 August There is a rumour that the Jews killed two Arabs, the Arabs rebelled and poured into the yard of the Al-Aqsa Mosque, After Friday prayers, a group of the old town came out, through the gates of Jaffa and Nablus, and began clashes with the Jews.  The Muslim protesters split in two; one headed through the Jaffa Gate to the new town, and they killed four Jews stabbed with knives, they beat others and broke the doors of the shops. Some of them went to the Yemin Moshe neighbourhood. Haganah forces repelled them. An hour later the police opened fire on the demonstrators and dispersed them, The second part of the demonstrators, they turned to the city park on Jaffa Street, the Jews had put the barricades, they stood behind them, they managed to repel Arabs and prevented them from entering the streets where Jews reside, but they managed to enter the George’s Lane , stormed homes and killed four Jews, as Arab groups coming from the Kfar Shilouah side tried to break into the old city, but failed because of the presence of armed Haganah members.

Days after Palestine is being shake, conditions began to calm down, and the events of the Al-Buraq Revolution, which was the first revolution to erupt in Palestine against the Zionist and British presence, resulted in 133 Jews dead and 339 wounded, including 198 serious injuries. While the number of Arabs killed reached 116, and the number of wounded was 232, according to (Shaw’s report), which admitted that most of the Arab injuries were at the hands of British forces. On the other hand, the Shaw committee recommended sending another committee to define the rights in the Al-Buraq Wall, and the League of Nations Association agreed on January 14, 1930 to send the committee.

The committee concluded several conclusions, the most important of which is that the ownership of the Western Wall belongs to Muslims alone and they have the right to it alone because it forms an integral part of the Haram al-Sharif Square.