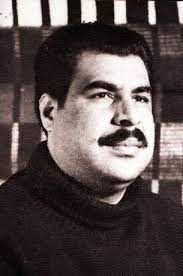 Mamdouh sabry was born in the village of Aqer, near Ramleh, in 1937, where he completed his primary and preparatory school, then completed his secondary education at Khalid Ibn Al-Walid School in Nuseirat, to which his family sought refuge after the catastrophe of 1948.

He was educated in Gaza and Egypt; received a Bachelor in Geography from Alexandria University, Egypt; he went to Algeria worked as a teacher there; served as head of the Cultural Dept. at the PLO Office in Algeria.

He received military training in Algeria and China; became the deputy head of military arm of Fateh (Al-‘asifa); was also a member of Fateh Central Committee; lead Palestinian Resistance operations in Palestine in the late 1960s.

He chaired and participated in several delegations of the Palestinian revolution to China, the Soviet Union and a number of Arab countries.

The martyr Abu Sabri was a model of the fighter who denies himself and puts the interests of the homeland and the cause above his own interests, adheres to the revolutionary behavior and its rules, and has strong will and courage.