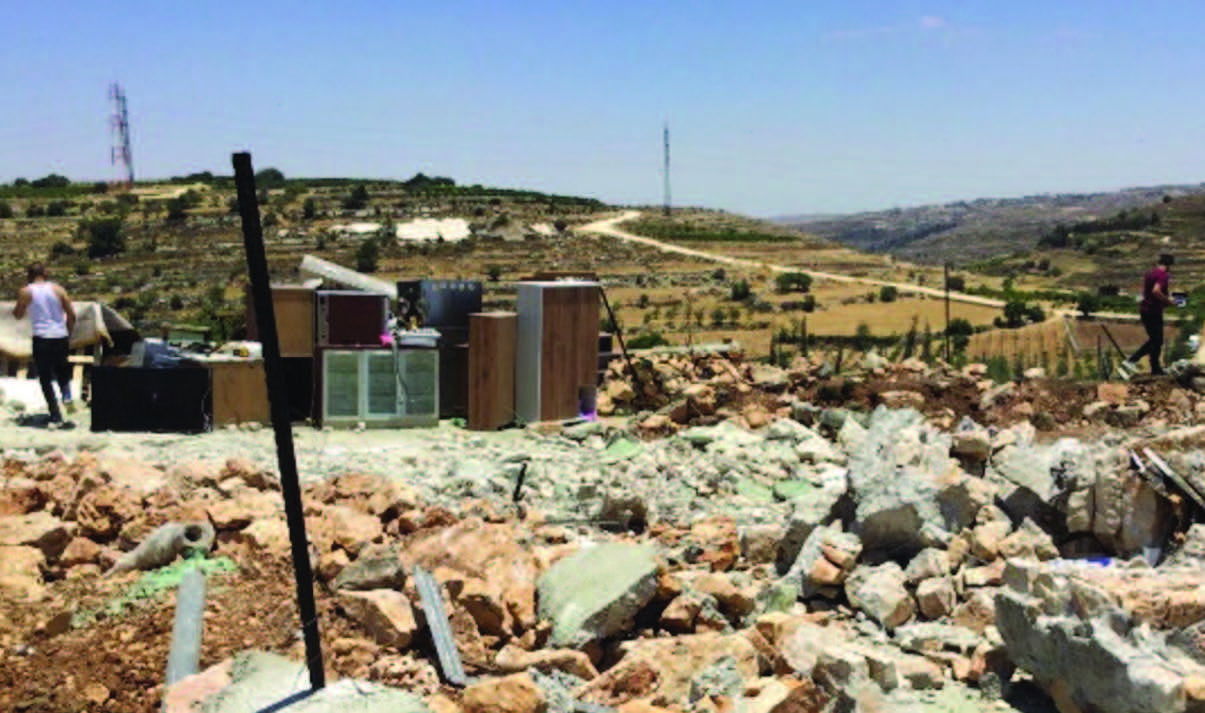 In June, a sevenfold increase in demolished Palestinian-owned structures, compared with May – UN

In June, the Israeli occupation authorities demolished, forced people to demolish, or seized 91 Palestinian-owned structures across the West Bank, including East Jerusalem, a sevenfold increase compared to May, according to the West Bank demolitions and displacement report by the United Nations Office for the Coordination of Humanitarian Affairs (OCHA) in the occupied Palestinian territory.

This resulted in the displacement of 108 people, including 62 children, and otherwise affected the livelihoods, or access to services, of nearly 2,700 others, it added.

All the structures were located in Area C of the occupied West Bank, which remained under full Israeli military control, or occupied East Jerusalem, and were targeted for lacking building permits, which are nearly impossible for Palestinians to obtain.

The number of structures demolished or seized in June is the highest this year, surpassed only by February (153), with a sevenfold increase, or 600 per cent, compared with May, said OCHA.

Twenty of the structures demolished or seized had been provided as humanitarian aid. In addition, a European Union-funded school in Um Qussa, in the Hebron district, at a value of over 14,000 euros, received a stop-work order, while another three donor-funded residential structures received a notice to submit an objection to previously issued demolition orders.

So far in 2021, 212 structures, or 57 percent of all structures targeted in Area C, have been seized without, or with very short, prior notice, preventing affected people from objecting in advance.

On two separate occasions in the Massafer Yatta area (South Hebron Hills), the Israeli authorities demolished three main roads connecting the surrounding villages, in addition to a water network supplying water to multiple communities. The incidents affected some 2,300 people, including 1,140 children and left the communities without water for three and seven days, respectively.

Also, in Area C, in Halhul (Hebron) and Jinsafut (Qalqiliya), the Israeli authorities demolished a home and a livelihood structure on the basis of Military Order 1797, which provides only a 96-hour notice and very limited grounds for legally challenging a demolition. The incidents left 14 people, including seven children displaced.

In East Jerusalem, the Israeli authorities demolished or forced people to demolish 20 structures. The month of June saw an increase in structures demolished in East Jerusalem by 44 percent, compared with the previous five months, to a total of 65 structures since the beginning of 2021. Eleven of the structures, or 55 percent, were demolished by the owners following the issuance of a demolition order. In Jabal al Mukkabir, owners were forced to demolish seven structures following the issuance of such orders, displacing five people, including three children, and affecting the livelihoods of another 27 people, including 17 children.

So far in 2021, the proportion of structures demolished by their owners in East Jerusalem, following the issuance of demolition orders, reached 45 percent, up from an average of 27 percent in the previous five years. This is attributed to new Israeli legislation, which limits the authority of Israeli courts to intervene and enables the West Jerusalem Israeli municipality to exert pressure on families to demolish their properties themselves.

In late February 2021, the municipality reactivated demolition orders against 68 Palestinian structures, mainly residential, in the al-Bustan area, in the Silwan neighborhood of East Jerusalem, which would lead to the displacement of up to 1,500 Palestinians. The Local Affairs Court ruled for a six-month deferral for 52 of these structures, until 15 August. Out of the 16 structures subject to impending demolitions, on 29 June, a livelihood structure was demolished. During the incident, Israeli forces blocked all entrances to the area. In clashes that followed, more than 13 Palestinians were injured and at least four were arrested, including the owner of the demolished livelihood structure.