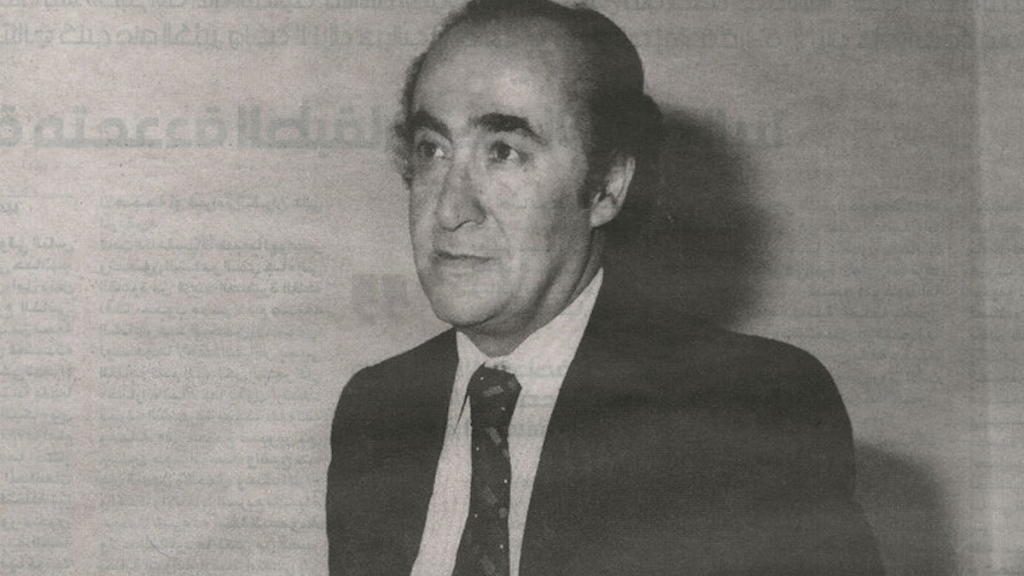 Jabra Ibrahim Jabra was born in Bethlehem to Ibrahim and Mariam. He had two brothers, Yusuf and Isa, and one sister, Sawsan. He was married to Lami‘a al-Askari, daughter of the Iraqi notable Ja‘far Pasha al-Askari. They had two sons, Sadir and Yasir.

He completed his elementary education at the Syriac Orthodox School in Bethlehem, and then in 1929 enrolled at the National Bethlehem School.

Upon graduating from the Arab College, the Palestine Department of Education sent him on a scholarship to England in 1939, where he studied for a few months at Exeter University and then transferred to Cambridge University to study English literature. He was granted a Bachelor of Arts degree in English literature in 1943.

Upon graduation, Jabra returned to Jerusalem where he was appointed teacher of English literature at Rashidiyya College; he founded the Arts Club at the Young Men’s Christian Association in Jerusalem and became its president. He continued his studies and obtained a Master of Arts degree in English literature from Cambridge University in 1948.

In early 1948, his family was forced to flee when Zionist forces blew up a number of houses in the Baq‘a quarter of Jerusalem where they lived. They took refuge in Bethlehem.

Following the Palestine Nakba in 1948, Jabra emigrated to Baghdad where he worked as a lecturer at the Tawjihiyya College and then at the College of Arts and Sciences founded during the academic year 1949–50. In autumn 1949, Jabra, along with a British colleague, founded the Department of English literature at that college. He also lectured at the Higher Teachers Training College and at the Queen Aliya College for Girls.

In 1951, he and the celebrated Iraqi sculptor and painter Jawad Salim founded the Baghdad Society for Modern Art. In 1952, Jabra married Lami‘a al-Askari, his colleague at the Higher Teachers Training College. At about the same time he was granted a research fellowship in literary criticism by Harvard University, where he remained until February 1954.

Returning to Baghdad that same year, Jabra was hired by the Department of Public Relations of the Iraq Petroleum Company (IPC). Five years later, he was appointed head of communications of the administration and staff and then head of the publications division. He continued to lecture at the College of Arts and Sciences of Baghdad University until 1964.

In 1961, Jabra had founded a literary magazine for IPC entitled Workers in Oil, which he continued to edit until 1972.

When Iraqi oil was nationalized in 1972, Jabra moved to the National Iraqi Oil Company where he became head of information, publications, and translation, and where he founded a magazine called Oil and the World. In 1975, the University of California at Berkeley invited him as a visiting professor. He spent the first six months of 1976 teaching contemporary Arabic literature and lecturing at other US universities.

In 1977 Jabra was appointed cultural counselor at the Ministry of Culture and Information, a position he retained until his retirement in 1984. Between 1980 and 1983 he edited a magazine called Arab Arts, published by Wasit Publishing House in London. He was also president of the League of Iraqi Art Critics, which was founded in 1982.

He was an accomplished artist and a passionate fan of western classical music. He was also a highly accomplished translator of English novels, poetry, plays, and criticism; his translations of some of Shakespeare’s works are regarded as among the very finest and most accurate translations into Arabic.

Several of his works have been translated into English, French, German, and Italian.

Jabra was awarded many prizes and medals, including the Targa Europa Award for Culture from Italy in 1983.

The Literature and Art prize by the Kuwait Foundation for the Advancement of Sciences in 1978; the Creativity in the Novel Prize in Baghdad in 1988; the Jerusalem Medal for Culture, Arts and Literature by the PLO in 1990.

The Medal of Merit (First Class) by the President of the Tunisian Republic in 1991, and the Thornton Wilder Prize for Translation by Columbia University, New York, in 1991. Jabra Ibrahim Jabra died in Baghdad and was buried there.