BREAKING NEWS
Home News Malki before UNSC: Israel may believe it is winning, but it is nowhere closer to defeating the Palestinian people 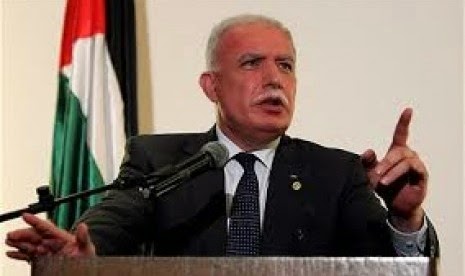 Malki before UNSC: Israel may believe it is winning, but it is nowhere closer to defeating the Palestinian people

Foreign and Expatriate Affairs, Riyad al-Malki, said before the UN Security Council emergency meeting held today to discuss current escalations in occupied Palestinian territory that “Israel may believe it is winning, but it is nowhere closer to defeating the Palestinian people. Our people will never surrender or forgo their rights. Palestinian freedom is the only path to peace.

“Since peace is the responsibility of this Council, helping achieve Palestinian freedom is its legal and moral duty,” he said.

Following is the full speech of the Minister of Foreign and Expatriate Affairs, Riyad al-Malki,  before the UN Security Council:

Allow me to thank China for convening this important meeting and for being represented at Ministerial level, as well as Tunisia for their relentless efforts within this Council, and my Arab brothers who decided to participate in this meeting as an integral part of their efforts to end the aggression against our people, land and holy sites. Allow me also to thank the Secretary General for his participation and ongoing efforts, together with Special Coordinator Tor Wennesland, to end this latest aggression against our people.

There are no words that can describe the horrors our people are enduring. Baby Omar Al Hadidi came to life only 5 months ago and will now have to go through life without his mother and brothers Osama 6, Abdelrahman 8, Suheib 14, all killed by an Israeli airstrike. His family is not the only one. Members of the family Abu Hattab were killed, including Alaa 5, Bilal 10, Youssef 11, and the family Al Tanani, Rawya was 4-months pregnant, she was killed together with her husband and sons Ismael 6, Ameer 5, Adham 4, Mohammed 3. A few hours ago, 15 members of the family Al-Qolak were killed, including Zeid 8, Adam 3 and Qossai 1 and their parents. Aziz survived, he is 10.

When you embrace your children and grandchildren tonight, think of our children and of how you can honour those killed and spare those still alive. Think of what it feels to see your world crumbling down and not being able to protect them. Think of what it means to sleep not knowing which one of you will wake up. Remember that each time Israel hears a foreign leader speak of its right to defend itself, it is further emboldened to continue murdering entire families in their sleep.

Israel is killing Palestinians in Gaza, one family at a time. Israel is trying to uproot Palestinians from Jerusalem, expelling families, one home, and one neighborhood at a time. Israel is persecuting our people, committing war crimes and crimes against humanity. Some may not want to use these words, but they know they are true. Israel is unapologetic and relentless in pursuing its colonial policies. We are therefore left with two questions.

The first one is: What are the Palestinian people entitled to do to resist such policies and defend themselves. The following questions hold the answer: Is violence when committed by Palestinians terrorism and when committed by Israel self-defense? Who will be arrested, the settlers or those resisting their presence and assaults? Will our peaceful protesters enjoy international protection or be left to face Israeli bullets and slander? Will we receive support for investigations by the ICC, or will some search for reasons to object, shielding war criminals and depriving Palestinian victims from any avenue for justice? Will products of Israeli settlements be banned, or will those who call for boycott be prosecuted? What are we entitled to do apart from hoping that one day Israel will be ready to end its occupation on its own and to negotiate peace?

The second question is: What are the tools the international community is ready to deploy to ensure compliance by Israel with its obligations and an end of its occupation, tools it uses regularly in other conflicts. Military intervention? Sanctions? Suspending bilateral relations? Prosecuting perpetrators of crimes? Deploying protection forces? Imposing an arms embargo? Or will it rely simply on the possibility of convincing the occupying Power to end its colonial occupation while history has proven that Israel is not willing to listen?

Israel keeps doing the same things expecting a different result. Did it believe that its troops storming the holiest of sites, Al Aqsa Mosque, on the holiest of months, Ramadan, and on the holiest of nights, the night of destiny, would bear no consequences? Did it believe Palestinians would accept to live in enclaves and wait for the Israeli settlers to seize the next house? Did they expect Palestinians to coexist with the occupation, its walls, its blockades, its settlements and its prisons? There is no people on earth that would tolerate this reality.

Israel keeps telling you “put yourself in our shoes?” But Israel is not wearing shoes, it is wearing military boots. It is an occupying and a colonial power. Any assessment of the situation that fails to take into account this fundamental fact is biased, discredited and unjust. We are not two neighbours living side by side in peace. Israel is the armed thief who has entered our house and is terrorizing our family. It destroys our homes, oppresses our people, generation after generation, decade after decade, and then claims a right to security that it denies us.

Why don’t you put yourself in our shoes. What would you do if your country was occupied, your people persecuted, besieged, massacred? Better yet, what did you do to achieve your independence and end the oppression of your people? We made a difficult choice to pursue a peaceful path to freedom, and it is in everybody’s interest for that path to be successful. But that will not happen without ensuring that Israel bears the cost of occupation instead of reaping its benefits.

Israel is not only an occupying Power, it is a nuclear power, it has a military arsenal, the iron dome, shelters, while our people in Gaza are besieged, trapped, with nowhere to go and no safe haven. Even the UNRWA schools within which they shelter are vulnerable to Israeli attacks. It is Palestinian civilians who need protection. They deserve compassion, solidarity and action.

The Palestinian people have risen everywhere, because they are victims everywhere. Victims of dispossession, forced displacement, discrimination and denial of rights on both sides of the Green Line and in exile. When hearing Israeli officials speak one could wonder how horrible it must be for them to live under our occupation, with our forces deployed in their streets and our settlers terrorizing their people and taking over their land and homes, and with millions of them under blockade. As many colonial powers before it, Israel holds its victims responsible for their own death. Israel is the victim forced to kill the Palestinians because they do not behave. If only Palestinians could coexist with their occupiers and oppressors in peace.

Some wonder why Palestine enjoys so much solidarity and support from so many nations around the world, and the reason is that these nations are informed by their own history, their own struggle for freedom, and they know oppression when they see it. The countries who sit in these United Nations would be dishonoring the memory of those who fought for freedom in their respective countries if they were to accept colonialism and Apartheid in Palestine.

Where are they those who proclaimed they had achieved peace in the Middle East by brokering agreements between countries who were actually not at war? Where are they those who proclaimed that peace in the Middle East could be achieved without the Palestinians and at their expense? Where are they those real estate agents who decided they could sell what they do not own to those who have no rightful claim. We told them then and we say now, Jerusalem is not for sale. Our roots are deep, our history long, our heritage etched in every stone, street and alley in this City.  War and peace start from Jerusalem. You want to save peace, start by saving Sheikh Jarrah. Protect Al Haram Al-Sharif from attempts to divide it temporally and spatially. Israel continues proclaiming that Jerusalem is the unified capital of Israel. Have you ever seen the city more divided?

The international consensus you have all helped shape and defend is being destroyed in front of our very eyes. The alternative that Israel chose is Apartheid. Yes Apartheid. And one day soon, even this Council will not be able to deny this reality. Act now to end the aggression and the assault on our people, our homes, and our land. Act now so freedom can prevail, not Apartheid.

As the Palestinian people mark the 73rd anniversary of the Nakba, Israel pursues the same policies of dispossession, forced displacement, discrimination and denial of Palestinian rights.