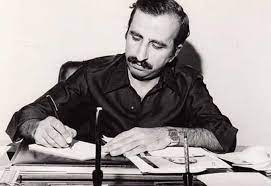 Posted By: Ebtehal Mohamedon: May 03, 2021In: Memorable Figures
Print Email

Hanna Eid Moqbel is a Palestinian journalist, writer, and Syndicate Palestinian who served as Secretary General of Arab Journalists in Cyprus.

He was born in 1939 in the village of Taybeh in Palestine, he studied and worked in Jerusalem. He belonged to Fatah movement and published the first Palestinian patrols and contributed to establishing the Palestinian Unified Media. 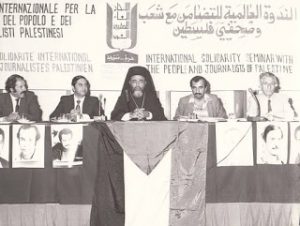 After the martyrdom of Kamal Nasser, Hanna Moqbel took over as editor-in-chief of the Palestine Revolution magazine in Beirut, which represented the mouthpiece of the Palestinian resistance in Lebanon. In 1979 he was elected Secretary General of the Union of Arab Journalists in his capacity as the representative of Palestine, and he was reelected in 1983 for another four years, and he was one of the founders of the General Union of Palestinian Writers and Journalists and held the Secretariat of the Union’s General Secretariat until 1980.

Hanna Moqbel was assassinated in Nicosia on May 3, 1984 by Intelligence agents.

A symbolic and majestic funeral was held for him in his town, al-Taybeh, and his funeral turned into a mass rally. Later on, Al-Khidr Church Street in Taybeh was named after him.

On August 4, 2015, President Mahmoud Abbas awarded him the Gold Medal of Merit and Excellence.