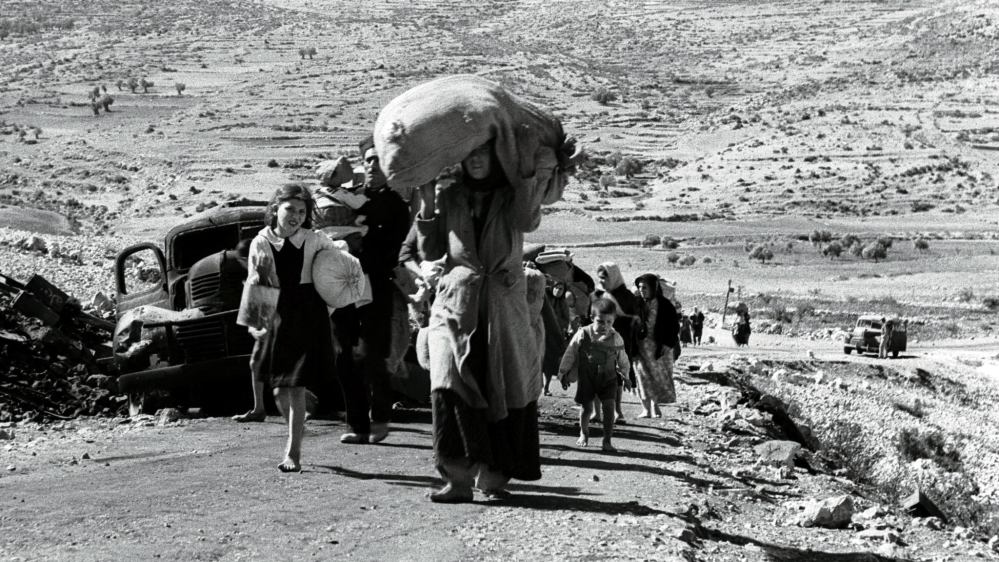 This year Palestinians mark the 73rd anniversary of the Nakba – the most traumatic catastrophe that ever befell them. The rupture of 1948 and the ‘ethnic cleansing’ of the Nakba are central to both the Palestinian society of today and Palestinian social history and collective identity.  73 years ago the name Palestine was erased from the world map, as the Zionist forces and leaders strove to occupy, depopulate and erase Palestine with the intent of replacing it with the newly established state of “Israel”.

The massacres, crimes and schemes in Palestine were natural result of the declaration of the establishment of the Zionist entity. Relying on the diplomatic and political assets provided by the UN Partition Resolution of November 1947 and on strong U.S. support, the Zionists embarked on an offensive to conquer as much land as possible beyond the recommended partition lines, to destroy and empty whole Palestinian villages and towns, and to transform most of the Palestinians into refugees.

The day of the Nakba ” the catastrophe” came and hundreds of thousands of Palestinians were displaced homes and were driven to the borders around Palestine. No one denies that this people stood up long and fought many battles. The Nakba was not a momentary event, but rather the outcome of a political project which aims to displace a people from its homeland. But politics alone was not enough to achieve this, and it was essential that Palestinian memory also be stained with blood. The 1 One of the first authors to label 1948 the Nakba was Dr Constantine Zurayk, a distinguished philosopher of Arab history and  intellectual, in his book The Meaning 124 Holy Land Studies destruction of historic Palestine and ‘ethnic cleansing’ of the Palestinians. 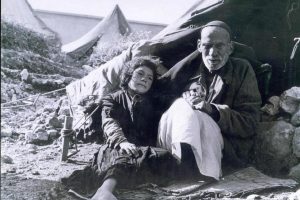 ‘’ We are not looking back to dig up the evidence of a past crime, for the Nakba is an extended present that promises to continue in the future. ‘’ (Darwish 2001)

The most disastrous consequence of the Nakba was the massive depopulation of Palestine’s Arabs. More than million  Palestinians had fled their homes or were expelled by Zionist forces, only to become refugees in Gaza, the West Bank, and surrounding Arab countries. Israel categorically refused to allow them to return. The approximately 150,000 Palestinians who stayed, a large number of whom were also internally displaced homeless refugees, were subjected to martial law in the new Zionist state.

During the Nakba, Palestinians fled to Lebanon. The majority was from the northern part of Palestine; the villages of the Galilee ”al-Jalīl”; and the coastal cities of Jaffa ” Yafa”, Haifa, and Acre ”Akkā”. Their integration into Lebanese society was dependent on their religious community and class. Middle and upper class Palestinians settled in towns and cities.

The condition of the refugees is the same in every place one of hardship and misery. many of refugees are living in open with no shelter from heat or cold.  The refugees rejected every project that might even indirectly aim at the settlement of refugees outside their country, and their demand to return to their former homes. 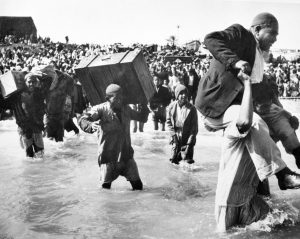 Syria received the first wave of Palestinian refugees after the Palestinian Nakba in 1948; they were from the city of Safad; about 22 percent from Haifa; about 16 percent from Tiberias ”Ṭabariyyā”; and the rest, in varying proportions, from the cities of Acre ”Akkā”, Nazareth ”Naṣrath”, Jaffa ” Yafa”, and Baysan. Palestinians fled to Jordan, Egypt, Iraq, Gaza Strip and many other countries, they scattered in several camps around the borders of Palestine.

For the Arabs, it was a day of bitter humiliation and of determination to reclaim the soil of Palestine. The international rulers coined liberation slogans,  they gave the Palestinians endless promises that the time would come very soon when they bring them -the Palestinian refugees- back to their homes and lands.

Ilan Pappé  the expatriate Israeli historian and socialist activist in The Ethnic Cleansing of Palestine brilliantly deploys the notion of ‘memoricide’, which Pappé defines in terms of the leifmotif of his book, the execution of Ben-Gurion’s ‘master plan of expulsion and destruction’ and then replacement, of de-Arabisation and Judaisation; memoricide is the ‘erasure of the history of one people in order to write that of another people’s over it’, the continuous imposition of a Zionist layer and national pattern over everything that had been Palestinian (Pappé 2006: 231).

In the Palestinian case, oral history is an indispensable tool in revealing unexplored aspects of the Nakba. Memory is an essential concept in Palestinian history, because as Palestinians recollect what is taking place in the present, they begin to realize the significance of reconstructing their past. Since many chapters remain missing, or dislocated, from their story, memory plays a crucial role in filling in the pages of the Palestinian story.

History was made and written based on documenting the oral testimonies of those who witnessed a historic event, and until today history is being told in the form of stories which grabs children’s attention regarding their past.

The following interviews from a study of Berzeit University by Zarefa Ali, highlight collective and individual memories which construct the Palestinian narrative.

This interview was conducted with Imm Hamed on February 1, 2012 in Ramallah.  During the Israeli attack on the Lydd in July 1948, dozens of unarmed detainees in the Dahmaimash mosque were shot and killed. “Apparently, some of them tried to break out and escape, perhaps fearing that they would be massacred. IDF troops threw grenades apparently fired PIAT(bazooka) rockets into the compound.  “it was a very powerful massacre.” And when I asked her whether she had witnessed this massacre, she replied “Wila” of course (while crying). She describes her journey of exodus as follows: We fled because they attacked us in our homes…..They told us to go to the field where we use to collect the wheat. They kicked us out of our homes and kept us outside until noon…..The Nakba which the people of the Lydd experienced, no one in the world had experienced ….Why did we leave our country? Because of the horror they did in Deir Yassin…When people told us to leave, we simply left because we didn’t want what happened in Deir Yassin to happen to us. I was married and had a boy and a girl. We walked until we reached Ramallah…While we were walking, a Jewish soldier approached my uncle, who was carrying 2000JDs, and asked him: Where did you get this money from? They took the money and shot him. I then called for my mother to be careful! They killed my uncle. I thought she fainted, it didn’t occur to me she was dead. ….Yumma Yumma [mother she cried], she didn’t wake up she was gone…. We were all dispersed and anyone who fell was left to die ”

Another first generation refugee who is also from the Lydd, Zaina. Zaina recollected the story of her exodus as follows:

” We were returning from our field, we had just filled two carriages with watermelons, and someone told us are you crazy! Go home our village has fallen. When the Jews attacked Lydd I was 18 years old, married and my eldest son Al-Abed was one years old…. It was Ramadan, and we were fasting for three days. …They started shooting towards us, and my brother in-laws son was killed in front of our house, he was seven years old. My youngest brother in-law was 16 years old….. He ran towards a hill; however they were able to capture him and shot him near Al-Nabi Moqdan.…… When the Jews arrived I was just about to bake some bread, but when the Jews attacked us they said yallah [come on] get out of here. Where am I supposed to go? If we leave what are we suppose to eat! People were poor.…When we left to Na’leen we became beggars for bread. We had nothing with us………I shouldn’t have left, if I stayed on my land it would had been better for me. ”

In her life story, Imm Najih narrates the fall of Haifa and the story of her dispossession as follows:

” My father was dead, my brother left to Jordan. I was 10 years old. They took one of the most beautiful lands….. People left and were dispersed due to heavy bombardment and explosives by the Zionist forces. Men were killed, houses destroyed…Nothing is left… Yet those who remained profited, they were not stigmatized as refugees. When we migrated to Nablus, they treated us passively. ” 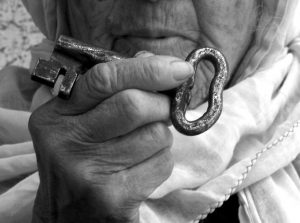 Interviewer said that As first generation refugees narrated their stories and memory of the Nakba, they not only provided me  with historically significant facts of the events of 1948, but also gave me their perception of the past, present and future. Through recollecting the memory of their continuing past, first generation refugees presented different indicators of a continuing narrative. Moreover, the attempt of appealing to the past and understanding it from a present day perspective reveals how during the Nakba Palestinians who left their homes thought it was only for a short period of time. Today they articulate how ignorant they were for leaving their homes. For instance, Zaina emphasized that when they left “We thought it was a matter of days, a month at the latest and we would return. Yet the matter has prolonged.” All of the first generation refugees I interviewed said that the moment they left their homes, they thought it was temporary. It never occurred to them that they wouldn’t return. As Fatima noted, “When we left we didn’t even take our house keys with us. We were hoping to return, but hope of return was, and remains, little.”

The United Nations promised Palestinian refugees in many resolutions “the free choice” of repatriation or compensation, but only supplied them with “some flour, oil and second-hand clothing.

The impact of the 1948 Nakba was severe on the Palestinian people and their future, where the Nakba and its repercussions led to deterioration in the content of the Palestinian entity on several levels. From 1948 onward, the life of the Palestinian refugees has been hard and full of bitter disappointments. The Palestinians did not succeed in their efforts to stop Zionism.