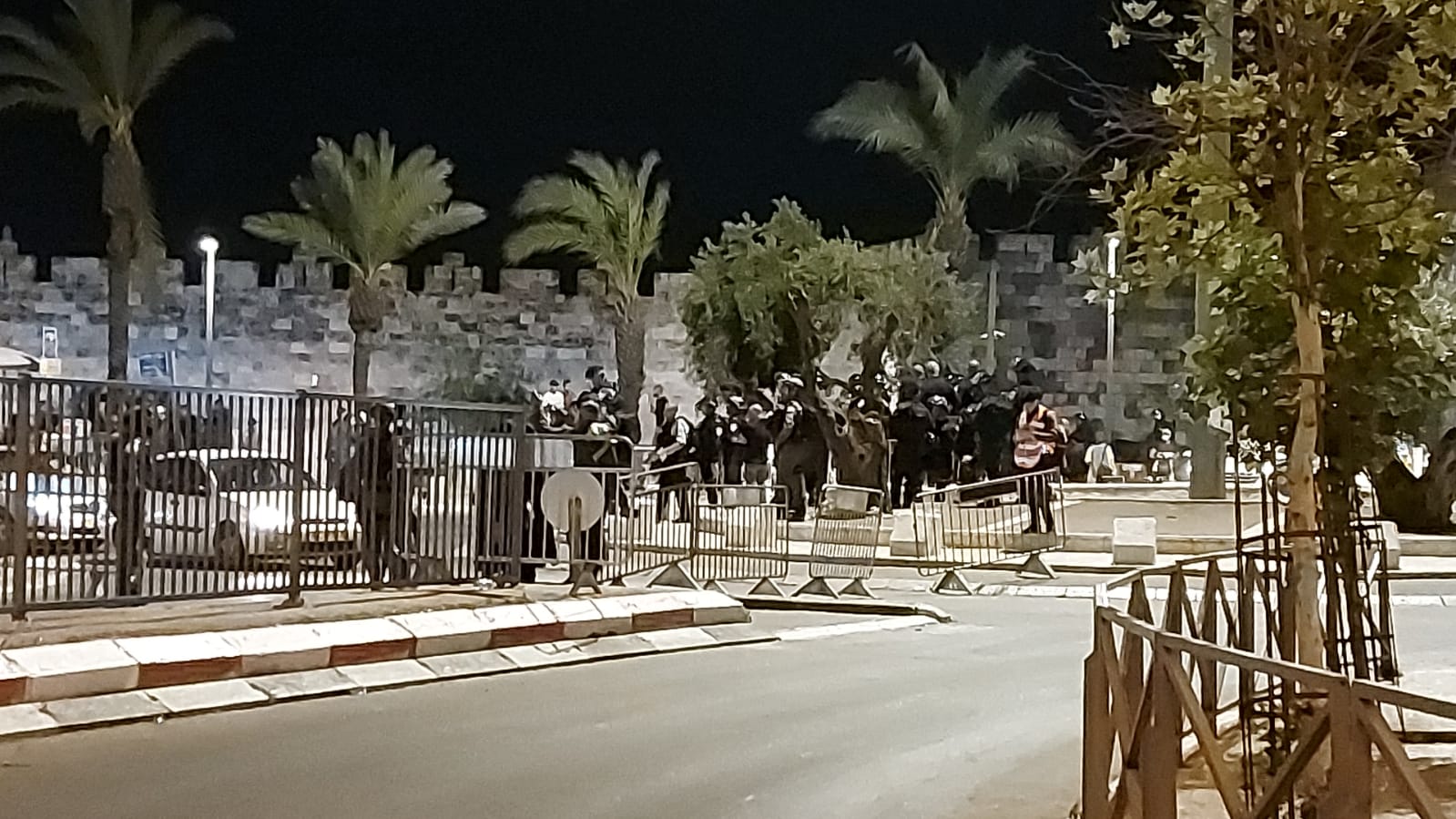 The Jerusalem uprising rages as Palestinians take to the streets to protest Israeli police, settlers’ provocations

The Jerusalem uprising, as it has been dubbed (in Arabic intifadat al-Quds), raged last night in occupied Jerusalem for the 11th night in a row in protest against Israeli police and settlers’ provocations and assaults on the city’s Palestinian residents, and expanded to reach the West Bank and Gaza Strip.

The Palestinian Red Crescent said it treated 20 people injured in the clashes with police in and around the old city of Jerusalem, four of them were transferred to hospitals in the city while the rest were treated at the location.

It also treated 13 injuries from last night’s clashes with Israeli soldiers at Qalandia checkpoint, north of Jerusalem, and at the DCO checkpoint, north of Ramallah, two of them were taken to hospitals. The clashes broke out last night in support of the Jerusalem uprising and against Israeli treatment of the Palestinians in the holy city.

Meanwhile in the Gaza Strip, three people were injured from Israeli army gunfire as people gathered at the northern border fence with Israel to protest the Israeli actions in occupied East Jerusalem.

The Jerusalem uprising started with the advent of the holy Muslim fast month of Ramadan, today in its 12th day, when on the first day of Ramadan Israeli police cut off wires to loudspeakers at Al-Aqsa Mosque minarets in Jerusalem to prevent the call for prayer that alert people to the start and end of the fast as well as the time for prayers.

Then on that first night, and every night after, police harassed Jerusalem residents leaving Al-Aqsa Mosque, a main worship destination for devout Muslims during the month of Ramadan, following the night prayers and who usually gather at Jerusalem’s old city Damascus Gate plaza to celebrate Ramadan nights.

Police not only harassed but also attacked and forced the hundreds of people who gathered at the plaza to leave the area, often leaving many injuries and people detained by police.

But this did not deter the Palestinians from continuing to gather at Damascus Gate after each night prayer since the start of Ramadan on April 13 when some 70,000 people take part in the worship every night, and police continued to attack the people and close the area with metal barricades in an effort to prevent people from hanging around Damascus Gate, one of the main gates to the old city of Jerusalem.

The daily police attacks reached a climax two nights ago with also fascist Israeli members of the Lahava terror group that advocates killing Palestinians in Jerusalem and taking over their homes joined the police in attacking the city’s Palestinian residents.

The Israelis, mainly hardcore racist settlers, converged in the hundreds on Damascus Gate to confront the Palestinians.

While police prevented the settlers from reaching Damascus Gate to prevent to pogrom in the city and outbreak of violent clashes, they allowed the settlers free hand and even to set up checkpoints along police lines in other neighborhoods of occupied East Jerusalem, such as Sheikh Jarrah and al-Tur, where settlers joined the police in harassing and attacking the city’s Palestinian residents.

Settlers last night and early this morning attacked Palestinian homes and property in Sheikh Jarrah neighborhood, throwing rocks and Molotov cocktails at homes and cars. One Palestinian woman was injured in the head when settlers threw rocks at a car she was in last night.

Earlier yesterday, police attacked and dispersed a weekly protest that takes place at the neighborhood against Israeli plans to force-evict dozens of Palestinian families from their homes in order to turn them over to the settlers under the pretext the property was once owned by Jews.

As the Jerusalem uprising raged and Israeli police crackdown intensified, Palestinians in the West Bank and the Gaza Strip took to the streets in support of their brothers in the occupied holy city.

Palestinians attacked last night Israeli soldiers at Qalandia and the DCO checkpoints, and protests were also reported in other West Bank cities, such as Tulkarm in the north and Bethlehem in the south. Palestinians also rallied in the centers of the cities in support of Jerusalem.

In Gaza, dozens of Palestinians gathered at the border in the north of the Gaza Strip where they clashed with Israeli soldiers across the border. The soldiers opened fire at the Palestinians injuring three people.

People in the Gaza Strip also demonstrated in the cities against Israeli actions in occupied Jerusalem, and several projectiles were fired from Gaza last night and fell in southern Israel without causing any injury of damage.

Tension was high in occupied East Jerusalem even before the start of the fast month of Ramadan as Israeli police prevented Palestinians in the city from holding any activity related to the Palestinian legislative elections planned for May 22, in which more than 60 people of the city’s residents are running as candidates.

Israel so far has not said that it will allow Palestinians to vote in the city, a must for holding the elections on time.

At the same time, Israeli police has facilitated intrusions by Jewish fanatics into Al-Aqsa Mosque compound during the daily visit hours, while allowing them to hold rituals in violation of the status quo and the sanctity of the holy site as a Muslim-only worship area, provoking strong reaction from people and countries, such as Jordan, the official custodian over the Muslim and Christian holy places in occupied East Jerusalem.