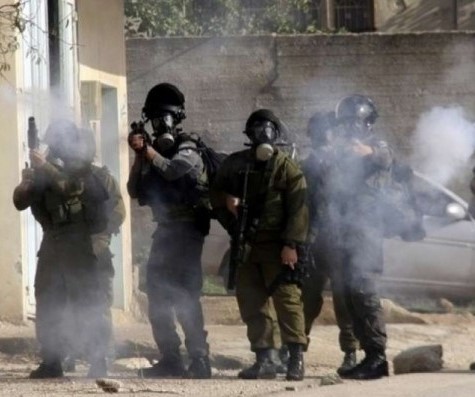 They confirmed that the Israeli army sealed off the village purportedly as part of an active pursuit of the perpetrators of a stone-throwing attack near the village.

An Israeli female settler was seriously injured after being pelted with stones as she was driving past the entrance of the village and near the Israeli colonial settlement of Neve Tzuf, also known as Halamish.

Israeli forces Sunday evening heavily deployed in and around the village, launching a massive house-to-house search campaign and detaining 20 villagers on suspicion of being involved in the attack and assaulting others.

Soldiers and intelligence officers set up a tent at the entrance of the village, where they interrogated dozens villagers, and conducted field investigations in the streets of the village.

Security sources confirmed that 16 of the detainees were released last night, while the four others remain in detention.

Following the stone-throwing incident, Israeli military bulldozers destroyed a swimming pool belonging to the villagers on the side of the bypass Road 465, which was constructed at the expense of the villagers’ lands.

Located 14 kilometers to the northwest of Ramallah city, Deit Nidham, also written as Deit Nizzam, has a population of some 1,000 and occupies a total area of 2,758 dunams.

Under the Oslo Accords, an agreement made 25 years ago that was supposed to last just five years towards a self-governing country alongside Israel, the Palestinian Authority was given limited control over a very small pocket of 130 donums, classified as Area B and accounting for 4.7 percent of the village land.  In contrast, Israel maintains control over the remainder, classified as Area C.