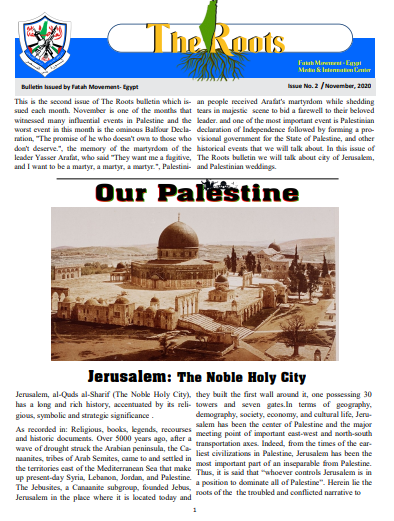 The Roots Bulletin (Issue No.2)

This is the second issue of The Roots bulletin which issued each month. November is one of the months that
witnessed many influential events in Palestine and the worst event in this month is the ominous Balfour Declaration, “The promise of he who doesn’t own to those who don’t deserve.”, the memory of the martyrdom of the leader Yasser Arafat, who said “They want me a fugitive, and I want to be a martyr, a martyr, a martyr.”, Palestinian people received Arafat’s martyrdom while shedding tears in majestic scene to bid a farewell to their beloved leader. and one of the most important event is Palestinian declaration of Independence followed by forming a provisional government for the State of Palestine, and other historical events that we will talk about. In this issue of The Roots bulletin we will talk about city of Jerusalem, and Palestinian weddings.