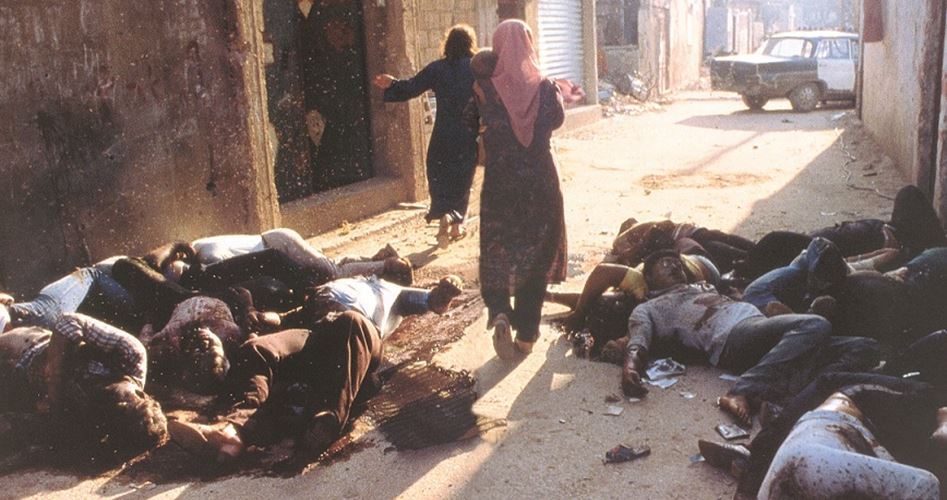 Remembering the Sabra and Shatila massacre 35 years on

Thirty-seven years ago, one of the bloodiest chapters in Palestinian history unfolded in a refugee camp in Lebanon. Surrounded by Israeli forces from all sides, thousands of refugees, bereft of leadership and protection from the international community, were slaughtered during a two day killing spree in the Shatila refugee camp and the adjacent Sabra neighbourhood of Beirut by the Christian Phalangist militia, Israel’s paramilitary ally in Lebanon. 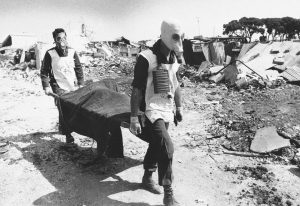 On September 16, 1982, shortly after Israeli troops seized control of West Beirut, the right-wing Lebanese Phalange forces operating under the direction of Israeli forces massacred, wounded, and left homeless thousands of defenseless men, women, and children in the Sabra and Shatila Palestinian refugee camps. The widespread massacre was carried out methodically over the course of two days until 8:00 A.M. on September 18.

Israeli forces who had invaded Lebanon three months earlier, advanced into Beirut and surrounded the Palestinian refugee camp of Shatila. A tenuous ceasefire agreement had already been brokered by the US to allow the leadership of the Palestine Liberation Organisation (PLO) along with more than 14,000 fighters to leave the country, which was ravaged by a civil war. UN Security Council Resolution 520 dated 17 September was passed unanimously and condemned “the recent Israeli incursions into Beirut in violation of the cease-fire agreements and of Security Council resolutions.” Israel ignored this resolution too.

Virtually sealed off from the outside world by Israeli tanks, hundreds of Phalangist fighters — a Christian militia group inspired by European fascists — were instructed by Israeli forces to clear out PLO members from the area. What unfolded over the following day and half horrified the world.

The Phalange were archenemies of the PLO. They fought on opposite sides in the Lebanese civil war which resulted in 120,000 deaths. They also wanted to avenge the death of the newly-elected President of Lebanon, Bachir Gemayel. The Phalangists believed that Palestinians had assassinated Gemayel on 14 September — an allegation that turned out to be completely false — which proved to be fatal for the Palestinians. 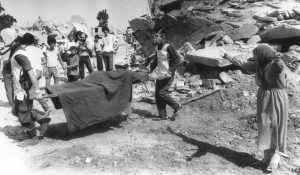 In the 38 hours that the Israelis allowed the Phalange militia to enter the refugee camp unhindered, the Palestinians bunkered in their makeshift shelters suffered unspeakable horrors. Israel’s proxy militiamen raped, tortured, mutilated and killed more than 3,000 Palestinian and Lebanese residents of Sabra and Shatila. Assisted by bright flares fired into the night sky by Israeli troops based in the sports stadium overlooking the area, the killing went on without pause. Despite eyewitnesses reporting the horrors that were taking place, the Israeli military allowed reinforcements to enter Shatila and are even said to have provided the Phalangists with bulldozers to bury the corpses of dead Palestinians.

Determined to destroy the PLO base in Lebanon and install a puppet regime in Beirut, Israel’s then Defense Minister, Ariel Sharon, turned a blind eye to what was going on. On 17 September, details of the massacre are said to have been communicated to him, but the man who would later become the Prime Minister of Israel was unmoved, allowing the killing to continue for several more hours.

Shock and outrage followed. The UN Security Council passed Resolution 521 unanimously, condemning the massacre. On 16 December 1982, the UN General Assembly declared the massacre to be an “act of genocide”.

Israel launched an investigation of its own on 28 September 1982 with the Kahan Commission of Inquiry. It concluded that “direct responsibility” rested with the Phalangists, and that no Israelis were deemed “directly responsible”, although Israel was held to be “indirectly responsible”. Defense minister Ariel Sharon, however, was found to bear “personal responsibility” for “ignoring the danger of bloodshed and revenge” and “not taking appropriate measures to prevent bloodshed.” He was dismissed from his position but that did little to damage his political career and he became Israel’s Prime Minister in 2001.

Pictures of the aftermath of the massacre show the bloated bodies of men and women piled on top of one another against walls, and the bloodied corpses of children lying face down in rubble.

For the Palestinians, the tragedy of Sabra and Shatila remains as a powerful reminder of their apparently endless cycle of displacement. It was yet another consequence of the ethnic cleansing of Palestine in the 1948 Nakba and again in 1967. Around half a million Palestinian refugees are still dehumanized and insecure in their predicament in Lebanon, with few civil and political rights. They are among 5.4 million scattered across the region in squalid refugee camps which now have a disturbing sense of permanence. 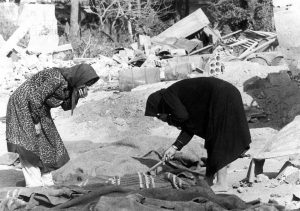