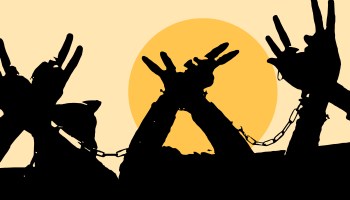 As Israel’s annexation move is looming and amidst the coronavirus outbreak, Israeli forces Thursday overnight detained at least 24 Palestinians from various parts of the West Bank, said the Palestine Prisoner’s Society.

The Palestine Prisoner’s Society (PPS) confirmed in a press release that Israeli police rounded up 11 Palestinians from Jerusalem district.

The detainees were identified as residents of al-Tur, Silwan and Beit Hanina neighborhoods.

In Ramallah and al-Bireh, PPS said that Israeli soldiers detained two Palestinians after ransacking their houses in al-Tireh neighborhood, west of Ramallah city.

One of the two detainees was identified as Haneen Nassar, a Palestinian political prisoners campaigner and the wife of imprisoned Rami Fadayel, and the other as an undergraduate student of Birzeit University.

PPS also confirmed two other overnight raids in al-Jalazone refugee camp and Birzeit town, north of Ramallah, resulting in the detention of the two others, including a former prisoner.

In the northern West Bank, PPS confirmed that five Palestinians were rounded up in multiple raids across Nablus district.

In Tulkarem district, soldiers conducted a raid in Dhannaba neighborhood, resulting in the detention of a former prisoner.

They also barged their way into Ezbet al-Jarad village, east of the city, resulting in the detention of another.

Israeli forces frequently raid Palestinian houses almost on a daily basis across the West Bank on the pretext of searching for “wanted” Palestinians, triggering clashes with residents.

These raids, which take place also in areas under the full control of the Palestinian Authority, are conducted with no need for a search warrant, whenever and wherever the military chooses in keeping with its sweeping arbitrary powers.

According to Palestinian figures, roughly 5,700 Palestinians — including numerous women and children — are currently languishing in Israeli detention facilities.

Under Israeli military law army commanders have full executive, legislative and judicial authority over 3 million Palestinians living in the West Bank. Palestinians have no say in how this authority is exercised.