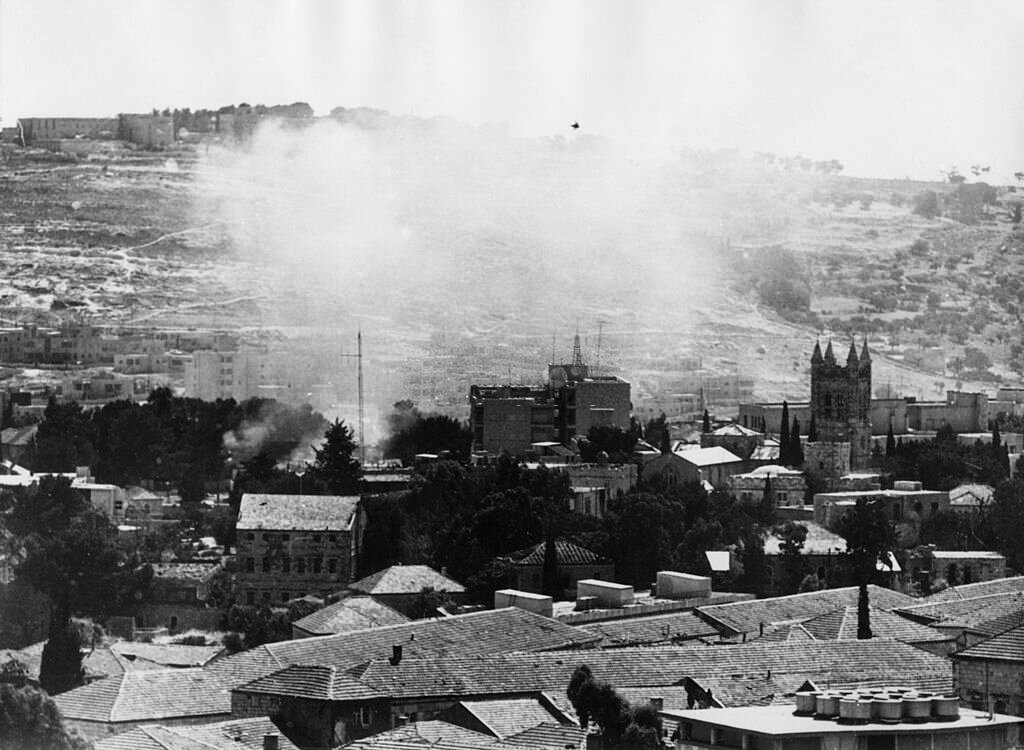 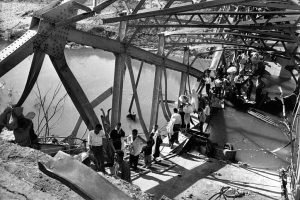 Palestinian refugees crossing the remains of the Allenby bridge over the river Jordan, blown up to prevent Israeli pursuit during 1967 war.

In June 1967, the third Arab-Israeli war broke out, at the end of which Israel occupied the Sinai, the Syrian Golan Heights, the Gaza Strip, and the West Bank. Dubbed the Six-Day War by Israelis because in six days they were able to achieve an overwhelming victory over the armed forces of Egypt, Syria, and Jordan, it became known in the Arab world as al-naksa, the “setback.” This setback came on both a Palestinian level, as the remainder of the lands of historic Palestine came under Israeli military rule.

The Egyptian government announced on 15 May that it was placing its armed forces on alert. On the same day, Egypt requested that the UN Emergency Force—established following the 1956 war—withdraw from Sharm al-Shaykh and Gaza. On 22 May, it announced that the Straits of Tiran (at the Gulf of Aqaba’s entrance to the Red Sea) would be closed to Israeli shipping. 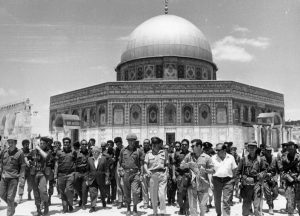 Israeli soldiers past the ‘ Dome of the rock’ on the temple mount, on a victory tour after the war.

On 30 May, Jordan, having ascertained that war was imminent, joined the mutual defense treaty between Egypt and Syria. Meanwhile, Israel announced the formation of a national unity government that included, for the first time, Menachem Begin, head of the right-wing Herut Party.
Occupation of the West Bank led to widespread displacement of the population there, especially from Palestinian refugee in the Jordan Valley. Palestinians in the Gaza Strip attempted to flee toward the West Bank and from there to Jordan, while in the Golan Heights, Israeli forces expelled the majority of the Syrian residents.
This war was the third war in the Arab-Israeli conflict.
As a result, Israel occupied the Sinai Peninsula, the Gaza Strip, the West Bank, and the Golan Heights.
The 1967 war lead to UN Security Council Resolution 242. Approved in November 1967, , the 1967 Arab League summit in Khartoum, the displacement of most of the inhabitants of the Suez Canal cities, the civilians of the Quneitra governorate in Syria, and dozens Thousands of Palestinian people from the West Bank, wiping out entire villages, and opening the door for settlement in Jerusalem and the West Bank.
The June 1967 war had provided Israel an opportunity to realize its goals of regional expansion. Moreover, the defeat of the Arab regular armies in 1967 led to the proliferation of Palestinian fedayeen operations. 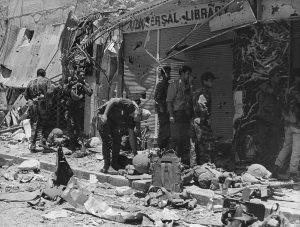 Among the most important repercussions of the 1967 war was the war of attrition, the war of 1973, and the modern Palestinian revolution. The defeat of 1967 were followed by victories.

The War of Attrition was from mid-1968 and until August 1970. Following the 1967 War, no serious diplomatic efforts tried to resolve the issues at the heart of the Arab–Israeli conflict. Egyptian President Gamal Abdel Nasser believed that only military initiative would compel Israel or the international community to facilitate a full Israeli withdrawal from Sinai, and hostilities soon resumed along the Suez Canal.

By 1969, the Egyptian Army judged itself prepared for larger-scale operations. On March 8, 1969, Nasser proclaimed the official launch of the War of Attrition, characterized by large-scale shelling along the Suez Canal, extensive aerial warfare and commando raids. Hostilities continued until August 1970 and ended with a ceasefire, the frontiers remaining the same as when the war began, with no real commitment to serious peace negotiations.

In 1973, Egyptian and Syrian military planners chose it as the perfect moment for a combined surprise attack on the Jewish state – the war changed the world and we all live with its effects to this day.

The Arab attacks were an effort to reverse the defeats of 1967 in which Israel had redrawn the map of the Middle East.

By the end of the 1973 war, Israel suffered the loss of at least 2,800 soldiers, while around 8,800 soldiers were wounded and some 293 others were held captive. Approximately 400 Israeli tanks were destroyed in addition to 102 airplanes.