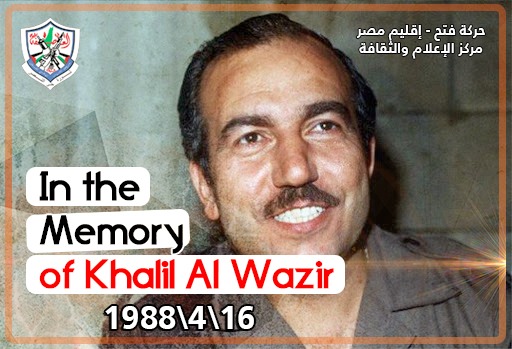 In The Memory of Khalil Al Wazir (Abu Jihad)

Posted By: Ebtehal Mohamedon: April 16, 2020In: News, on this day
Print Email

Khalil al-Wazir was born on 10 October 1935, in the town of Ramla, Palestine. He was forced to leave his hometown in July 1948 when Zionist militias occupied Ramla and evicted its inhabitants. He and his family made their way to Ramallah and Hebron before settling in Gaza.

His parents, Ibrahim Mahmud al-Wazir and Fawziyya Khalil Shaikhu, had four sons (Ghalib, Munzir, Zuhair, and Khalil) and three daughters  (Zahira, Nabila, and Zainab). Khalil and his wife, Intisar Mustafa Mahmud al-Wazir (who was also his cousin), had three sons, Jihad, Basim and Nidal, and two daughters, Iman and Hanan.

He attended an UNRWA elementary school in Gaza and graduated from Palestine School in 1954.

His Life as an Activist

In 1952, his colleagues during that period were Kamal Adwan, Abu Yusuf al-Najjar, Said al-Muzayyan, Abd al-Fattah al-Hamud, Ghalib al-Wazir, Abdallah Siyam, Muhammad al-Ifranji and Hamad al-Aidi.  When Israeli forces attacked the Gaza Strip on 28 February 1955, in retaliation for the Zohar operation, killing and wounding many Egyptians and Palestinians. In response, al-Wazir helped to lead a mass demonstration, which started from the Palestine Secondary School in Gaza. Demonstrators carried signs that read “Enlist us in the army and save us” and “Train us and you will help us” in addition to slogans that rejected the scheme to resettle Palestinian refugees in the Sinai Peninsula. 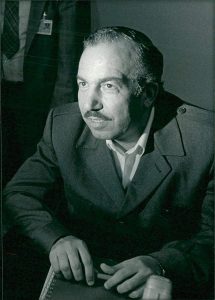 During the attack on Gaza in the autumn of 1956, he left the university and joined a training camp set up by the League of Palestinian Students in Egypt; there he met Yasir Arafat. By the following year, the two men (who were then in Kuwait) had agreed to establish a secret organization with the aim of liberating Palestine. In November 1958, the two men met with many young Palestinians in Kuwait who had arrived from several Arab countries. At that meeting the Movement for the National Liberation of Palestine (Fatah) was established. Al-Wazir was chosen as a member of the first central committee of the movement and continued to be a committee member until his assassination.

In October 1959, he edited a periodical called “Call of Life-Our Palestine” published in Beirut, which came to reflect the views of Fatah.

In November 1963, he moved to Algeria and (in his capacity as a Fatah member) opened the first Palestine bureau in Algeria and began to organize military training tours for Palestinian volunteers in the Algerian Military Academy. He also edited two periodicals: “The Cry of Palestine” and “News of Our Palestine.”

In March 1964, he travelled to China with Yasir Arafat. China’s leaders allowed them to open an office for Palestine in the capital, Peking, and agreed to support the Palestinian revolution as soon as it began. He then went on to North Vietnam and North Korea and later visited Yugoslavia and the German Democratic Republic.

Khalil al-Wazir took part in the Palestinian National Council held in Jerusalem at the end of May 1964, at which the establishment of the Palestine Liberation Organization (PLO) was announced. He was a member of the political committee of that council.

In 1965 he left Algeria for Damascus where he set up a military headquarters and was made responsible for contacts with Fida’ei cells inside Palestine, especially after al-Asifa (the military wing of Fatah), carried out the first symbolic operation in occupied Palestine on the night of 31 December 1964. This took place in a water-course called the Ilbun tunnel, where an Israeli water network was blown up; two Israeli soldiers were injured and one of the men who carried out the attack, Ahmad Musa, was killed.

When Israel attacked Egypt, Syria, and Jordan in June 1967 (and in the process occupying east Jerusalem, the West Bank, the Gaza Strip, the Golan Heights, and the Sinai Peninsula), Khalil al-Wazir organized several military operations against the Israeli forces in the Upper Galilee, in northern Palestine.

Following the violent clashes between the Palestinian  Fidaei and the Jordanian army in September 1970, which resulted in the departure of the PLO forces from Jordan, al-Wazir and his colleagues moved to Lebanon, where he spent his time in Beirut and Damascus.

After assuming control of Fatah’s organization and then media activities, he became a member of the general command of al-Asifa; later he supervised Fatah activities inside the occupied territories (referred to as the Western Sector), taking that responsibility after the assassination of Kamal Adwan, the person in charge of that sector, at the hands of an Israeli military group which infiltrated into Beirut in April 1973.

At the fourth congress of Fatah, held in Damascus in May 1980, Khalil al-Wazir was elected deputy to the commander in chief, Yasir Arafat. He played a leading role in resisting the Israeli invasion of Lebanon in the summer of 1982 and in the steadfast resistance put up by the joint Palestinian-Lebanese forces in Beirut when the capital was besieged by Israeli forces. 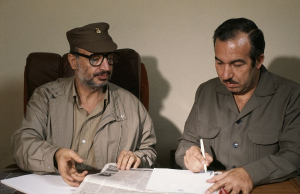 After the departure of the PLO forces from Lebanon, al-Wazir moved with Yasir Arafat to Tunis and was then appointed, in 1984, head of the Palestinian delegation in the joint Palestinian-Jordanian Committee to fortify resistance inside the occupied territories. He worked to support the institutions of civil society and to build up the organization; he was behind the establishment in the occupied territories of the Youth student movement and the Women’s Committees for Social Work as well as the labor unions. He supported the resistance of Palestinians in all walks of life.

Khalil al-Wazir was one of the principal architects of the first popular intifada, which broke out in December 1987. He took part in leading it and in supporting it right until the time of his martyrdom.

An Israeli military unit called Sayeret Matkal, led by Major Moshe Yaalon (who later became chief of staff and then Minister of Defence) assassinated him in his house in the Sidi Bou Said neighborhood in Tunis, on 16 April 1988.

His body was taken to Damascus where tens of thousands of Palestinians and Syrians walked in his funeral. He was buried in the Martyrs Cemetery of the Yarmuk refugee camp. 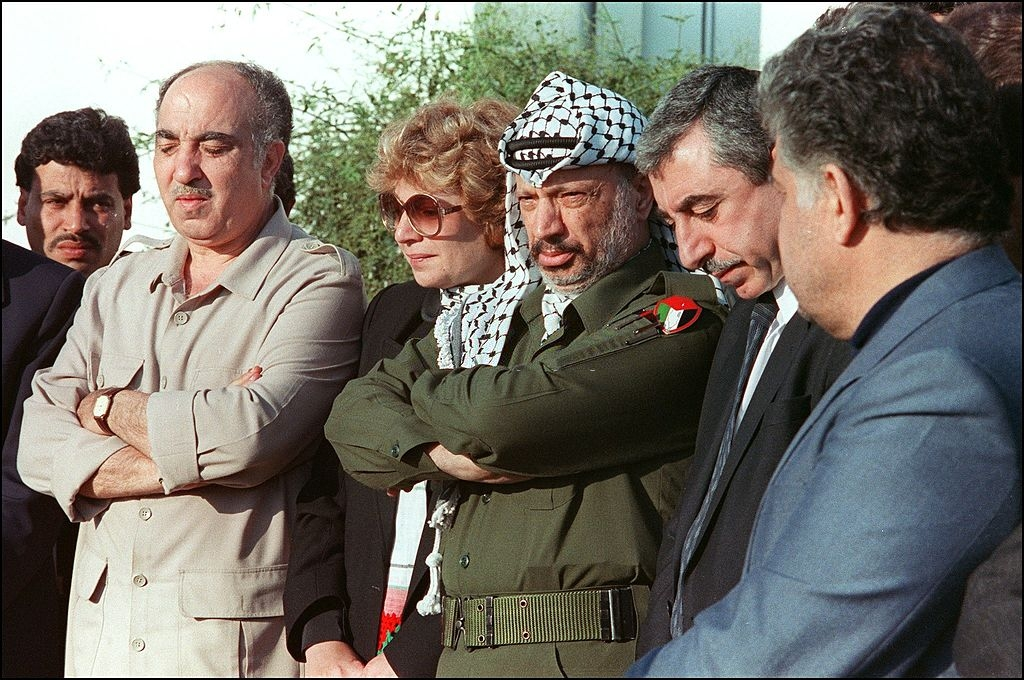 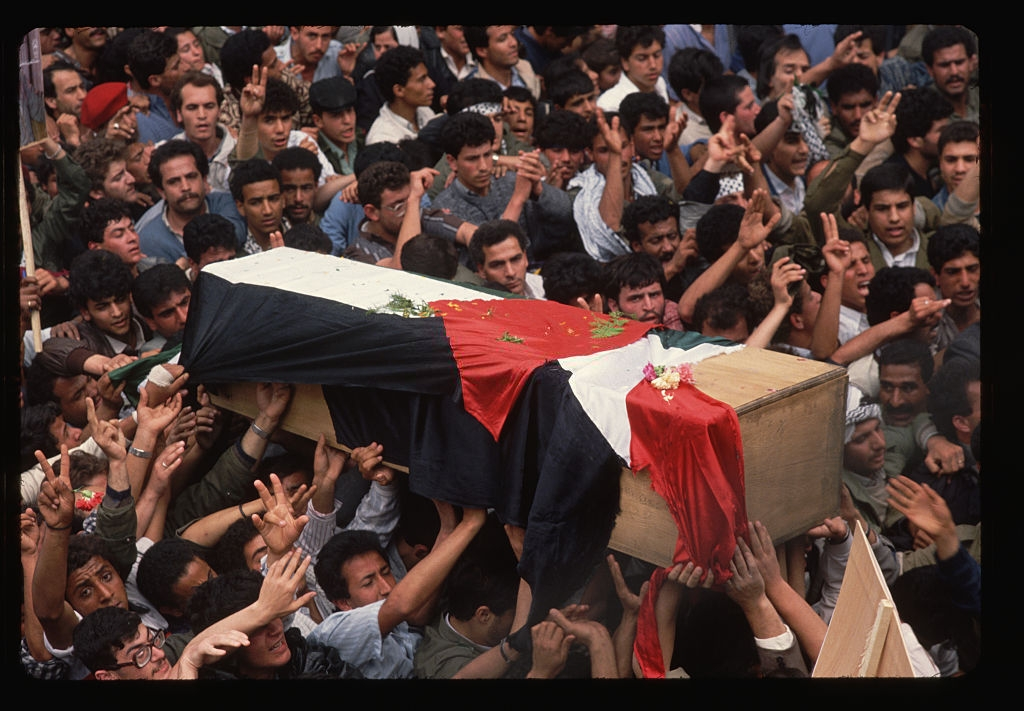 The Funeral of Abu Jihad