BREAKING NEWS
Home Fateh in Egypt Dr. Ghareeb Meets with the Cadres of the Movement in Egypt

Dr. Ghareeb Meets with the Cadres of the Movement in Egypt

Dr. Muhammed Ghareeb Secretary-General of Fatah movement in Egypt met with cadres of Fatah in Egypt after his participation in the workshop for the secretaries of Fatah’s Regions in the Arab countries in Beirut.

Dr. Ghareeb emphasized that the main objective of the workshop is the communication between the movement’s regions, and how to confront the risks threatening the Palestinian cause, especially the “Deal of the Century”, and the importance of aligning behind the legitimate leadership of the Palestine Liberation Organization and Fatah movement led by President Mahmoud Abbas in facing risks and challenges.

Dr. Ghareeb conveyed the suffering of our people in diaspora camps in Lebanon and the situation of the camps, and the hope and determination of our people in Lebanon to realize the dream of return and the establishment of an independent Palestinian state with Jerusalem as its capital. 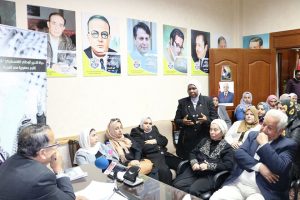