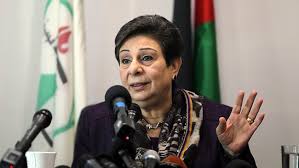 Hanan Ashrawi, member of the Executive Committee of the Palestine Liberation Organization (PLO), condemned today the recent nightly raids and detentions of elected officials and political leaders and representatives in West Bank cities.

“We strongly condemn the overnight raids of Ramallah, Bethlehem and other Palestinian cities by Israeli occupation forces and their targeted detention of several activists, including elected representative and political leader Khalida Jarar,” Ashrawi said in a statement.

“These overnight raids are meant to terrorize and intimidate the entire Palestinian people while the abduction of activists, writers, and representatives is nothing short of illegal abductions,” she added.

This is the third time Israeli occupation forces detain representative Khalida Jarar, who is also a prominent human rights defender, from her home. She was held for months as an administrative detainee in both prior incidents.

The statement added: “We call on the international community to assume its responsibilities and put an end to Israel’s illegal policy of mass arbitrary detention of Palestinian citizens. Equally, we call for unequivocal international condemnation of Israel’s illegal use of administrative detention, which has allowed the occupation authorities to detain at least fifty-four thousand Palestinian men, women, and children since the beginning of the 1967 occupation.”

“In this regard, we also reaffirm our solidarity with and concern for administrative detainees on hunger strike to protest their illegal detention, including 24 year-old Hiba Al-Labady, whose health has seriously deteriorated after 38 days of protest hunger strike. Hiba and all administrative detainees must be released immediately. This illegal and cruel practice must end,” Ashrawi concluded.