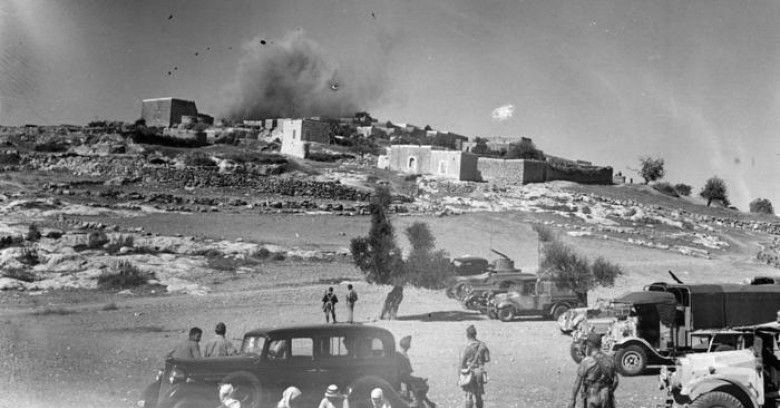 On this day in 1948, a couple of hundred armed Zionist militias from the pre-Israeli-state Irgun and Stern gangs walked into the village of Deir Yassin, a few kilometers to the west of Jerusalem, and committed one of the earlier massacres that became standard practice for the newly-founded state of Israel.

Deir Yassin was a peaceful village whose less than 1,000 residents lived quite a relaxed life, with a degree of economic prosperity. The village was famous for its limestone cutting business. But all that peaceful life turned upside down after the massacre, in which 250 and 350 local Palestinian residents were massacred. The majority of the victims of the massacre were women, children and the elderly.

After being taken prisoner, many villagers were paraded through Jerusalem’s Old City by the militias in order to widely publicize their “victory” in Deir Yassin. In several other Palestinian villages, Nakba survivors reportedly fled after hearing about the massacre in Deir Yassin, fearing similar violence.

Others who survived, fearful and terrified, left their homes and properties to seek shelter elsewhere. They became just another number in the still ongoing uprooting of Palestinians from their homes. No one has ever been held accountable for the Deir Yassin massacre.

Zionist propaganda even tried to dispute the fact that the massacre of Deir Yassin ever took place. However, that painful and shameful fact is now beyond any historical doubt, just like other infamous world massacres, such as the My Lai massacre committed by the US military in South Vietnam in 1968.

Daniel A. McGowan, a Jewish journalist in Jerusalem, who witnessed the massacre unfolding, has written that all reports about the massacre were “direct, fresh and convincing”. However, many extremist Zionists “still refuse to believe it.”

Nathan Friedman-Yellin, a criminal himself, found the Deir Yassin massacre to be “inhuman.” He was a joint commander of the Jewish Stern Gang in 1948, yet he could not swallow his colleagues’ actions.

A member of the UK delegation to the United Nations (UN), in a letter dated 20 April, 1948, confirmed the attack on Deir Yassin in which “250 Arab men, women and children” were killed in “circumstances of great savagery”. Palestine, at the time, was a UK Mandate territory pending final status determination by the UN.

Of nearly 70 massacres during the 1948 Nakba, Deir Yassin would become one of those atrocities where almost all the acts of war criminality were unleashed: killing, destruction, pillaging, rape, and displacement.