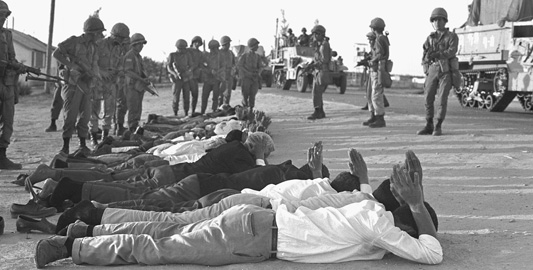 Posted By: Ebtehal Mohamedon: November 02, 2021In: on this day
Print Email

On November 2, 1954, near the village of Deir Ayoub, a brutal Israeli assault on Arab children occurred. At ten o’clock that morning, three children from the Arab village of Yalu went out to collect firewood (a boy aged twelve and two girls aged ten and eight). When they reached a point near Deir Ayyub, about 400 meters from the armistice line, some Israeli soldiers surprised them. One of the two girls fled away. The soldiers shot her, hitting her in the thigh, but she kept running until she reached her village, Yalu, and told her family. The children’s parents rushed to the scene and saw about 12 Israeli soldiers driving the two children in front of them towards the middle of the valley in the south, and there they stopped and shot them, then they disappeared from the armistice line. The parents rushed and found the boy had been killed instantly, and the girl was in her last breath and was taken to the hospital, but she died the next morning.