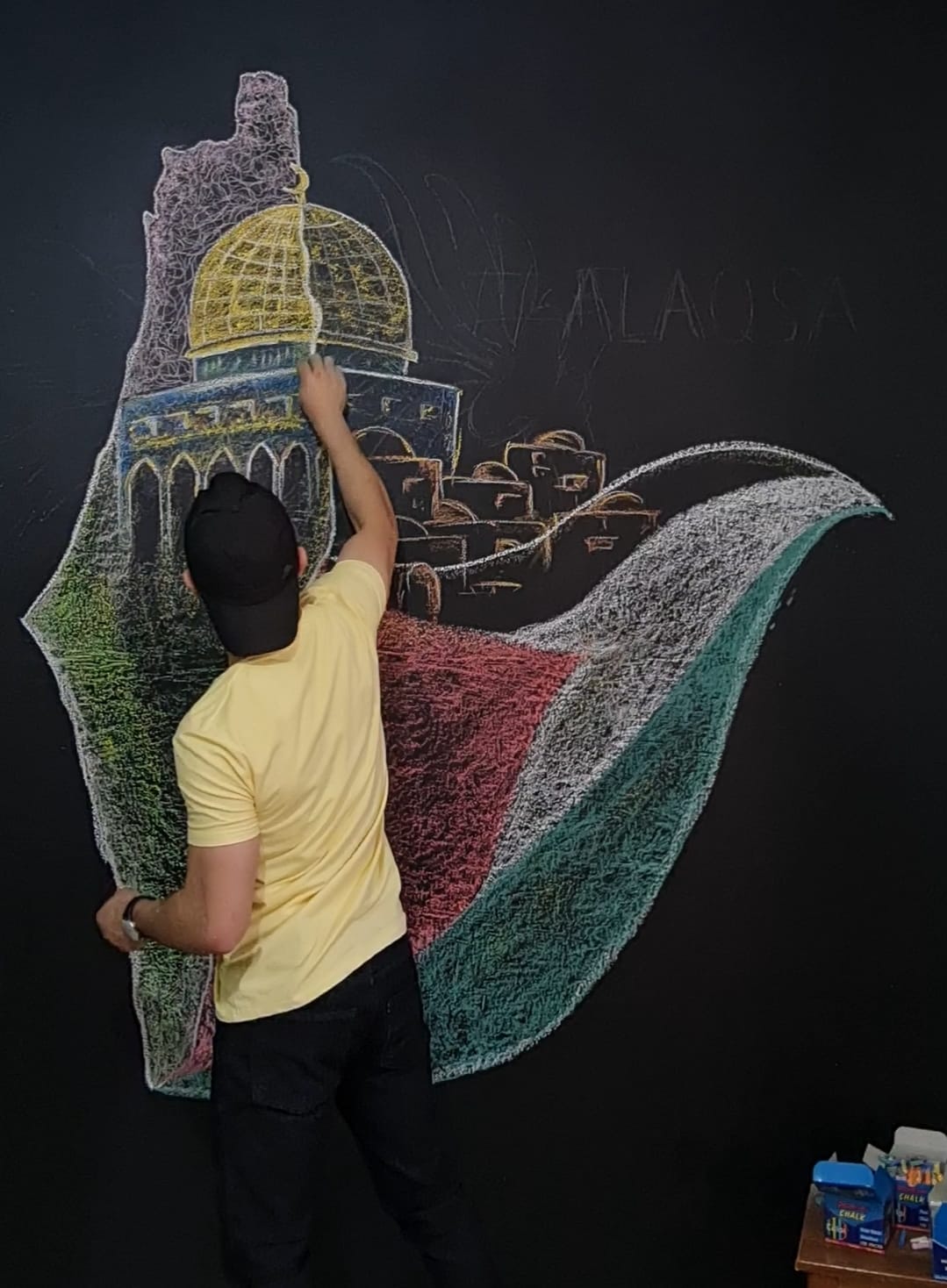 Mahmoud Abu Aljarayish, and the love of Palestine in art

Whether he’s using chalk, boards, canvas, papers, paints, or simply pencil colors, Mahmoud Abu Aljarayish always makes sure that his work of art is essentially expressive of his identity as an artist, and his love for his home country, Palestine.

Growing up in the village of Kharas, northwest of the occupied West Bank city of Hebron, Abu Aljarayish is a promising, passionate artist with a degree in Multimedia and Graphics, who knew he had more advanced skills in art compared to other kids in his classes.

“While kids my age proudly displayed abilities in drawing simple things, I caught the eyes of people around me with my capability and artistry,” he says.

It wasn’t strange for him to receive support from his family and teachers.

As any artist growing up, Abu Aljarayish went through a difficult time in his life, which at one point caused him to completely ditch art and drawing for some time; what was worse for him during that period is that he even felt like he lost his skills.

“As a way to regain my skills back, I started drawing murals using chalk, which was very well-received that some media agencies talked about me and my art. This, in return, gave me back my confidence as an artist, which encouraged me to go back to drawing even stronger and better than before.”

As a flourishing artist, Abu Aljarayish says that he didn’t receive any kind of support whatsoever when he first embraced his art skills. But that all changed when his teachers started signing him up for art competitions. Abu Aljarayish, however; didn’t feel like that was enough as no organization helped introduce him as an artist to the masses or take him to new places with his art. But as he grew as an artist, he got to know what the audiences wanted to see and began to hear of him every time he did something new.

Abu Aljarayish uses art as a way to express himself. He says that he does that when he transforms an ordinary piece into an art piece full of beauty and passion that when people see it, they get a taste of delicacy and refinement everywhere they go. He says that art helps him express himself in such pieces when people see his touches in his drawings.

Being a Palestinian artist is only a source of pride for Abu Aljarayish, who says that Palestine is an award that he’s very proud of.

“Palestinian people witness stuff that other people don’t. It’s such a privilege when a Palestinian kid, living on Palestinian land, grows up to be an artist,” he said as he went on to explain how Palestine is the source of his inspiration as an artist.

“To me, Palestine is the source of power and support that drives me. It’s how I express myself and my identity. It keeps me going. It makes me creative. If what I’m working on is connected to Palestine, it adds more to its artist value,” he says. “Everything we do is connected to Palestine. It’s our identity and existence. It’s the support and hope. It’s everything that gives me the power to produce.”

On his inspirations and favorite artists that he aspires to be like someday, Abu Aljarayish says that nobody has fully impacted his art.

“I do like Naj al-Ali (a well-known Palestinian cartoonist) who invented the character of Handala. I’d like to come up with a similar concept using a new art form that would make people recognize me through,” he added.

“Inspiration comes from our daily life, our relationships with others and observing people’s feelings. It comes from how you see life from your point of view. How you receive feelings and energy. That all impacts and influences an art work,” Abu Aljarayish details on his inspirations.

“I transform such feelings into positive energy and that makes me feel creative. I want people to say that “Mahmoud turned these feelings into art where he can see through his own view.”

On negative feedback and criticism, Abu Aljarayish says that he’s no stranger to people telling him to go find a normal job as art wouldn’t earn him money.

“That’s the worst kind of comment because it makes me feel that people only look at art from a material point of view. But that only made me feel determined to prove them wrong,” he says. “I feel more determined to prove people wrong every time their criticism aims at damaging my artistic thoughts.”

Abu Aljarayish hopes to reach a place where he can be free to express himself and take his art to the world.

“Sometimes, we find ourselves to be in a place where we don’t enjoy the freedom to say what we want through art. I hope to reach the world so everyone can see that we have talents in Palestine that are able to transform the message to the whole world.”