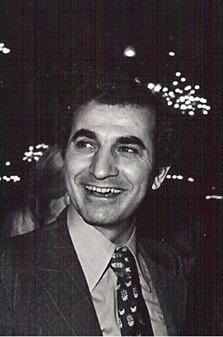 Born in Tantura, near Haifa, in 1936; became refugee with his family during the 1948 Nakba, ending up in Damascus; joined Damascus University to study Chemistry; was politically active with the Communist Party, for which he was imprisoned from 1959-61.

He continued his studies upon his release and graduated in 1963; published short stories in Syrian papers; worked for two years as teacher of Physics and Chemistry in Al-Yamama Secondary School in Riyadh, Saudi Arabia; earned a PhD in Physical Chemistry from the University of Poitiers in Paris in 1969; joined Fateh in France.

Al Qalaq was elected in 1969 as head of GUPS from 1969-70; worked together with PLO representative in Paris, Mahmoud Hamshari, on raising awareness on the Palestine Question in France, especially among leftist circles.

His comrade Mahmoud al-Hamshari was assassinated in February 1973, on the day Izz al-Din stood on his grave and said: “Our revolution is gaining day after day new support, as the number of those who join it increases, and awareness grows, and as the righteous son of the Palestinian people, he firmly played the role that was cast.”

He was appointed as PLO representative to France in 1973, replacing the assassinated Hamshari; among his contributions in documenting Palestinian culture was a collection of Palestinian stamps; started the PLO Cinema Dept. in Paris; was assassinated in Paris on 3 Aug. 1978 and was buried in Al-Shuhada’ cemetery in Damascus; his publications include a story collection entitled Martyrs without Statues (Arabic, 1980) as well as two books on Palestinian stamps, one of which was published in Arabic by the Arab Graphic Society in 1978.

What does Palestine mean for you? The announcer asked him, and he answers: “Palestine is a storehouse of memories, Palestine is my childhood in Haifa, the family entity and the heritage of the parents, but Palestine is not a geographical space, it is a symbol of the struggle that has not yet been accomplished, and it is the light that is born in each of us. “.