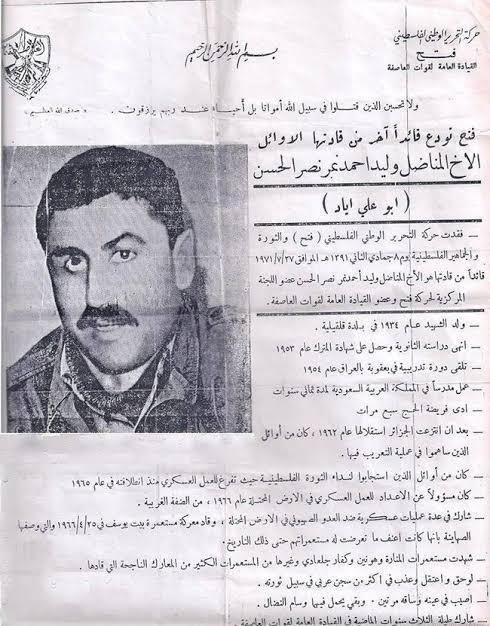 Walid Ahmed Nimr Nasr Al-Hassan was born in Qalqilya on 12/1/1935 and completed his secondary education in 1953, then moved to Iraq where he completed a teacher training course in 1954.

After that he was assigned to work as a teacher in Saudi Arabia and joined the Fatah movement, then moved to Algeria in 1963 and then to Damascus to participate in training and preparing fighters.

In 1966, he was entrusted with the task of preparing for military operations in the occupied territories, starting from the West Bank. During this period, he, along with the leader Abu Ammar, contributed to the recruitment of many Palestinian people to Fatah movement.

During this period of struggle, he led the attack on Joseph’s house on April 25, 1966. This attack was, according to the Israeli leaders’ recognition, one of the most violent attacks on the Israeli settlements until that date. During the same period, he led several operations, including the attack on the settlements of Hunin, Al-Manara, and Kafr Giladi.

In 1966, he left for Syria to train and prepare the storm forces, and took the preparation of convoys of cubs and their care within the framework of the armed Palestinian revolution, where he did not lose sight of the importance of preparing political and military cadres, and focusing on courses to prepare the fighters and advance them politically and militarily.

In the famous “al-Hama camp” in Syria, Abu Ali Iyad was wounded on 28/2/1968 by a mine explosion during training in one of his eyes and his leg, which he replaced with his cane, which still has memories among his Fida’i comrades. However, this severe injury did not prevent him from continuing his struggle and pursuing his revolutionary and leadership responsibilities. A number of trainees were killed in the blast.

After the June War of 1967, he returned to Jordan and was entrusted with the task of leading the Palestinian revolution in the Ajloun region, where he planned dozens of military operations against the Israeli occupation, and during his stay in Jordan carried out several military operations across the Jordan River targeting the occupation camps and colonies.

Among the nicknames given to him by Commander Abu Ammar is “Amroush Palestine”, in comparison to the commanding Algerian military commander, Colonel Amrouche Ait Hammouda, due to his extreme toughness, ability to organize military, strictness in the principle of control and linkage, and revolutionary violence, as he was known for his roughness in harmony with science and the military training he received in Iraq. The title was beloved to his heart, as was the other title given to him by the leader Abu Ammar, which is “Hero of the Mountain.”

Abu Ali Iyad was elected as a member of the Central Committee of Fatah movement as a founder, in the movement’s second general conference, although he did not attend the conference, as he was at that time undergoing treatment at the Mowasat Hospital in Damascus, after an explosive device exploded during training in al-Hama camp. He was also chosen as a member of the General Command of the Asifa Forces. After the establishment of the Palestinian Authority.

In 1996 the municipality of Qalqilya named the martyr on a wide area where several main streets converge, and called it the Martyr Abu Ali Iyad Square in memory of the hero martyr.

It also named the martyr’s name on the oldest school for girls in Qalqilya, and renamed it “Abu Ali Iyad Girls School”, in honor of his good memory.