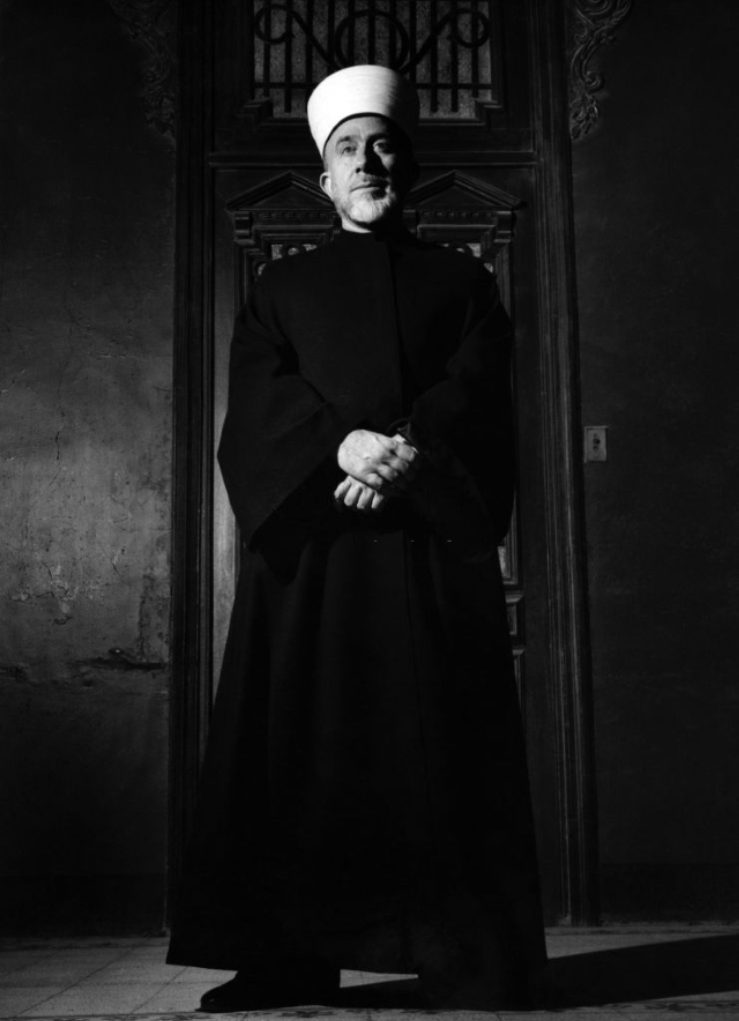 He was educated in Jerusalem and then at al-Azhar Mosque in Cairo. He performed the pilgrimage with his family in 1913, while he was still a young man, and he was called “Haj” until the end of his life.

His father sent him to Istanbul in 1915 to continue his education, but he joined the Military Academy, graduating as a non-commissioned officer. He then joined the Arab Revolt led by Prince Faisal before the end of World War I.

He was appointed in 1918 as special adjutant to the British Military Governor but soon resigned in protest over the pro-Zionist policy of Britain and taught at al-Ma‘arif college in Jerusalem.

He was elected president of the Arab Club in Jerusalem, the first political group in Palestine to publicly reject the Balfour Declaration. In 1920, the British authorities sentenced him to prison in absentia for having led demonstrations that year. He escaped to Karak and from there to Damascus during the Faisal government. He returned to Jerusalem later that year after having been pardoned by the newly appointed High Commissioner, Sir Herbert Samuel. When his elder brother Kamel died, he succeeded him as Mufti in May 1921. In January 1922 he was appointed president of the Supreme Moslem Council, instituted by the High Commissioner, so Haj Amin came to occupy these two important posts until he was driven out of Palestine in 1937. He displayed great energy and determination in these posts; he led the nationalist movement in secret, being wary of the British authorities. He thus became the most prominent and influential Arab leader in the country. The supporters of Haj Amin were known as al-majlisiyyun (council proponents) in reference to the Supreme Moslem Council (al-Majlis). The opposition to the council was led by Raghib al-Nashashibi.

The Zionists accused him of having incited the Buraq/ Western Wall Disturbances of 1929, but the British authorities cleared him of that charge. In 1931, he supervised the convening of the Pan-Islamic Congress in Jerusalem, hoping to mobilize the Muslim world to oppose Zionism, which itself had mobilized its world potential. He chaired the meetings of that congress. That congress firmly established his reputation in the Arab and Islamic spheres. In 1933 he toured a number of Arab countries including Iraq, Kuwait, and Saudi Arabia, urging support for the cause of Palestine, and acted as a mediator to end the fighting between Saudi Arabia and Yemen in 1933. In 1936, and after some hesitation, he presided over the Arab Higher Committee, which included the leaders of all Palestinian parties and which led the general strike of 1936 and the Great Palestinian Rebellion of 1937–39 to protest the partition plan advocated by the Royal Commission chaired by Lord Peel. 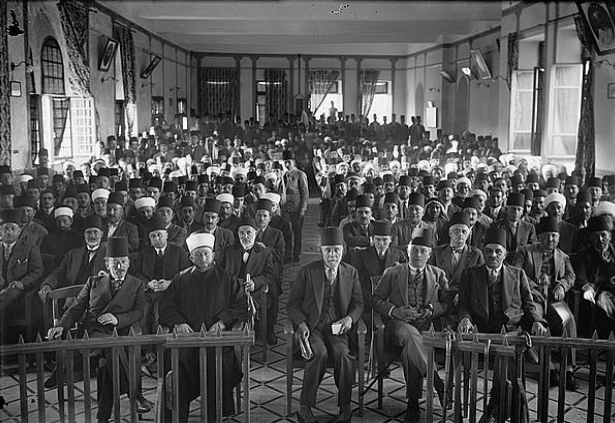 After Arab rebels assassinated Lewis Andrews, British district commissioner for Galilee, in September 1937 soon after publication of the Peel Report, the British Government dismissed Haj Amin from his post as president of the Supreme Moslem Council and decided to arrest all members of the Arab Higher Committee including Haj Amin. He took refuge in the Noble Sanctuary (al-Haram al-Sharif) and then fled to Jaffa and Lebanon from where he continued to lead the revolt until the outbreak of World War II. He escaped from Lebanon and took refuge in Iraq to evade arrest by the French Mandate authorities.

The British government declined to invite Haj Amin to the London Conference of 1939 from which was issued the White Paper of 1939, which Haj Amin rejected. The government did however send an envoy to negotiate with people close to him about the White Paper but British prime minister Winston Churchill, an overzealous supporter of the Zionists, soon aborted these negotiations.

In Iraq, Haj Amin became the focal point of the Iraqi national anti-British movement, which eventually led to the revolt of Rashid Ali al-Kailani.

When the Kailani revolt collapsed in 1941, Haj Amin left Iraq for Iran, and then to Turkey (which refused to grant him asylum) and the Axis Powers, Germany and Italy. Haj Amin spent the war moving between Berlin and Rome and took part in the propaganda war against Britain and France through Arabic radio broadcasts from Axis radio stations.

After the defeat of the Axis powers, Haj Amin attempted without success to seek refuge in Switzerland but was captured by French troops in Germany; he managed to escape. The French authorities turned a blind eye to his “escape” in order to spite London for its role in making France leave Syria and Lebanon after World War II. So, in April 1946, Haj Amin took refuge in Egypt and was a guest of King Faruq. He made Cairo his headquarters because the British authorities would not allow him to return to Palestine.

The Arab League had in 1946 reconstituted the Arab Higher Committee, leaving the post of president vacant. When he arrived in Egypt, Haj Amin assumed its presidency and reorganized it. This organization then led the Palestinian national movement during the last years of the British Mandate and opposed the UN Partition Resolution of 1947. During the years 1946–48, Haj Amin led the Palestinian national movement, moving between Cairo, Beirut, and Damascus but not Baghdad or Amman. When the British Mandate ended, Haj Amin opposed the entry of Arab regular and irregular forces to Palestine to try to prevent partition and the rise of a Jewish state in 1947–48. He asked instead that the Arabs of Palestine be supplied with money and weapons, formed a force called the Holy Jihad made up from local fighters under his leadership, and then organized National Committees in the cities to act for the Arab Higher Committee and called for the formation of a Palestinian Arab Government as soon as the Mandate came to an end. He was also determined to return to Palestine to take charge of all these activities, but the opposition of the governments of Iraq, Transjordan, and Britain prevented the Arab League from agreeing to his plans. In September 1948, the Arab Higher Committee in Gaza proclaimed the formation of the All-Palestine Government, headed by Ahmad Hilmi Abd al-Baqi, with the support of Egypt and the non-Hashemite Arab countries. Haj Amin presided over the Palestine National Council, held in Gaza, which confirmed the legality of that government. However, because of the collapse of the Egyptian front in October and in November 1948, Haj Amin and the government moved to Egypt and remained there. After the Nakba and the signing of the armistice agreements between the Arab states and Israel, followed by the annexation of the West Bank by the Hashemite kingdom of Jordan and the placement of the Gaza Strip under Egyptian administration, the role of Haj Amin and the Arab Higher Committee began to diminish and lose influence. Haj Amin remained in Egypt until 1959 and then moved to Lebanon where he settled and spent the remainder of his life. He advocated the liberation of Palestine by force of arms and oversaw the affairs of Palestinian refugees through the two bureaus of the Arab Higher Committee in Damascus and Beirut. He also travelled among the capitals of the Islamic world to garner support for the cause to which his life was dedicated. Haj Amin al-Husseini was a man of firm and unwavering convictions who never retreated from positions he considered right and just. He played the most important role in Palestinian politics during the Mandate and was keenly attentive to the Arab and Islamic worlds. He sought tirelessly to make the Palestine cause a common concern for these worlds but was unable to bring the Palestinian opposition over to his side. There were many reasons why he failed to organize the Palestinians into a force capable of resisting the Zionist movement, especially during the decisive period when that movement determined to occupy Palestine by force of arms following the UN Partition Resolution of 29 November 1947. That resolution was in any case the result of pressures put on the new and unelected US president Harry Truman, who had succeeded Franklin Roosevelt. Haj Amin died in Beirut in 1974 and was buried in the Martyrs’ Cemetery.