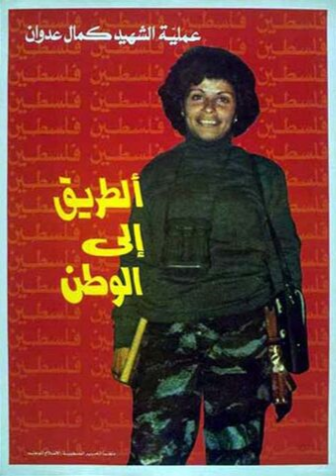 The Martyr Dalal Al-Maghribi is one of the most famous Palestinian activists, she was born in 1958 in a Palestinian refugee camp in Beirut. She is the daughter of a family from the city of Jaffa who sought refuge in Lebanon after Al Nakba of 1948. She was originally educated as a nurse, Dalal Mughrabi decided to devote her life to politics when the Lebanese Civil War broke out in 1975. She decided to join the ranks of the Palestinian revolution and work in the ranks of the Fedayeen in Fatah movement while she was in school, where she received many military courses and lessons during which she was trained in various types of weapons. She was chosen as the head of the group that will carry out an operation inside the occupied interior. They were Ten fedayeen, and the operation was known as “Kamal Adwan”, Her  squad was known as “Deir Yassin.”

On the morning of 3/11/1978, Dalal got off with her squad from a boat that was passing in front of the Palestinian coast, and the group boarded two boats. The landing and arrival operation succeeded, without the Israelis being able to discover it due to the lack of their correct assessment of the Palestinians ’audacity.

Dalal and her band succeeded in reaching Tel Aviv and seized the bus with all its soldiers, while the clash continued with other Israeli elements outside the bus, and this operation resulted in hundreds of dead and wounded on the Israeli side.

After this operation, and because  of the high losses, The Israeli government assigned a special army squad led by Ehud Barak to stop the bus and kill and arrest its passengers. They used planes and tanks were to besiege the fedayeen, which prompted Dalal al-Maghribi to blow up the bus and its passengers, killing the Israeli soldiers. Once the bullets of the Fedayeen was out, Barak ordered to blow the Fidayees with  submachine guns until all of them were martyred.

Nizar Qabbani and Elias Khoury later wrote poets about her and lots of schools and squares in Palestine were named after this heroin.