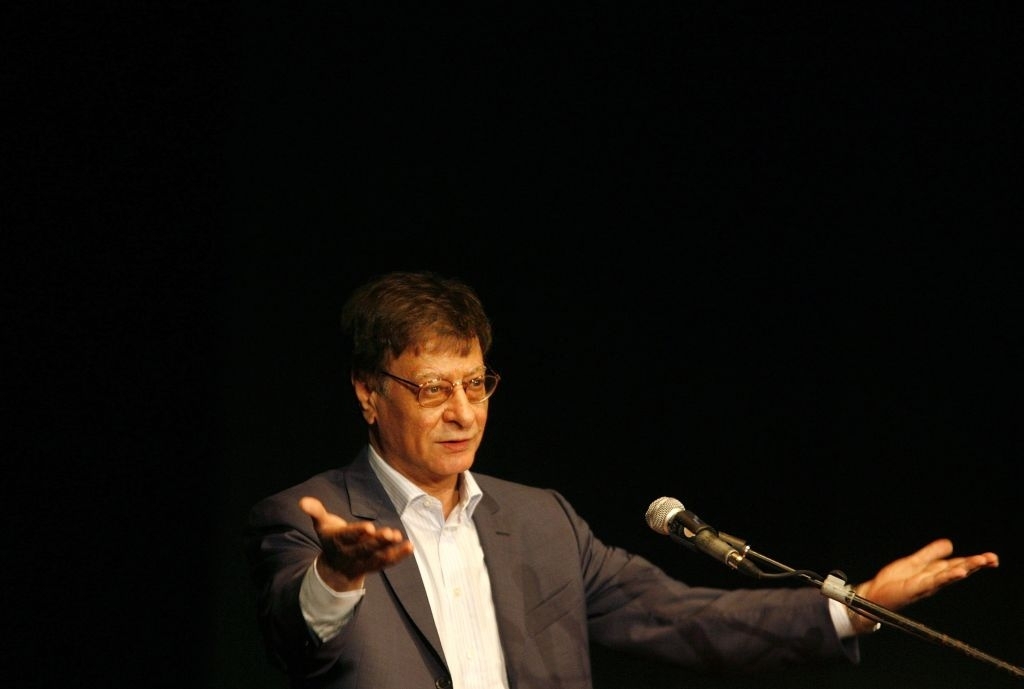 HAIFA, ISRAEL - JULY 15: Palestinian poet and journalist Mahmoud Darwish reads during his poetry show July 15, 2007 in Haifa, Israel. Darwish, seen as a symbol of Palestinian nationalism, made his first appearance in Israel on Sunday since his self-imposed exile from Israel, where he lived until 1971. (Photo by Gil Cohen Magen-Pool/Getty Images)

The Anniversary of Mahmoud Darwish

Posted By: Ebtehal Mohamedon: August 09, 2020In: News, on this day
Print Email

Mahmoud Darwish was born on 13 March 1941 in the village of Birwa (Acre district) to Salim Darwish and Huriyya al-Biqa‘i. He was the second child in a family of five boys and three girls.

At the end of 1947, and following clashes between the Arab inhabitants and the Zionists forces, he, along with some members of his family, sought refuge for a short period in the village of Naima near the town of Damour, southern Lebanon.

In 1949 he and his grandfather returned secretly to Palestine to find that their village had been totally razed by the Israelis and that a settlement and kibbutz had been built on its site. The family then moved for a short while to the village of Deir al-Asad and then settled in the village of al-Jadida, which was not far from his original village. His family members lived without official papers and were classified as “present-absent” since they had returned to Palestine “illegally.”

In his youth Darwish was much influenced by his grandfather, who brought him up and taught him to read and write and bought him books from Acre. From his brother Ahmad, who was a teacher, he acquired his early interest in literature. He completed his elementary education in a school in Deir al-Asad, all the while in hiding, and then continued his secondary school (high school) education in the village of Kfar Yasif.

When he completed his high school education, he moved in 1960 to the city of Haifa where he began to work in the Arab newspapers and magazines. He worked in the newspaper al-Ittihad and in the magazine al-Jadid, which he later edited, and was a member of the editorial board of the magazine al-Fajr, an Arab literary magazine.

In the early sixties he was repeatedly harassed by the Israeli security forces. He was arrested several times, beginning in 1961, and charged for statements he had made or for his writings and political activity. His last imprisonment was in 1969, and he was more than once placed under house arrest.

In early 1970, Darwish travelled to Moscow to study at the Institute of Social Sciences. After one year he dropped out of school and moved to Cairo in early February 1971, having decided not to return to Israel.

In Cairo, he worked at Al-Ahram newspaper, then edited by Mohamed Hassanein Heikal. While there, he met some of Egypt’s most prominent writers, including Naguib Mahfouz, Yusuf Idris, and Tawfiq al-Hakim, and befriended a number of poets like Salah Abd al-Sabur, Ahmad Hijazi, Amal Dunqul, and Abd al-Rahman al-Abnudi. Darwish considered his Cairo phase to be a very important one in his life; it is where his poetic experience took a new turn.

In 1973 he moved to Beirut to work at the PLO Research Center where, a few years later, he became its director and the editor of its monthly journal Shu’un Filastiniyya. In 1981 he founded in Beirut a cultural magazine called al-Karmel. While in Beirut he lived through the first years of the Lebanese civil war, which broke out in April 1975, and was followed by the Israeli invasion of 1982.

He remained in Beirut at the end of August 1982, and he decided to leave only after the Israeli army entered Beirut in September 1982. Some members of the Arab diplomatic corps in Beirut arranged for him to leave Beirut secretly; he headed for Damascus by way of Tripoli in north Lebanon. From Damascus he moved to Tunis where the PLO and its leader had settled after they left Beirut. He continued to edit al-Karmel from Nicosia in Cyprus and then from Paris where he lived, off and on, for about ten years. He often expressed the belief that Paris was where his true poetic talent was born. 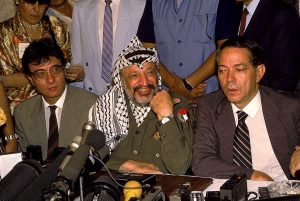 He was president of the Union of Palestinian Writers and Journalists. At the Palestine National Council held in Algiers in 1988, he was elected a member of the Executive Committee of the PLO after having drafted the Declaration of Independence adopted at that session. He resigned later on.

Darwish was married twice; both marriages ended in divorce.

He returned to Palestine in 1995 and divided his time between Ramallah, where he continued to edit al-Karmel, and Amman, with occasional travel elsewhere. He was given permits by the Israeli authorities to visit his mother and the village where he lived as a child.

Darwish, who spoke Hebrew, English, and French, was one of the most internationally prominent Arab poets and one of the few whose poetry cannot be divorced from his life and his cause, a cause he helped to transform from a national to a universal human cause.

In person, Darwish was shy, refined in his manners, and retiring, but he did not isolate himself from the life and people around him. He loved music, especially classical music, and playing backgammon, and took care trouble to prepare Arabic coffee for his friends.

Following his first poetry collection, entitled Birds without Wings (1960), Darwish published twenty-five poetry collections and eleven prose works. His works were translated into more than twenty-two languages. He received great international acclaim and was awarded dozens of prizes and medals, including the Lenin Prize from the Soviet Union (1983), the Legion d’Honneur from the French Culture Ministry (1997), the Dutch Prince Klaus Prize (2004), the Cairo Prize for Arab Poetic Innovation (2007), and the Jerusalem Medal for Culture, the Arts and Literature by decree of President Mahmoud Abbas (2008).

Mahmoud Darwish died in the United States on 9 August 2008, following a heart operation at Texas Medical Center in Houston. Tens of thousands of Palestinians attended his funeral in Ramallah on 13 August; he was buried next to the Ramallah Cultural Palace, on the grounds of a space that hosts today the Mahmoud Darwish Museum and al-Birwa Garden, named after the home village he was forced to leave during the Nakba. A three-day official period of mourning was declared in the occupied Palestinian territories amidst general sorrow for the “lover of Palestine” and one of the most prominent cultural symbols of modern times. 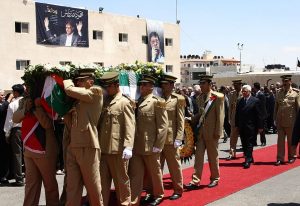 RAMALLAH, WEST BANK – AUGUST 13: In this handout image supplied by the Palestinian Press Office (PPO), Palestinian President Mahmoud Abbas attends the funeral of the great Palestinian poet Mahmoud Darwish, at the Presidential headquarters on August 13, 2008 in Ramallah, West Bank. Darwish died on August 9, 2008, aged 67, following heart surgery in Houston, Texas. Darwish is only the second Palestinian to receive a state funeral since Yasser Arafat in 2004. (Photo by Omar Rashidi/PPO via Getty Images)