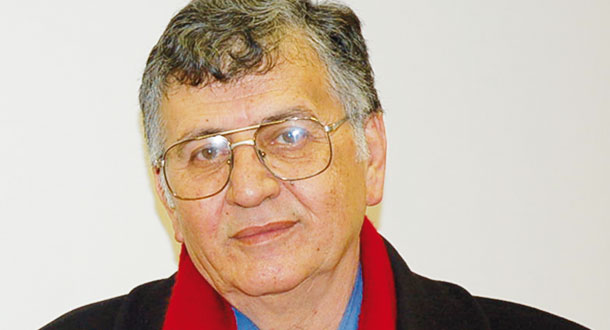 Samih al-Qasim was born in the town of Zarqa in Jordan. His father, Muhammad al-Qasim al-Hussein, was from the village of al-Rama in the Upper Galilee. In 1941, Samih al-Qasim returned with his family to al-Rama and attended the Latin Nuns School and al-Rama School between 1945 and 1953. He then continued his education in Nazareth at the Terra Sancta College between 1953 and 1955 and subsequently at the Municipal Secondary School between 1955 and 1957.

Al-Qasim began his professional career as a government teacher and taught at primary schools in the Galilee and al-Karmel. But the Israeli education minister ordered his dismissal from his post because of his literary, political, and nationalist activities. So he worked at many jobs. He was a worker in the industrial district in Haifa, an assistant electrical welder, a gas station attendant, and inspector in the Urban Planning Department in Nazareth. In 1958, al-Qasim, who was politically close to the banned al-Ard Arab nationalist movement, established a semi-secret organization called the Free Druze Youth Organization.

Al-Qasim began to compose poetry at an early age. His first collection of poems, Pageants of the Sun, was published when he was nineteen years old. His second collection, Songs of the Footpaths, appeared in 1964. His poetic creativity lasted to the end of his life. In one of the last interviews he gave, he said: “I have spent my life in the service of the ode.”

In the early 1960s, al-Qasim began to work as a journalist. This came about as a result of an invitation from the editorial board of the magazine al-Ghadd issued in Arabic in Haifa. By the mid-1960s, he was editing the Arabic edition of the Hebrew magazine HaOlam Hazeh (This World. After he resigned from that magazine, he was invited to join the editorial board of the Haifa daily al-Ittihad, the organ of the Communist Party in Arabic, and al-Qasim settled in Haifa.

On the morning of the Israeli aggression on 5 June 1967, al-Qasim was arrested inside the editorial offices of al-Ittihad newspaper and spent some time in the Damun prison on Mount Karmel. While in prison, he submitted a request for a nominal membership of the Communist Party and some years later was elected a member of the party’s central committee.In 1971 he travelled to Moscow where he studied for a year at the Institute of Social Sciences.

In 1973, Samih al-Qasim helped to establish the Arabesque Publishing House in Haifa and ran the Popular Arts Institute in the same city.

In the early 1970s he became editor of the cultural magazine al-Jadid, published by the Communist Party, and remained its editor for ten years. By the mid-1970s, he had co-founded the Democratic Front for Peace and Equality and was a member of the Druze Initiative Committee as well as the National Committee for the Defense of Arab Lands.

In Nazareth, and along with writer Nabih al-Qasim, he issued a cultural quarterly called Ida’at and was also honorary editor of the newspaper Kull al-‘Arab, which was published in the same city.

Samih al-Qasim is regarded as one of the pillars of contemporary Arabic poetry and one of the most prominent poets of the Palestinian resistance. He made the cause of his Palestinian people his own and illumined its humanitarian and universal aspects. His poetry displays his pride in his Arab identity, attachment to the land, and religious tolerance. A number of his poems have been turned into revolutionary songs that circulated widely.

Following his first collection of poetry, Pageants of the Sun (1958), he published over the course of his career more than seventy books, including poetry collections, prose works, and plays, and his works have been translated into more than ten languages. He won many prizes and medals, including the prize at the Grenada International Festival “Poesía en el Laurel”; the prize for the best translation into French in 1988 for selections from his poems by the Moroccan writer and poet Abdellatif Laâbi; the prize for poetic creativity awarded by the Kuwaiti  Al-Babtain Foundation; the Jerusalem Medal for Culture, the Arts and Literature awarded by the late Palestinian president Yasir Arafat; the Naguib Mahfouz Prize for an Arab author awarded by the Egyptian Writers’ Union; and the Palestine Prize for Poetry awarded by the Palestinian Ministry of Culture.

Samih al-Qasim died in Safad Hospital. His body was carried to his village al-Rama where thousands turned out for his funeral from the Arab villages and towns in Israel.