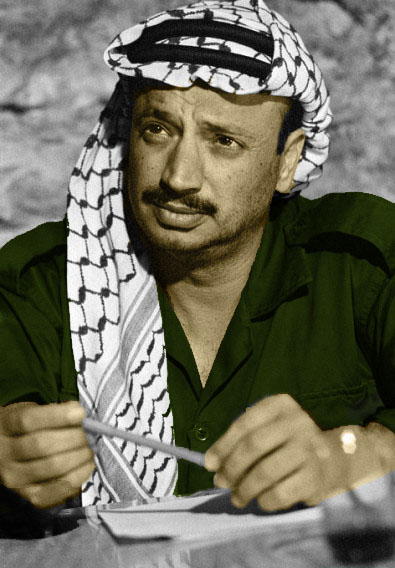 Mohammed Abdel-Raouf Arafat Qudwa al-Hussaeini was born on August 4, 1929 in Jerusalem, was known popularly as Yasir Arafat and Abu Ammar, When he finished his secondary school education in 1949, he enrolled in the Faculty of Civil Engineering at Fuad I University, and was an active member at a young age in the Palestinian national movement through his activities in the Palestine Student Union, which he later became its president.
He participated as a reserve officer in the Egyptian army in fighting the tripartite aggression against Egypt in 1956.
He also joined a group of Palestinian nationalists in the founding of the Palestinian National Liberation Movement (Fatah) in the 1957.
He was elected chairman of the Executive Committee of the Palestine Liberation Organization (PLO) in February 1969 after Ahmad Shuqeiri and Yehya Hammoudeh.
On 13 November 1974, Arafat delivered a historic speech before the UN General Assembly in New York, in which he announced that, in the name of the Palestinians, he carried a freedom-fighter’s gun in one hand and an olive branch in the other, indicating his readiness to accept a just political settlement. On 22 November, the General Assembly recognized the right of the Palestinians to self-determination and national independence and granted the PLO observer status at the UN.
In 1987, Arafat directed the first uprising, the stone Intifada, which broke out in Palestine against the Israeli occupiers in December of that year. At the same time, he fought political battles at the international level for the recognition of the Palestinian people and their just cause and aspirations.
Yasser Arafat and former Israeli Prime Minister Yitzhak Rabin signed on September 13, 1993 in the White House the Oslo Declaration of Principles between the PLO and the Israeli government, which allowed Yasser Arafat and the PLO leadership and fighters to return to Palestine after living in exile since 1948.
His life was one of constant travel, moving from country to country to promote the Palestinian cause, always keeping his movements secret, Arafat awarded the Nobel Prize for Peace in 1994.
Appearance and accent notwithstanding, Arafat’s extraordinary life and career provide a record of unparalleled dedication, uncommon self-confidence and almost foolhardy persistence against all odds.
His untiring work ethic was one of his most powerful assets: this was a man who took no break or time off during his active political career.
Yasser Arafat has gone, but he left behind a legacy of struggle and a national strategy that had established for an approach followed by the founding leaders, headed by President Mahmoud Abbas.