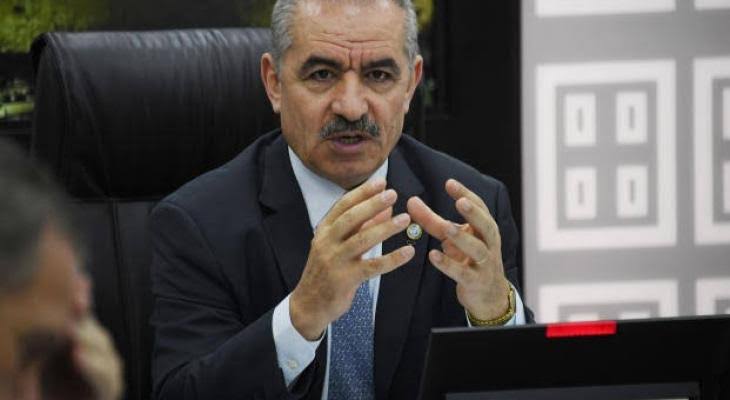 Prime Minister Mohammad Shtayyeh yesterday urged the British government to recognize Palestine as a state in line with the UK parliament’s motion calling for such recognition.

Addressing UK parliamentarians in a briefing to the Britain-Palestine All-Party Parliamentary Group with the attendance of Palestinian ambassador to the UK, Husam Zomlot, Shtayyeh underscored the importance of this recognition as a means to prevent Israel’s impending move to annex large swaths of the West Bank.

He slammed Israel’s annexation move as “a part of a systematic destruction of a future Palestinian state” and not only as “a serious existential threat for us as a people and future state,” but also as a regional threat.

He reiterated President Mahmoud Abbas’ warning that Palestine would cancel all agreements with the US and Israeli governments over annexation.

“If Israel is really going to annex certain parts of the West Bank, for us the whole Palestinian-Israeli agreements are finished,” he announced.

Highlighting Israel’s lack of interest in peacemaking, Shtayyeh remarked: “this coalition in Israel today is not a coalition for peace”, but is one that “does give Netanyahu a green light to annex.”

“The debate in Israel today, very unfortunately, is not between peace and occupation, and not between to annex and not to annex, but is about what to annex,” he added.

He reiterated that Israeli Premier Benjamin Netanyahu’s policies, including the ongoing Gaza siege, home demolitions, land expropriation and the shoot-to-kill policy, are intended to devastate the Palestinian Authority (PA).

“Netanyahu’s policies are not about the destruction of the two-states, but also are designed to systematically destroy of the national component of the PA. Netanyahu wants this authority to be only service provider.”

He called on the British government to adopt a double-track approach of both explaining to Washington the dangers of annexation move and warning Israel that it has to pay dearly for it.

“It is time that the British government, the British parliament, the public should really think seriously of imposing sanctions on Israel if Israel really goes into the direction of violation of international law,” he said.

Discussing the reasons behind the failure of the peace process, Shtayyeh blamed the failure to reach an agreement on Israel’s use of the peace talks “as an umbrella for the continuation of the colonization program” besides dishonest US brokerage.

He reiterated the Palestinian leadership’s readiness to engage in any “serious negotiations” based on international law and UN resolutions through an international conference.

In order for the peace process to be serious, Shtayyeh explained, it should be based on agreed-upon terms of reference (international law and relevant UN resolutions) and a serious timeline coupled with honest international mediation that would effectively break the monopoly of the US, and confidence-building measures.